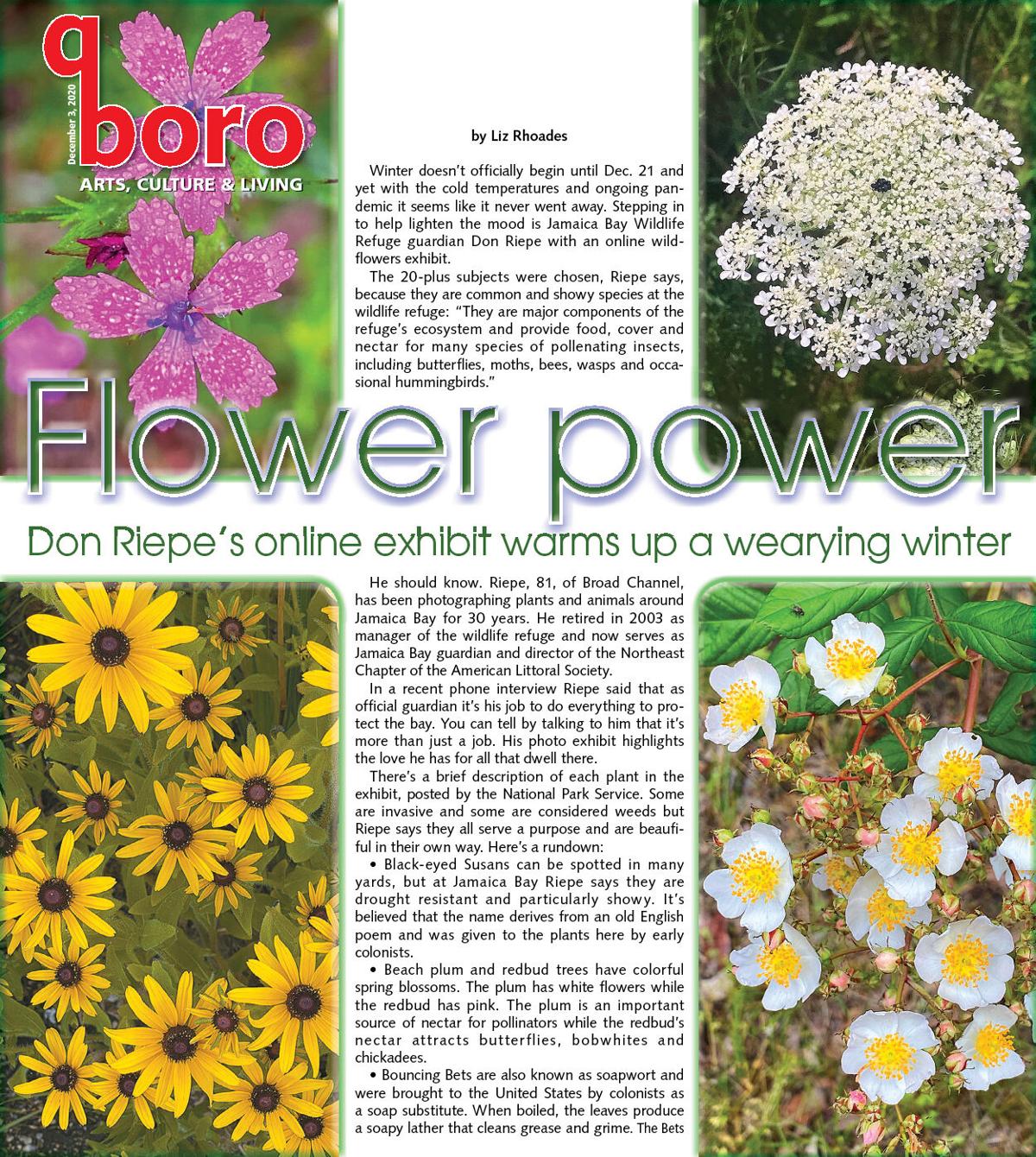 More flowers and plants in the exhibit. 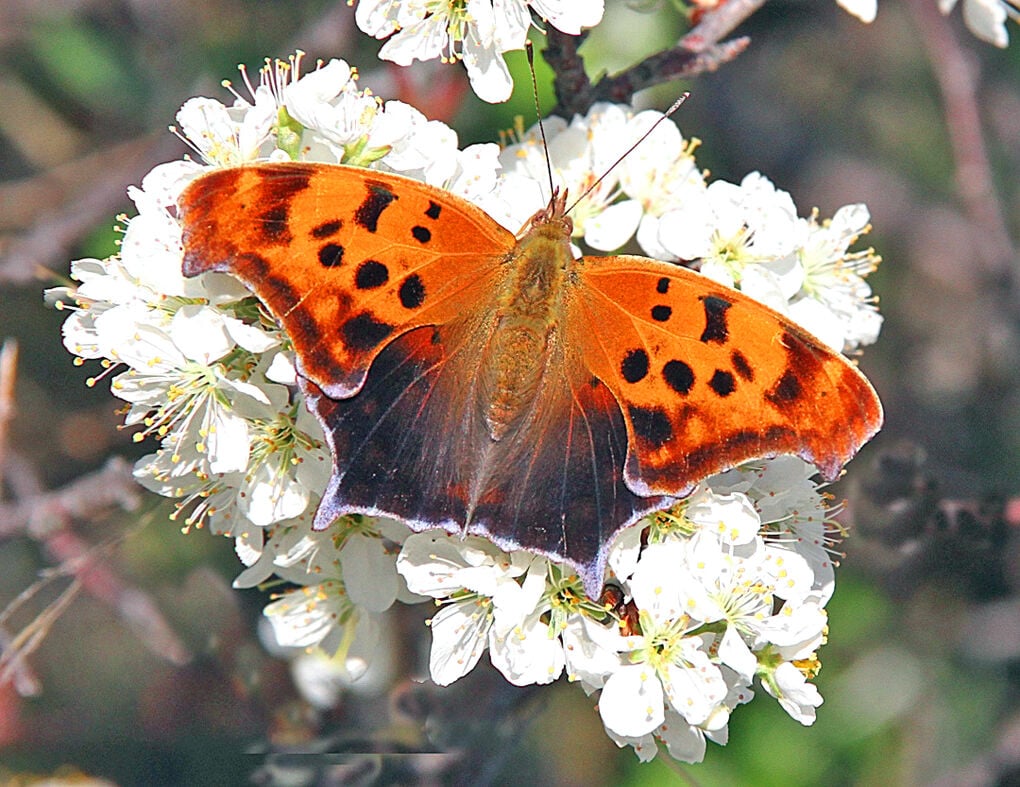 A beach plum draws a question mark butterfly on Jamaica Bay, in a photo from Don Riepe’s online exhibit with the National Park Service.

More flowers and plants in the exhibit.

A beach plum draws a question mark butterfly on Jamaica Bay, in a photo from Don Riepe’s online exhibit with the National Park Service.

Winter doesn’t officially begin until Dec. 21 and yet with the cold temperatures and ongoing pandemic it seems like it never went away. Stepping in to help lighten the mood is Jamaica Bay Wildlife Refuge guardian Don Riepe with an online wildflowers exhibit.

The 20-plus subjects were chosen, Riepe says, because they are common and showy species at the wildlife refuge: “They are major components of the refuge’s ecosystem and provide food, cover and nectar for many species of pollenating insects, including butterflies, moths, bees, wasps and occasional hummingbirds.”

He should know. Riepe, 81, of Broad Channel, has been photographing plants and animals around Jamaica Bay for 30 years. He retired in 2003 as manager of the wildlife refuge and now serves as Jamaica Bay guardian and director of the Northeast Chapter of the American Littoral Society.

In a recent phone interview Riepe said that as official guardian it’s his job to do everything to protect the bay. You can tell by talking to him that it’s more than just a job. His photo exhibit highlights the love he has for all that dwell there.

There’s a brief description of each plant in the exhibit, posted by the National Park Service. Some are invasive and some are considered weeds but Riepe says they all serve a purpose and are beaufiful in their own way. Here’s a rundown:

• Black-eyed Susans can be spotted in many yards, but at Jamaica Bay Riepe says they are drought resistant and particularly showy. It’s believed that the name derives from an old English poem and was given to the plants here by early colonists.

• Bouncing Bets are also known as soapwort and were brought to the United States by colonists as a soap substitute. When boiled, the leaves produce a soapy lather that cleans grease and grime. The Bets term refers to English barmaids called Bets who cleaned ale bottles by filling them with water and a piece of the plant. When shaking the bottles to clean, bouncing Bet was created.

• Deptford pink is originally from Europe and got its name from an area in England. It came to the United States accidentally in livestock feed among other things.

• Orange milkweed is showy but doesn’t attract most butterflies except for pearl crescents and American coppers.

• Prickly pear cactus is low growing and produces yellow flowers in June. Bees love it. Its fruit is eaten by small mammals.

• Common mullein is tall and spiky, with yellow flowers. It’s sold as a cold remedy.

• New England aster is late flowering with violet to lavender-pink petals. It provides nectar for monarchs and other insects.

• Salt spray rose has lovely pink blossoms and is widely seen in coastal gardens but beware, it is invasive. Its seed pods known as rose hips are high in vitamin C and provide food for insects, birds and small mammals.

• Multiflora rose has white blooms from May to early June. It’s also invasive but provides good shelter and food for birds, especially mockingbirds.

• Chicory flowers are also known as blue sailors. You see these often by the side of the road. The roots can be roasted and used as a coffee substitute. Legend has it that a maiden waited at the roadside for her sailor to return from sea but he never came. She was so loyal waiting for him that the gods transformed her into a roadside plant.

• Trumpet creeper is commonly seen with its orange flowers and vine wrapped around utility poles and fences. It is invasive but attracts insects and hummingbirds.

• Dandelions are ubiquitous and need little description. Their April flowering is good for feeding early butterflies and other insects.

• Seaside goldenrod blooms in late September and October. It’s important for monarchs, painted ladies, buckeyes and other migrating butterflies. Riepe says it’s a myth that the plant causes hay fever. He says ragweed is the culprit.

• Queen Anne’s lace is another roadside regular with lovely white flowers. Its nectar is popular with insects and black swallowtail butterflies lay their eggs on it.

• Poison ivy is one plant not to touch as its oil causes a nasty rash. Riepe says it has a lovely leaf and birds eat its berries in the fall.

• Yucca is a perennial evergreen with white flowers that have thorny tips. It likes dry soil.

After seeing the exhibit viewers may want to purchase seeds or plants for their own gardens. Riepe says to go online and check out seed companies for availability. He added that Pinelands Nursery in New Jersey has a good selection of plants.

While summer may seem like a distant memory now, what better way to bring it back than viewing this lovely wildflower show? Go to nps.gov/gate/plan your visit/jamaica-bay-wildflowers. The exhibit will remain online for the next several months.

The refuge is open all year at 175-10 Cross Bay Blvd. in Broad Channel from 6 a.m. to 8 p.m. Trails are open but the visitors center is closed during the pandemic.