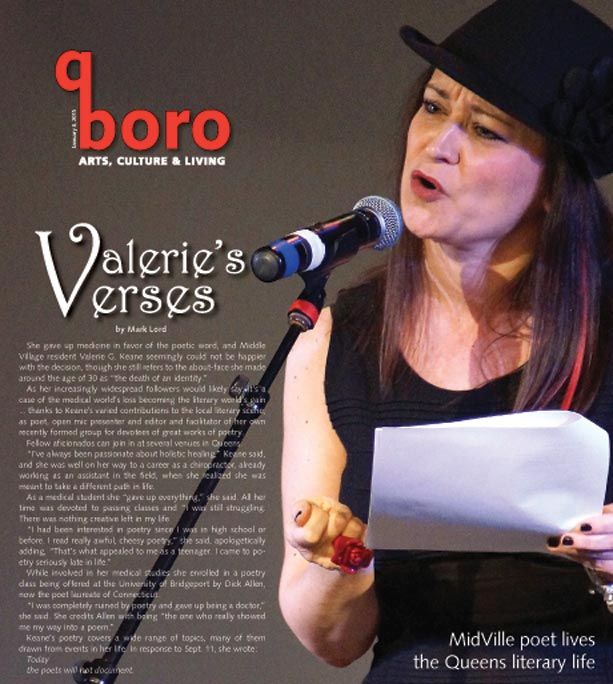 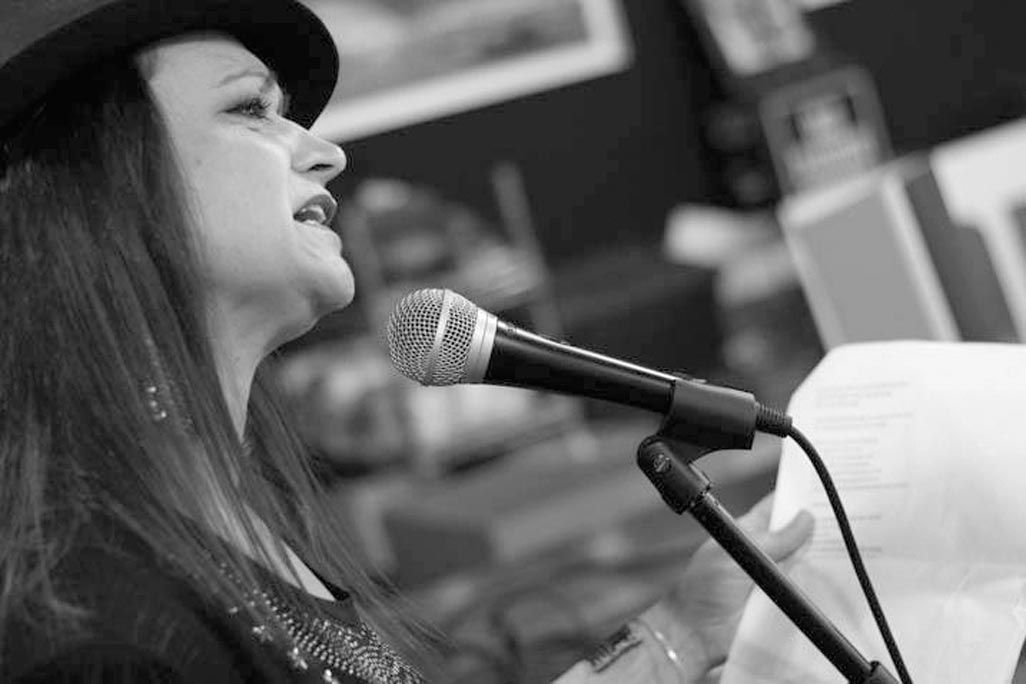 Valerie G. Keane reads her work at an open mic event at Coffeed in Long Island City. On the cover, she reads at the LaGuardia Performing Arts Center.

Valerie G. Keane reads her work at an open mic event at Coffeed in Long Island City. On the cover, she reads at the LaGuardia Performing Arts Center.

She gave up medicine in favor of the poetic word, and Middle Village resident Valerie G. Keane seemingly could not be happier with the decision, though she still refers to the about-face she made around the age of 30 as “the death of an identity.”

As her increasingly widespread followers would likely say, it’s a case of the medical world’s loss becoming the literary world’s gain ... thanks to Keane’s varied contributions to the local literary scene, as poet, open mic presenter and editor and facilitator of her own recently formed group for devotees of great works of poetry.

Fellow aficionados can join in at several venues in Queens.

“I’ve always been passionate about holistic healing,” Keane said, and she was well on her way to a career as a chiropractor, already working as an assistant in the field, when she realized she was meant to take a different path in life.

As a medical student she “gave up everything,” she said. All her time was devoted to passing classes and “I was still struggling. There was nothing creative left in my life.

“I had been interested in poetry since I was in high school or before. I read really awful, cheesy poetry,” she said, apologetically adding, “That’s what appealed to me as a teenager. I came to poetry seriously late in life.”

While involved in her medical studies she enrolled in a poetry class being offered at the University of Bridgeport by Dick Allen, now the poet laureate of Connecticut.

“I was completely ruined by poetry and gave up being a doctor,” she said. She credits Allen with being “the one who really showed me my way into a poem.”

Keane’s poetry covers a wide range of topics, many of them drawn from events in her life. In response to Sept. 11, she wrote:

the poets will not document.

in search of reclaiming wholeness —

And in the brilliant sun,

the birds go on pecking at gravel

That piece, entitled “Ontologism,” speaks not only about that specific day, Keane explained, but “to how we retain faith and go on after any horrific event.”

In another piece, “Untitled Room,” she considers “how we wrestle with what happens after death and perhaps how our religious concepts influence our thinking on that.”

In part, the poem, which is printed in its entirety in the Newtown Literary Journal, the borough’s own literary publication, says:

There is a room that is bigger than the world

And it is not the only one.

It tells the patient the truth and soothes his brow.

In some rooms, a father sits at a table and blesses the meal.

In another room, a lotus is placed in a hand.

The rooms have different sections:

In one, a dragon is breathing.

In one, a young boy prepares for combat.

In the last, a woman respires on a couch and knows.

As if her many other activities were not enough to keep her busy, Keane was recently named to the editorial board for poetry for the journal, which is accepting submissions of original works through Jan. 10.

Originally from Westchester, Keane moved to Rochester for a spin and ultimately settled in Queens.

“It was the first time I really felt like I was home,” she said. “Maybe it’s in my DNA.” The borough was, after all, the place where her maternal great-grandparents settled when they arrived in this country from their native Czechoslovakia.

Keane decided to pursue a degree as an English major at Queens College, where she found herself attending many poetry workshops, but “life got in the way,” and she was forced to leave school for full-time employment.

But, she said, “I realized there was so much great poetry around me.” She continued to attend readings around the borough, “to absorb, and listen, and learn.”

Today, at the age of 44, Keane supports herself as a freelancing business consultant. But, she is quick to point out, “There’s been a constant love of poetry.”

It was on New Year’s Day in 2013 that Keane put together a list of things she wanted to do in life. “Not a bucket list,” she said, but one that consisted of “little things and big things.”

By June of that year she began to get involved in earnest in the poetry scene.

“I still can’t wrap my head around it,” she said, of the demand placed on her poetic talents.

Now, she attends poetry readings at least once or twice every week. “It could be four or five events,” she said. “There’s enough going on in Queens so you can absolutely do that. There are so many venues. Each has its own flavor.”

She is particularly proud of “Poetry & Coffee,” an event she started about a year ago that brings together lovers of verses in a discussion of great poems. “Everyone brings a poem that they love from a great poet. You cannot read your own work. The inspiration that comes out is unbelievable,” Keane said.

The get-togethers happen one Sunday each month at Omonia Cafe (32-20 Broadway in Astoria), the next being on Jan. 11 at 6 p.m. Tickets are free and may be obtained, along with further information, at brownpapertickets.com/event/1075669.

Keane also will be featured at Nature of the Muse, a fireside reading/live-writing show in which writers read from their works and then write live from random prompts written by the audience. The event, on Jan. 29 at Long Island City Bar (45-58 Vernon Blvd.), runs from 7:30 to 9:30 p.m. More information on this event may be found at audreydimola.com.