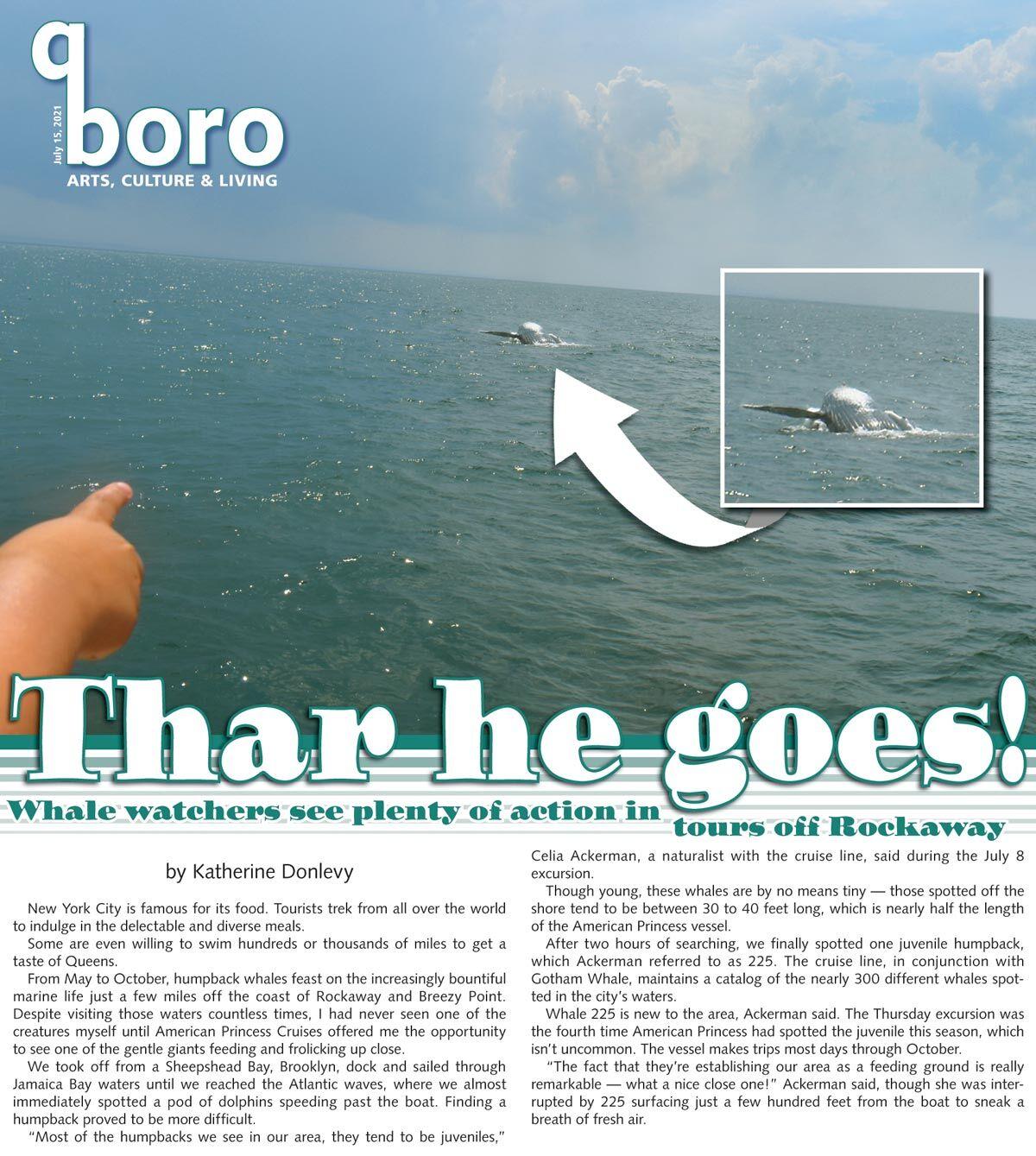 Whale 225 shows off his massive fins and belly as he feasted on some bait balls. 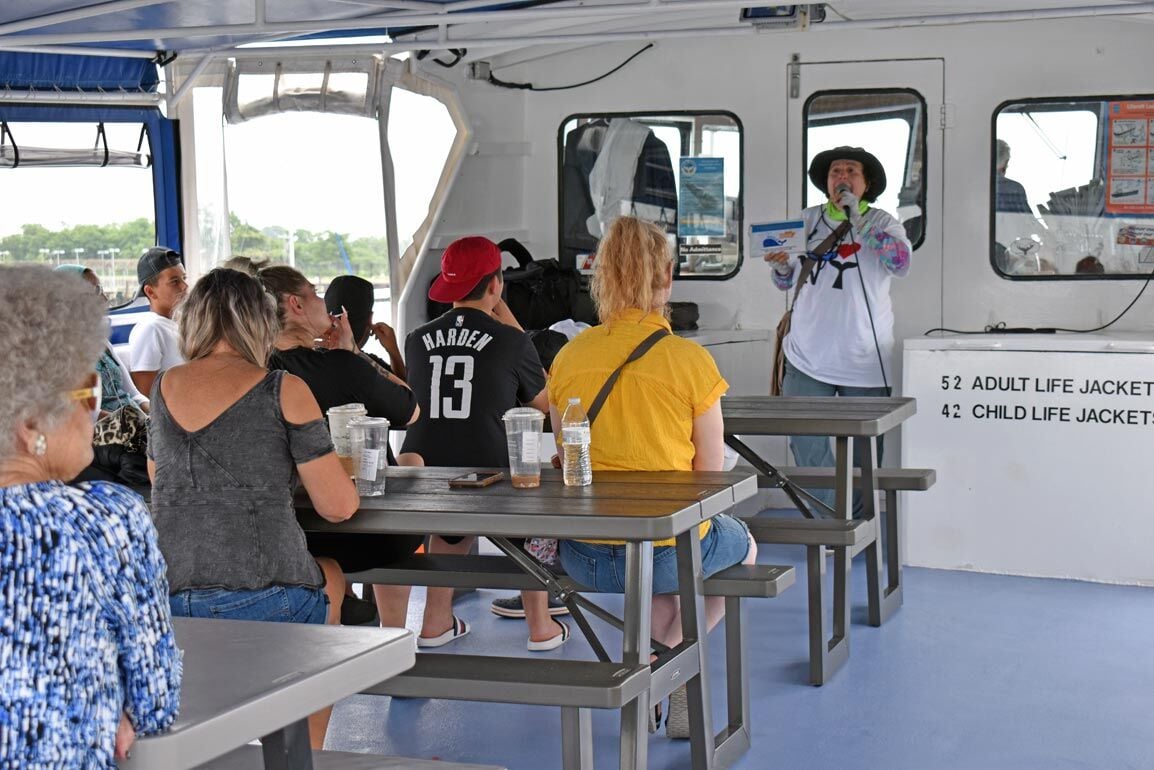 Naturalist Celia Ackerman gives a quick rundown on the history of humpback whales along the New York City shore.

Whale 225 shows off his massive fins and belly as he feasted on some bait balls.

Naturalist Celia Ackerman gives a quick rundown on the history of humpback whales along the New York City shore.

New York City is famous for its food. Tourists trek from all over the world to indulge in the delectable and diverse meals.

Some are even willing to swim hundreds or thousands of miles to get a taste of Queens.

From May to October, humpback whales feast on the increasingly bountiful marine life just a few miles off the coast of Rockaway and Breezy Point. Despite visiting those waters countless times, I had never seen one of the creatures myself until American Princess Cruises offered me the opportunity to see one of the gentle giants feeding and frolicking up close.

We took off from a Sheepshead Bay, Brooklyn, dock and sailed through Jamaica Bay waters until we reached the Atlantic waves, where we almost immediately spotted a pod of dolphins speeding past the boat. Finding a humpback proved to be more difficult.

“Most of the humpbacks we see in our area, they tend to be juveniles,” Celia Ackerman, a naturalist with the cruise line, said during the July 8 excursion.

Though young, these whales are by no means tiny — those spotted off the shore tend to be between 30 to 40 feet long, which is nearly half the length of the American Princess vessel.

After two hours of searching, we finally spotted one juvenile humpback, which Ackerman referred to as 225. The cruise line, in conjunction with Gotham Whale, maintains a catalog of the nearly 300 different whales spotted in the city’s waters.

Whale 225 is new to the area, Ackerman said. The Thursday excursion was the fourth time American Princess had spotted the juvenile this season, which isn’t uncommon. The vessel makes trips most days through October.

“The fact that they’re establishing our area as a feeding ground is really remarkable — what a nice close one!” Ackerman said, though she was interrupted by 225 surfacing just a few hundred feet from the boat to sneak a breath of fresh air.

“Usually the young calves learn where the feeding grounds are by undertaking that very long migratory journey with their moms from the mating-calving grounds where they were born to her favorite feeding ground locations,” she continued. “During that time, that’s when the mom teaches them the different feeding techniques ... The fact that these young juveniles are coming here to feed and they did not learn this location from their mothers, you can kind of say they’re trailblazers in a sense.”

Though new, 225 was eager to show off. We slowly drifted behind him as he feasted on some “bait balls,” or clusters of feeding fish, for nearly 40 minutes. Ackerman warned the group to look out for signs of surfacing, such as “spouting,” or the spray from the whale’s blowhole.

Like a dolphin, a humpback displays a dorsal fin as it comes up for a breath of air, though the whale stays above the surface for a much longer period of time than the smaller dolphin.

The most exciting part of the trip was when 225 performed a half-breach about a hundred feet from the boat. He didn’t come all the way out of the waves, but he showed us his big, white belly before plopping back into the depths.

“That was so beautiful and we will take that!” Ackerman said.

Witnessing a humpback in the wild is becoming less rare, though it’s never a guarantee, Ackerman said, and any chance to observe the animal is a treat.

The New York City whale population is growing due to conservancy efforts. The water is becoming cleaner, and strict laws protecting wildlife have created an environment that encourages whales to return year after year. When Gotham Whale first started recording their appearances in 2011, only five were spotted.

Additionally, American Princess participates in the whale SENSE program, which follows procedures that protect the marine wildlife: We only approached 225 parallel to his course of travel and never deliberately chased him. To thank us for our appreciative behavior, 225 gave us an exclusive view into his exotic lifestyle.