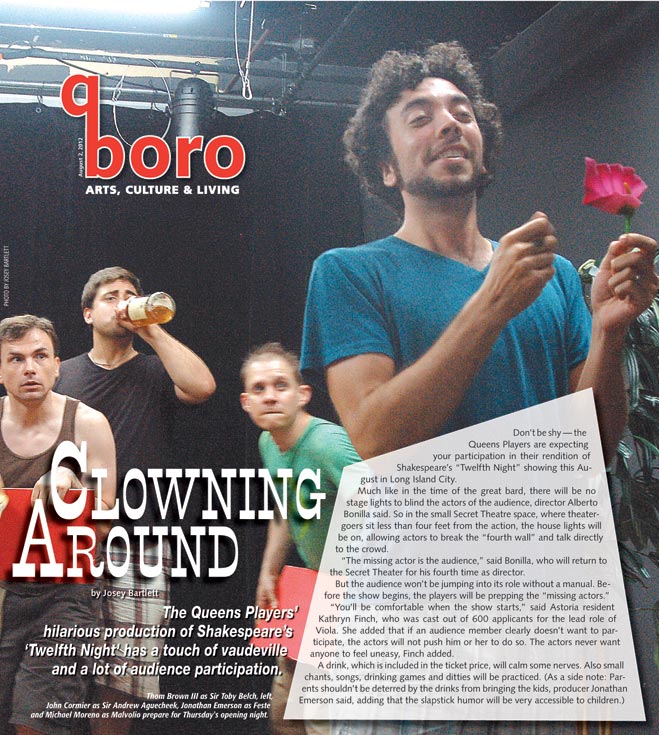 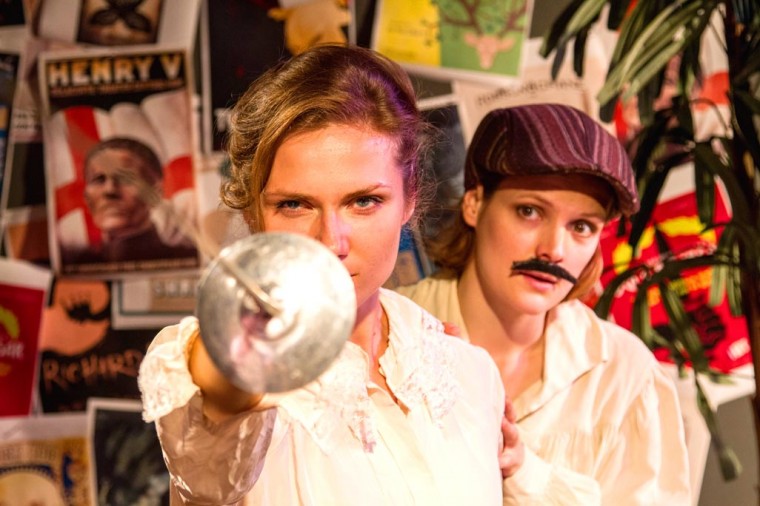 Don't be shy — the Queens Players are expecting your participation in their rendition of Shakespeare's 'Twelfth Night' showing this August in Long Island City.

Much like in the time of the great bard, there will be no stage lights to blind the actors of the audience, director Alberto Bonilla said. So in the small Secret Theatre space, where theatergoers sit less than four feet from the action, the house lights will be on, allowing actors to break the "fourth wall" and talk directly to the crowd.

The missing actor is the audience, said Bonilla, who will return to the Secret Theater for his fourth time as director.

But the audience won't be jumping into its role without a manual. Before the show begins, the players will be prepping the "missing actors."

"You'll be comfortable when the show starts," said Astoria resident Kathryn Finch, who was cast out of 600 applicants for the lead role of Viola. She added that if an audience member clearly doesn't want to participate, the actors will not push him or her to do so. The actors never want anyone to feel uneasy, Finch added.

A drink, which is included in the ticket price, will calm some nerves. Also small chants, songs, drinking games and ditties will be practiced. (As a side note: Parents shouldn't be deterred by the drinks from bringing the kids, producer Jonathan Emerson said, adding that the slapstick humor will be very accessible to children.)

'Twelfth Night,' Shakespeare's famed comedy about mistaken identity, begins with Viola shipwrecked on the shores of Illyria. She loses everything, including believing her twin brother, Sebastian, died in the wreck, but picks herself up and moves forward.

"She's the most resourceful character I have seen," Finch said. "She's tough shoes to fill."

Viola disguises herself as a young male page, Cesario, and with the help of a sea captain meets Duke Orsino, whom she falls madly in love with. However, the Duke thinks sheís a boy and, as luck will have it, is in love with Lady Olivia. Regarding Cesario a confidant, the duke asks him (who really is a she) to try to woo Olivia for him, even though Olivia wants nothing to do with the duke.

And through it all, as a subplot, characters are trying to trick Mavolio, Oliviaís head steward, into thinking Olivia wants to marry him.

Malvolio has a fall from grace, said Astoria resident Mike Moreno, who plays the full-of-himself character. And since the audience has helped with the trickery as an integral part of play, the crowd will feel responsible when this character sinks into a dark place of despair, Bonilla said.

This is all in the original Shakespeare text, which the Queens Players use — however, some liberties are taken.

"Shakespeare can be explored in many ways, which gives it longevity," Moreno said.

Bonilla was inspired to create a more interactive 'Twelfth Night' production by a performance of the play he saw done by the Royal Shakespeare Company in Stratford-upon-Avon.

"They had taken it and made it funny and tragic at the same time," he said, adding, "that they didn't shy away from it being dark."

Growing up in Arizona, he saw a lot of what he calls hoity-toity interpretations of Shakespeare. In his production he wants that mix of tragedy and hilarity, as well as accessibility. That's where the feel of vaudeville clowning — aka audience participation — comes in. For example, the audience knows Viola is a girl pretending to be a boy. (In Shakespeare's day it would have been a boy, playing a girl who was dressing up as a boy. Talk about mistaken identity.) So when the duke finds out she's a girl, the audience already has the inside scoop. Instead of being surprised, they feel mischievous along with Viola.