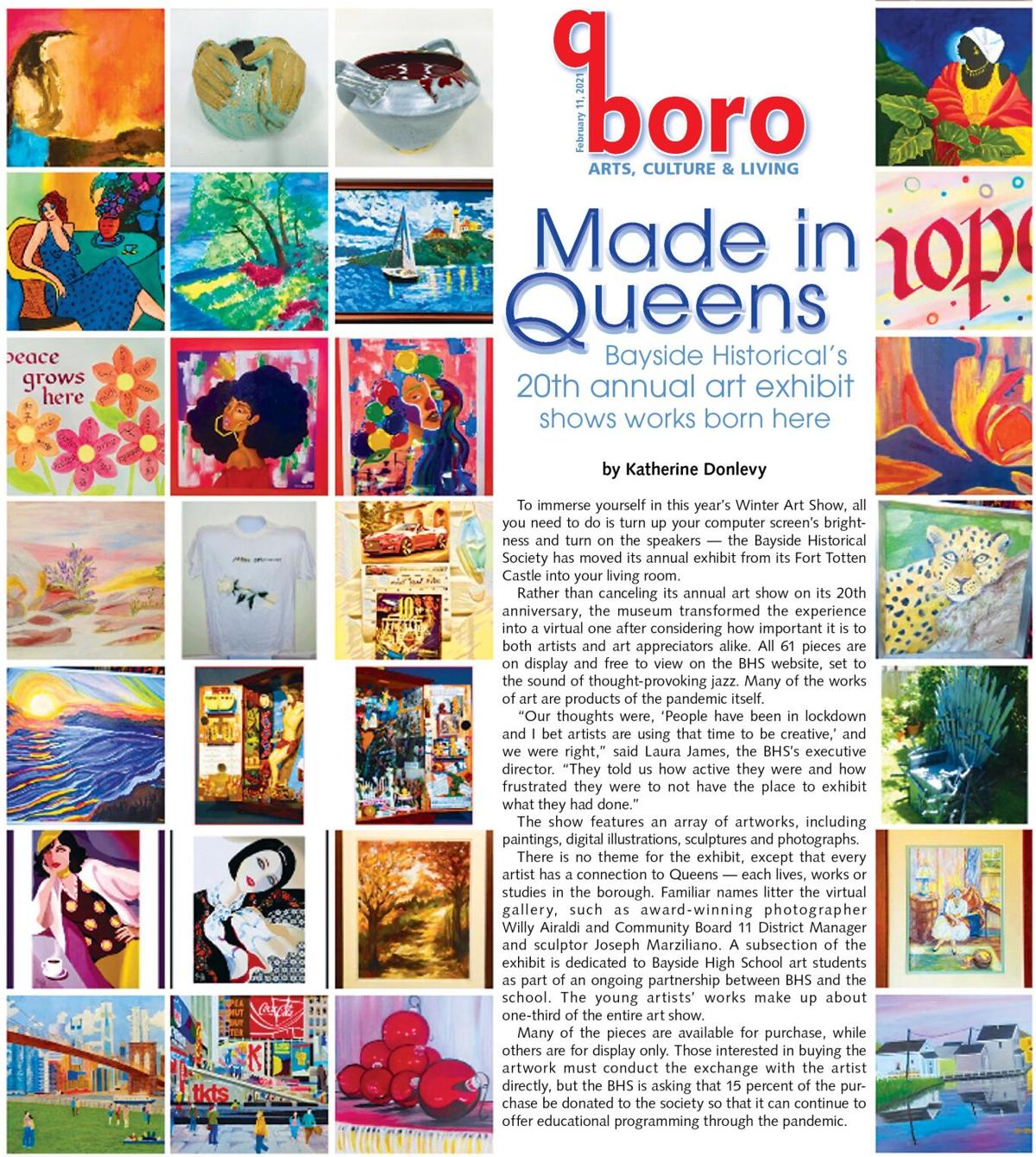 The gallery includes various forms of artwork from 61 Queens artists 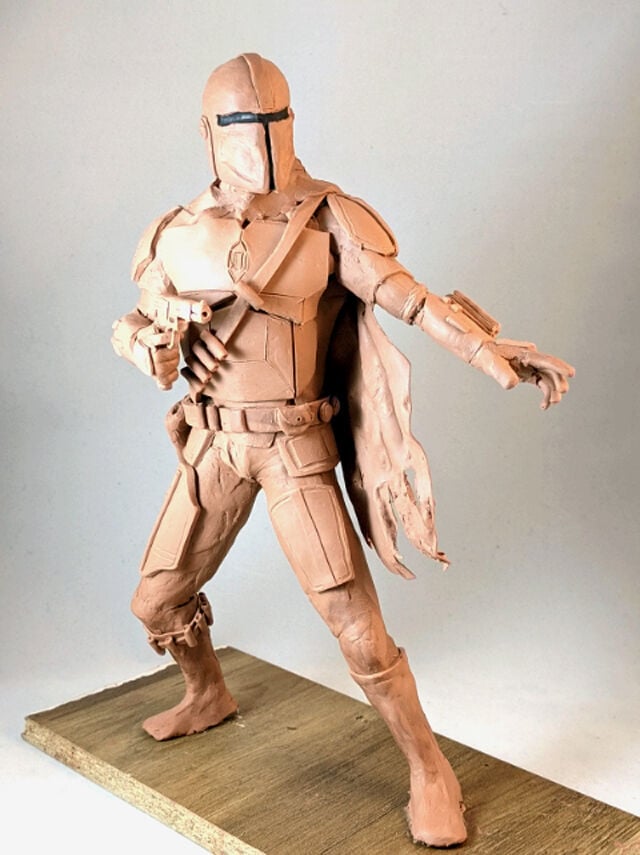 The “Mandalorian” sculpture by Community Board 11 District Manager Joseph Marziliano is included in the Winter Art Show. 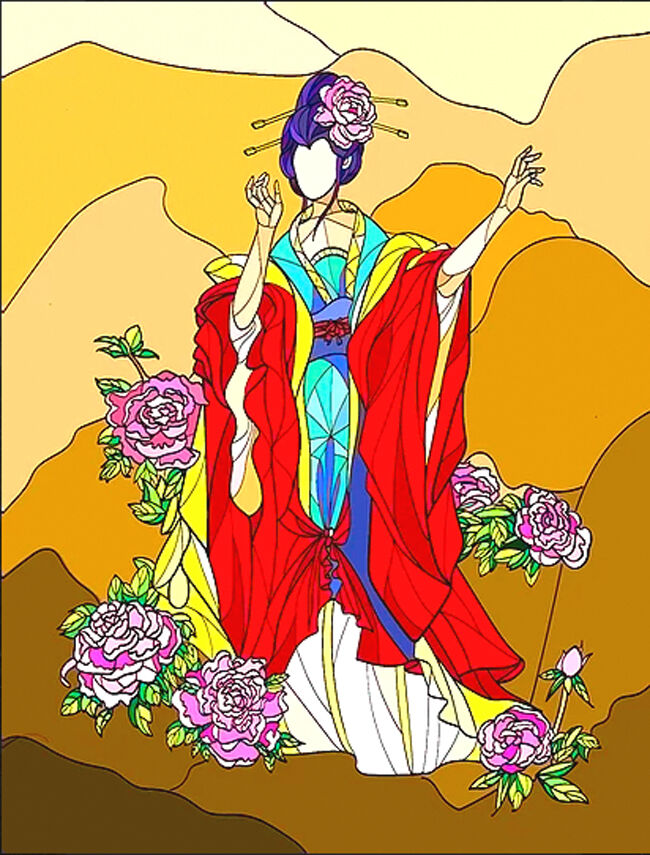 The gallery includes various forms of artwork from 61 Queens artists

The “Mandalorian” sculpture by Community Board 11 District Manager Joseph Marziliano is included in the Winter Art Show.

To immerse yourself in this year’s Winter Art Show, all you need to do is turn up your computer screen’s brightness and turn on the speakers — the Bayside Historical Society has moved its annual exhibit from its Fort Totten Castle into your living room.

Rather than canceling its annual art show on its 20th anniversary, the museum transformed the experience into a virtual one after considering how important it is to both artists and art appreciators alike. All 61 pieces are on display and free to view on the BHS website, set to the sound of thought-provoking jazz. Many of the works of art are products of the pandemic itself.

“Our thoughts were, ‘People have been in lockdown and I bet artists are using that time to be creative,’ and we were right,” said Laura James, the BHS’s executive director. “They told us how active they were and how frustrated they were to not have the place to exhibit what they had done.”

The show features an array of artworks, including paintings, digital illustrations, sculptures and photographs.

There is no theme for the exhibit, except that every artist has a connection to Queens — each lives, works or studies in the borough. Familiar names litter the virtual gallery, such as award-winning photographer Willy Airaldi and Community Board 11 District Manager and sculptor Joseph Marziliano. A subsection of the exhibit is dedicated to Bayside High School art students as part of an ongoing partnership between BHS and the school. The young artists’ works make up about one-third of the entire art show.

Many of the pieces are available for purchase, while others are for display only. Those interested in buying the artwork must conduct the exchange with the artist directly, but the BHS is asking that 15 percent of the purchase be donated to the society so that it can continue to offer educational programming through the pandemic.

The historical society is forgoing awards and prizes this year. James said it wouldn’t be fair to artists to rate their work based on photographs of the pieces rather than the physical objects themselves — the brush strokes of a painting may look different in-person than through a computer screen. The BHS is having experts evaluate each piece and provide public observations, but will not rank them in any order.

“It’s loosely defined as judging,” James said. “No winners, we won’t award prizes, but there will be plenty of commentary.”

The professional observations are ongoing and expected to be uploaded to the BHS’s site in late February.

According to James, the gallery reported 2,700 web hits on its first day. The show typically welcomes just a few hundred visitors at its opening reception.

“We were astounded,” James said. “It reached a much wider audience.”

The tremendous support has BHS staff reconsidering the ways the show has been operating. In past years, the exhibit remained on view for the duration of February, but James said she and her colleagues are now playing with the idea of offering both in-person and virtual galleries moving forward. The artwork would remain on view for a month, but available online for several weeks beyond the closing date.

Some of the gallery visitors reached out to James to relay their appreciation for the BHS going to great lengths to make sure the Winter Art Show continued despite the hardships the pandemic posed. The beautiful artwork and showcased creativity of their Queens neighbors helped brighten many viewers’ days, according to James.

“Throughout a pandemic like this, we felt it was important to have continuity, for people to know we’re still here, we’re still active, fulfilling the mission we have,” James said.