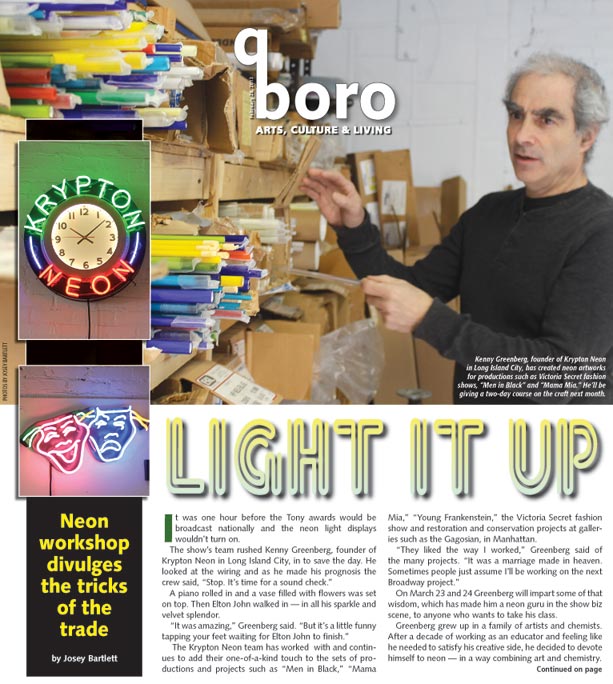 Kenny Greenberg, founder of Krypton Neon in Long Island City, has created neon artworks for productions such as Victoria Secret fashion shows, "Men in Black" and "Mama Mia."He'll be giving a two-day course on the craft next month. 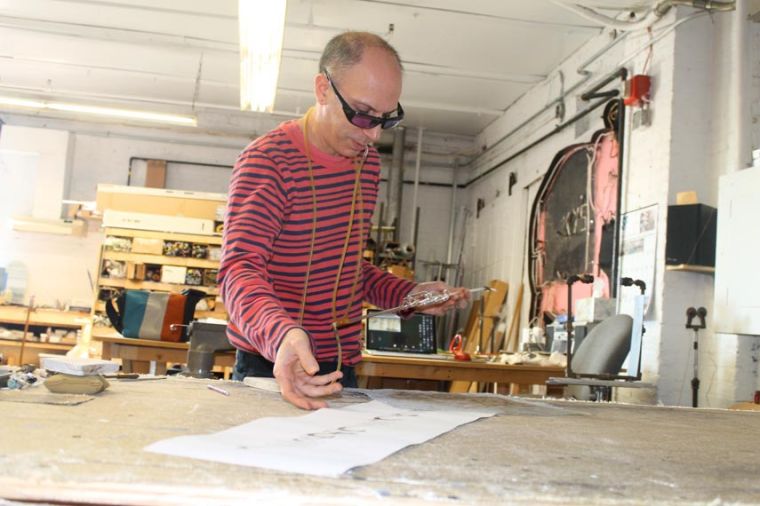 Kenny Greenberg, founder of Krypton Neon in Long Island City, has created neon artworks for productions such as Victoria Secret fashion shows, "Men in Black" and "Mama Mia."He'll be giving a two-day course on the craft next month.

It was one hour before the Tony awards would be broadcast nationally and the neon light displays wouldn’t turn on.

The show’s team rushed Kenny Greenberg, founder of Krypton Neon in Long Island City, in to save the day. He looked at the wiring and as he made his prognosis the crew said, “Stop. It’s time for a sound check.”

A piano rolled in and a vase filled with flowers was set on top. Then Elton John walked in — in all his sparkle and velvet splendor.

“It was amazing,” Greenberg said. “But it’s a little funny tapping your feet waiting for Elton John to finish.”

The Krypton Neon team has worked with and continues to add their one-of-a-kind touch to the sets of productions and projects such as “Men in Black,” “Mama Mia,” “Young Frankenstein,” the Victoria Secret fashion show and restoration and conservation projects at galleries such as the Gagosian, in Manhattan.

“They liked the way I worked,” Greenberg said of the many projects. “It was a marriage made in heaven. Sometimes people just assume I’ll be working on the next Broadway project.”

On March 23 and 24 Greenberg will impart some of that wisdom, which has made him a neon guru in the show biz scene, to anyone who wants to take his class.

Greenberg grew up in a family of artists and chemists. After a decade of working as an educator and feeling like he needed to satisfy his creative side, he decided to devote himself to neon — in a way combining art and chemistry.

It’s a two-day, eight-person workshop. Greenberg starts with a basic lecture on glass blowing and steps his students through some of the cutting, welding and bending basics. Then the students take the reins — with Greenberg always lending a supportive and helpful hand and eye.

Before the class begins proteges submit sketches of what they want to create. Some leap into fairly intricate stuff such as a coffee cup with steam or a word, which has more intricate bends than the non-neon pro would think.

But learning what’s difficult and what’s manageable is a reason on its own to take the course, Greenberg said. Even if students don’t plan to take their neon skills to a professional level, it’s a valuable skill for a designer who may eventually work with a neon artist.

“I think that’s a great thing to do,” Greenberg said. “Often I spend time training people how to design sets for neon installation.”

Other sketches are simple butterflies or abstract experiments. Often students change their mind for what do with their projects the night between the two classes, Greenberg said.

Some people want to work on techniques and creating a perfect product; others want to plunge in and keep working on his or her little masterpiece.

He compares it to learning to play the piano.

“You can play scales all day or just bang away at it,” he said. “They explore and discover what works for them.”

Lastly, in the class, Greenberg makes the glass designs glow.

Most neon shops have only two gases and about 12 colors, Greenberg said, but because of Krypton’s show biz clientele it has at least a hundred different shades. Some colors are made by tinting the glass and others by mixing chemicals

Most shops use just neon and argon, “but because we are crazy we have helium, krypton [of course] and xenon too.”