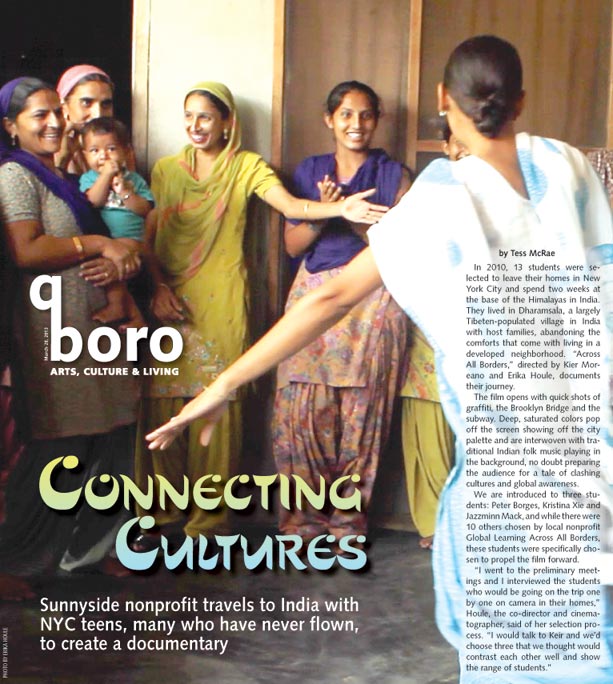 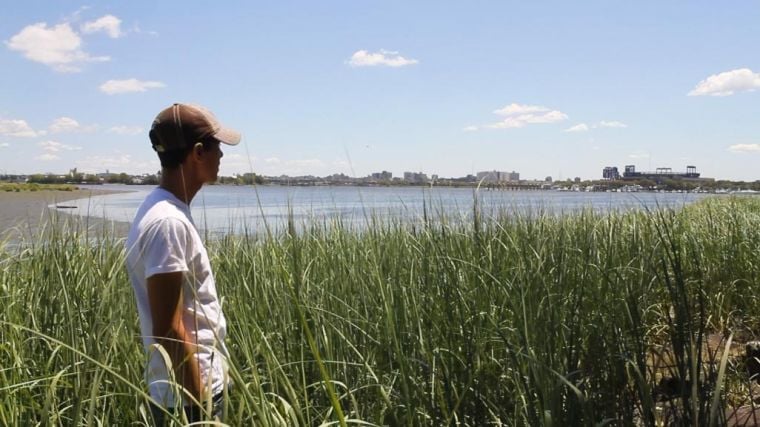 Joelvy Nunez, a Queens resident, in a still from the documentary “Across All Borders.”

Joelvy Nunez, a Queens resident, in a still from the documentary “Across All Borders.”

In 2010, 13 students were selected to leave their homes in New York City and spend two weeks at the base of the Himalayas in India. They lived in Dharamsala, a largely Tibeten-populated village in India with host families, abandoning the comforts that come with living in a developed neighborhood. “Across All Borders,” directed by Keir Moreano and Erika Houle, documents their journey.

The film opens with quick shots of graffiti, the Brooklyn Bridge and the subway. Deep, saturated colors pop off the screen showing off the city palette and are interwoven with traditional Indian folk music playing in the background, no doubt preparing the audience for a tale of clashing cultures and global awareness.

We are introduced to three students: Peter Borges, Kristina Xie and Jazzminn Mack, and while there were 10 others chosen by local nonprofit Global Learning Across All Borders, these students were specifically chosen to propel the film forward.

“I went to the preliminary meetings and I interviewed the students who would be going on the trip one by one on camera in their homes,” Houle, the co-director and cinematographer, said of her selection process. “I would talk to Keir and we’d choose three that we thought would contrast each other well and show the range of students.”

These three students are heavily, if not exclusively, featured, allowing for a tight overarching story. Joelvy Nunez, who is from Queens, went on the journey as well.

Houle and Moreano create a lighthearted, and optimistic piece, with a familiar storyline in the vein of “Mad Hot Ballroom” and other films that introduce inner-city youth to cultures they otherwise would never be exposed to. Nevertheless, the film is quite satisfying.

Of course, there were kinks. The loud colors highlighted in New York City weren’t as prominent in the India footage and portions of the audio could’ve been cleaned up a bit. But with a tight budget consisting mostly of Kickstarter campaign donations, the documentarians do well with that they have.

One of the most beautiful moments involved a dance party of sorts where the teenagers and a few natives showed off their moves.

The dance moves from both cultures were surprisingly similar and showed the message clearer than any other scene in the 20-minute film. Moments like these, which demonstrate how similar teenagers can be regardless of nationality, gave the film some weight and would’ve proven useful if used more often.

With time constraints taken into consideration, Houle and Moreano put together a solid documentary. Filming in India, especially in an isolated village filled mostly with Tibetan monks, can prove difficult when trying to put a film together. Houle even recalls finding a suitable electrical outlet to be a challenge.

“There’s problems with power in the area so charging batteries was a problem,” Houle, who carried equipment and filmed all of the footage on her own, said. “The first night we were there, I plugged in a power strip and after a few minutes it sparked and we had a miniature electrical fire. There were certain small dangers like that that would happen from time to time.”

Danger or not, Houle said the Buddist community was kind and accepting and didn’t take notice of the camera she toted around everyday.

Houle filmed much of the piece on a small Canon camera that sits comfortably in one hand.

“Using a small camera helped in putting everyone at ease,” Houle said of her camera choice. “You know, nowadays, kids are using cameras all of the time. They’re always taking images and videos of themselves so standing in front of a camera is kind of natural for them all.”

Global LAB, based in Sunnyside, was founded in 2006 by John Eastman and Brad Choyt. Students are nominated by their school principals based on evidence of leadership and grades.

As Global LAB requires selected students to implement a leadership project in their school after returning from India, the program is only open to high school sophomores and juniors.

“Many private high schools in NYC and across the country are able to fund and staff Global Citizenship Initiatives to make sure their students leave high school with strong global awareness and experience,” Eastman said. “Yet most of our public schools, and certainly those struggling with budget cuts and the many other challenges of inner-city life, cannot offer their students anything comparable.

Eastman says that Global LAB hopes to balance that inequality.

“I think there are two main points we wanted to hit when we made this film,” Houle said. “Most obviously, it’s showing the positive effects of traveling with teenagers who don’t usually get to travel. Giving disadvantaged kids the opportunity to do something that, more often, advantaged kids get to do.”

The second point, Houle said, was to show students who typically come from lower-income families, be placed in a setting where the poverty level is lower than any city in the United States.

“Most of the kids walked away thinking that they do in fact have a lot compared to other countries,” Houle said. “Now they sort of appreciate what it is they do have.”

That juxtaposition was most prevalent when one student speaks about a small Indian boy who lived in the home of her host family. He was purchased as a servant to clean, cook and serve the family.

Eastman said many of the students who participate in the program follow similar paths.

The film will premiere online on April 2 and a private screening will be held at Rubin Museum of Himalayan Art. It will also be available on YouTube. More information is available at acrossallbordersfilm.com.