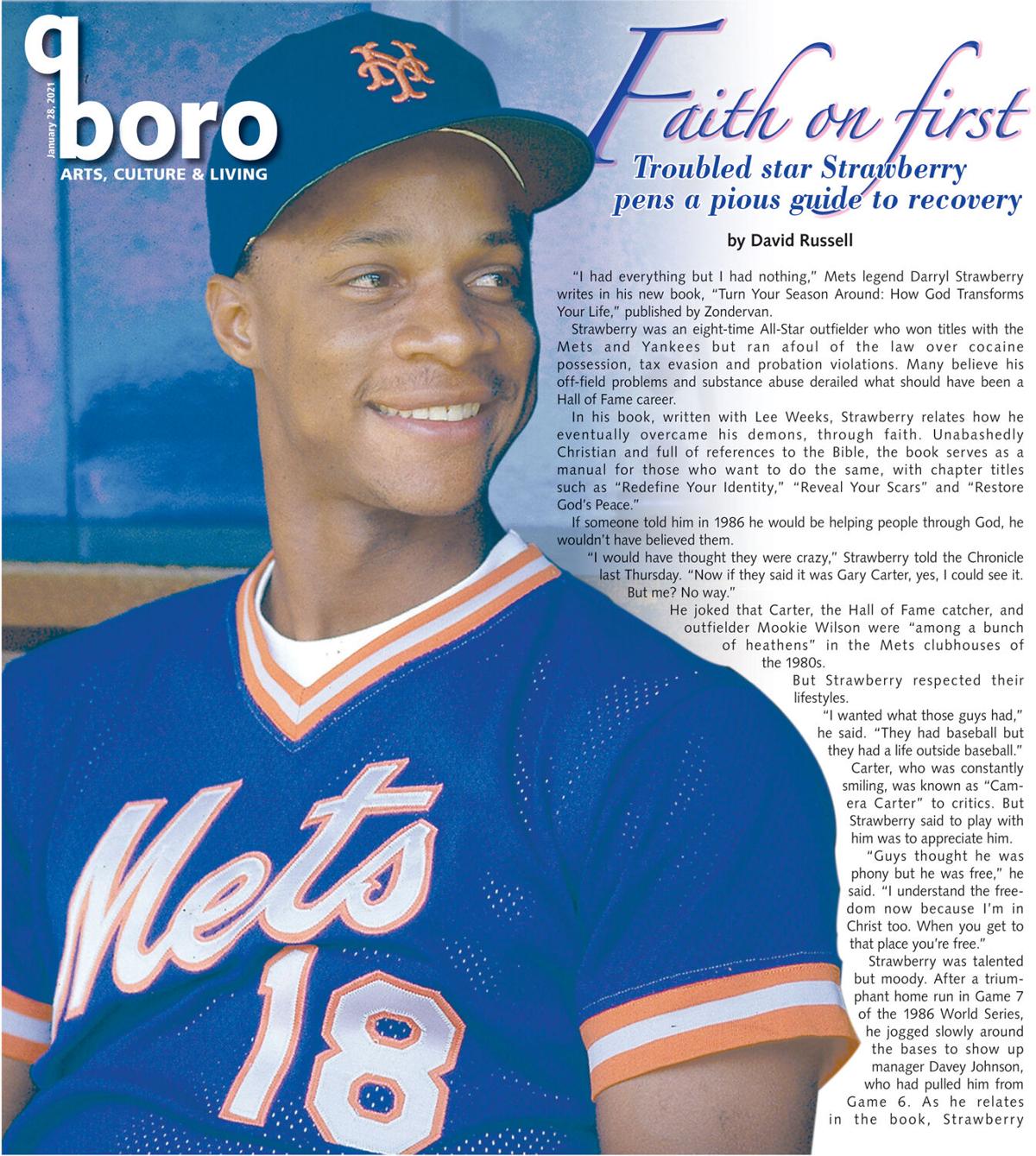 He was a star with the Mets but saw his life derailed before finding religion. 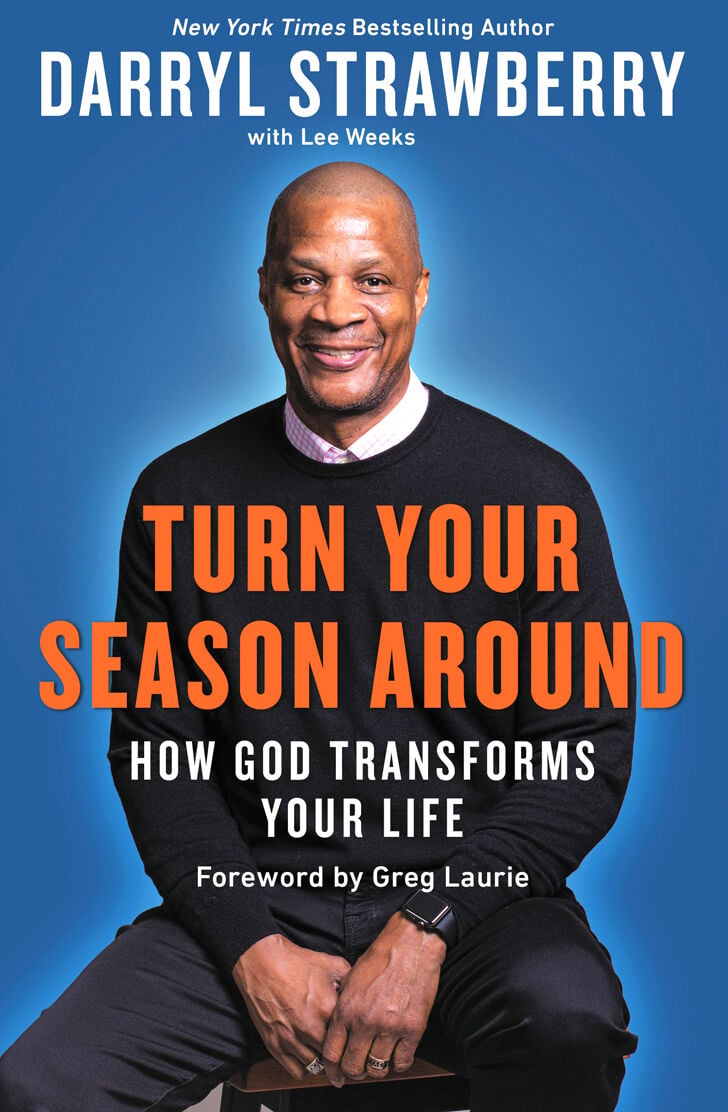 Darryl Strawberry takes readers through his religious awakening in his book.

He was a star with the Mets but saw his life derailed before finding religion.

Darryl Strawberry takes readers through his religious awakening in his book.

“I had everything but I had nothing,” Mets legend Darryl Strawberry writes in his new book, “Turn Your Season Around: How God Transforms Your Life,” published by Zondervan.

Strawberry was an eight-time All-Star outfielder who won titles with the Mets and Yankees but ran afoul of the law over cocaine possession, tax evasion and probation violations. Many believe his off-field problems and substance abuse derailed what should have been a Hall of Fame career.

In his book, written with Lee Weeks, Strawberry relates how he eventually overcame his demons, through faith. Unabashedly Christian and full of references to the Bible, the book serves as a manual for those who want to do the same, with chapter titles such as “Redefine Your Identity,” “Reveal Your Scars” and “Restore God’s Peace.”

If someone told him in 1986 he would be helping people through God, he wouldn’t have believed them.

“I would have thought they were crazy,” Strawberry told the Chronicle last Thursday. “Now if they said it was Gary Carter, yes, I could see it. But me? No way.”

He joked that Carter, the Hall of Fame catcher, and outfielder Mookie Wilson were “among a bunch of heathens” in the Mets clubhouses of the 1980s.

But Strawberry respected their lifestyles.

“I wanted what those guys had,” he said. “They had baseball but they had a life outside baseball.”

Carter, who was constantly smiling, was known as “Camera Carter” to critics. But Strawberry said to play with him was to appreciate him.

“Guys thought he was phony but he was free,” he said. “I understand the freedom now because I’m in Christ too. When you get to that place you’re free.”

Strawberry was talented but moody. After a triumphant home run in Game 7 of the 1986 World Series, he jogged slowly around the bases to show up manager Davey Johnson, who had pulled him from Game 6.

As he relates in the book, Strawberry accepted Jesus Christ in 1991, while a member of the Dodgers, but said it wasn’t until 15 years later he truly allowed God to have authority over his life.

“I went right into playing baseball and I never went back into the church and the process of being discipled,” Strawberry said.

When his mother was dying, she asked him to pray for her. She told him God spoke to her and told her “he’s going to get it out of you.” “I knew my mother wasn’t a liar,” Strawberry said.

He played his last game in 1999. A drug suspension and subsequent retirement came in 2000.

“It was great to get away from the lifestyle,” Strawberry said. “I couldn’t identify myself as who I was supposed to be because I was always Darryl Strawberry, the baseball player.”

He met Tracy, who would become his third wife, at a Narcotics Anonymous convention, though the famous athlete was hardly anonymous. Strawberry took photos with fans but she wasn’t impressed.

“She thought I was just a freak show,” Strawberry said.

They started talking about how to help him instead of his baseball career.

“She walked through the hardest parts of my life with me when I didn’t have nothing, when the trophies were gone, the championships are over, the uniform is off and the money’s gone,” Strawberry said.

The hardest parts included Tracy pulling him out of dope houses in Florida. Strawberry asked why she and God wouldn’t just leave him there to die.

Her reply: “You’re not that lucky.”

Speaking of his mother and wife, Strawberry, a self-described womanizer in his playing days, noted God put two women in his life who would “bring correction.”

Of Tracy, he said, “I’m the man I am today because of her. There’s nothing great about me. I just had help.”

Strawberry draws some parallels between baseball and life in his book. Instead of standing at the plate and looking at his third base coach for signs, now he asks, What would Jesus do?

Not dwelling on past mistakes is another.

He quotes the apostle Paul “forgetting what lies behind and straining forward to what lies ahead, I press on toward the goal for the prize of the upward call of God in Jesus Christ.”

Strawberry said he was able not to dwell on past mistakes in the 1986 playoffs as he struck out 12 times in 22 at-bats against the Astros but still delivered a pair of clutch home runs and crucial hits in a hard-fought series.