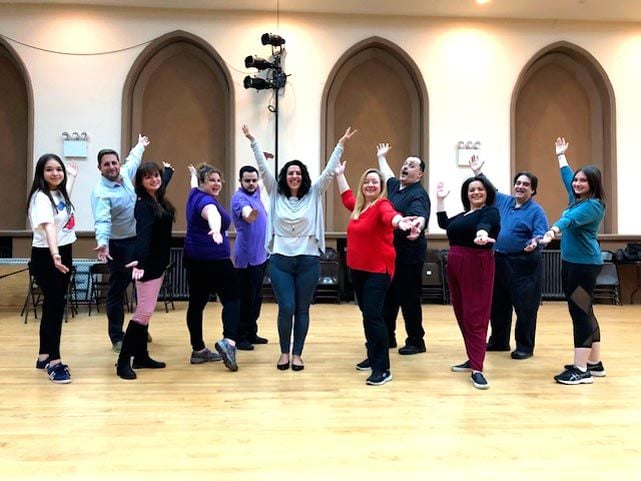 Don’t y’all be a bit surprised now if, with the arrival of the spring community theater season, y’all develop a sudden urge to water the camellias and sip a mint julep.

In an unusual turn of events, fully half of the six upcoming productions — including an almost equal number of musicals, dramas and comedies — are set in the South. And while some of the titles might be familiar, there is a fair share of lesser-known works on tap, as well.

This weekend sees the arrival of an interesting double feature, promoted as “two spine-tingling mysteries,” courtesy of the Parkside Players in Forest Hills.

Tennessee Williams’ little-known “Something Unspoken,” a two-character piece written in 1958 and set in Louisiana, centers on Miss Cornelia Scott (to be played by Elizabeth Zimmermann), a lonely, insecure southern woman, a Williams specialty, and her complex relationship with her secretary, Grace (Farah Diaz-Tello).

It is coupled with “The Spiral Staircase,” from the pen of F. Andrew Leslie. That show concerns a series of apparently unprovoked murders that have shocked a terrified village. The cast features Rosemary Innes, Amy Rubinson, Gordon Innes, Will Frenzel and Brett Hunter.

Both pieces are directed by Eugene Sullivan.

Continuing the Southern trend, Alfred Uhry’s much-lauded Pulitzer Prize-winning drama, “Driving Miss Daisy,” pulls up at Douglaston Community Theatre at the end of the month for a limited five-performance run.

The play, which was adapted into an Academy Award-winning motion picture, focuses on the 25-year relationship between an elderly Southern Jewish woman (the play’s title character, to be played by Barbara Mavro) and her African-American chauffeur, Hoke (Denzel Hawker). Inspired by Uhry’s real-life grandmother and her relationship with her own driver, the play includes a third character, Daisy’s son, Boolie, to be played by Dan Bubbeo.

The production is under the direction of Vincent Scott.

The following weekend sees the arrival of “Steel Magnolias,” which depicts the bonds that form among a group of — yes — Southern women who gather at an in-home beauty parlor, known as Truvy’s Beauty Spot. Another largely autobiographical piece, this comedy-drama, based on playwright Robert Harling’s experience with his sister’s death, manages to find humor even in the most serious of situations.

Presented by Theatre By The Bay NY, the production is under the direction of Patty Valenti, with an ensemble cast that includes Rosemary Kurtz, Nili Resnick, Elizabeth Zimmermann, Carol Giorgio, Samantha Kalinsky and Annette Daiell.

Three musical diversions make up the latter half of the season, beginning with “The Envelope, Please,” billed as a revue of Academy Award-winning songs (plus a few that should have won), from Maggie’s Little Theater.

Direction is by Alan Perkins, with Frank Auriemma serving as musical director. The show promises to be filled with dance, with no fewer than four choreographers providing the steps: Lindsay Levy, Gabriella Marchese, Amanda Montoni and Jonathan Mora.

What is described as a “unique version” of “Babes In Toyland” will be the spring attraction from The Gingerbread Players in Forest Hills, beginning April 25.

Based on the 1903 fairy tale-inspired operetta, with music by Victor Herbert, the show will be directed by Louise Guinther, who said, “The plot is our own, different from any of the movie versions or the Broadway original.”

Guinther also provided the new book and some original lyrics. Musical direction is by Lulu Chen, with musical arrangements being handled by Bill Ryden. Choreography is by Victoria Russo.

Among the beloved children’s characters portrayed in the show are Little Bo-Peep, to be played by Jillian Smith, and Tom-Tom, brought to life by Ronan Finley. Other cast members include Jim Chamberlain as the villainous Barnaby, David Friedman as the mysterious Toymaker and Andrew Dinan and Nick Cuttonaro as Barnaby’s henchmen.

As of press time, auditions were underway for the Andrean Players’ production of “Bye Bye Birdie,” set to open on May 14.

Under the direction of Andrew J. Koslosky, this classic musical, about an Elvis Presley-like rock star who has been drafted, much to the consternation of his fawning female fans, will feature musical direction by Patrick White and choreography by Richard Masin and Alyssa Pitaluga. Peter Carrozzo serves as assistant director.