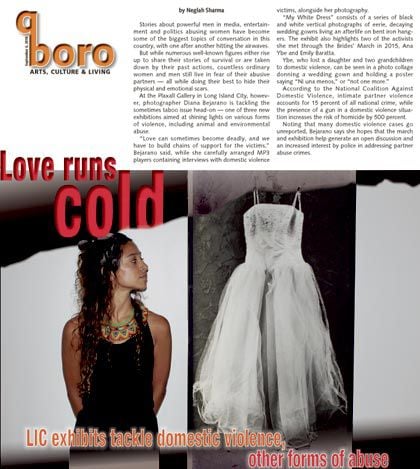 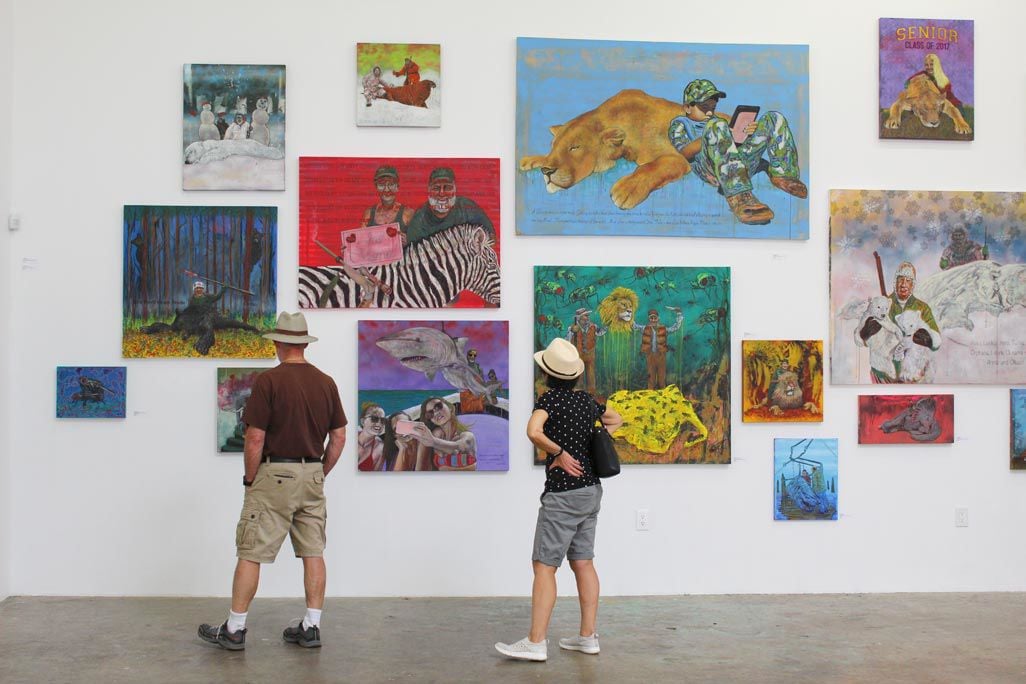 Plaxall Gallery visitors check out Craig Norton’s exhibit tackling animal abuse. On the cover: photographer Diana Bejarano and one of her white dresses, one of many in her exhibit on the horrors of domestic violence.

Plaxall Gallery visitors check out Craig Norton’s exhibit tackling animal abuse. On the cover: photographer Diana Bejarano and one of her white dresses, one of many in her exhibit on the horrors of domestic violence.

Stories about powerful men in media, entertainment and politics abusing women have become some of the biggest topics of conversation in this country, with one after another hitting the airwaves.

But while numerous well-known figures either rise up to share their stories of survival or are taken down by their past actions, countless ordinary women and men still live in fear of their abusive partners — all while doing their best to hide their physical and emotional scars.

At the Plaxall Gallery in Long Island City, however, photographer Diana Bejarano is tackling the sometimes taboo issue head-on — one of three new exhibitions aimed at shining lights on various forms of violence, including animal and environmental abuse.

“Love can sometimes become deadly, and we have to build chains of support for the victims,” Bejarano said, while she carefully arranged MP3 players containing interviews with domestic violence victims, alongside her photography.

“My White Dress” consists of a series of black and white vertical photographs of eerie, decaying wedding gowns living an afterlife on bent iron hangers. The exhibit also highlights two of the activists she met through the Brides’ March in 2015, Ana Ybe and Emily Baratta.

Ybe, who lost a daughter and two grandchildren to domestic violence, can be seen in a photo collage donning a wedding gown and holding a poster saying “Ni una menos,” or “not one more.”

According to the National Coalition Against Domestic Violence, intimate partner violence accounts for 15 percent of all national crime, while the presence of a gun in a domestic violence situation increases the risk of homicide by 500 percent.

Noting that many domestic violence cases go unreported, Bejarano says she hopes that the march and exhibition help generate an open discussion and an increased interest by police in addressing partner abuse crimes.

“The point is unity in women and men to work towards a healthier society in which we can talk about this because this is where the victim gets shamed and feels isolated,” Bejarano said. “I thought the Women’s March was a very powerful and poetic way of talking about [domestic violence].”

The Brides’ March was established in New York City in 2001 in memory of Gladys Ricart, who was murdered on Sept. 26, 1999 by her abusive ex-boyfriend on her wedding day — the procession takes place in Manhattan every year on the anniversary of her death.

A different kind of march was held last week, as people gathered to commemorate the Animal Rights March in Manhattan on Sept. 1.

So it’s perhaps no coincidence that at the Plaxall Gallery this month, adult coloring book artist Craig Norton is giving a sneak peek to his 70-piece exhibition “Unnatural Selection,” highlighting humanity’s assault on members of the animal kingdom.

“They talk about how they respect the animals that they’re killing, by how a carcass is donated to an African village, when the hunter who spent $60,000 getting a permit to hunt that elephant could have just donated that money to the village, instead,” Norton said.

He also explained that some art galleries didn’t want to showcase his animal advocacy exhibition, “possibly from the perspective of the trophy hunting angle,” and how the Trump administration is attempting to rebrand trophy hunting as a “good thing.”

Cristian Pietrapiana, the coordinator for “Fever,” the third, separate exhibition at the Plaxall Gallery, features artists’ takes on climate change that challenge and bring awareness to the issue.

“These three exhibitions deal with pertinent themes that are important to the Exhibition Committee at [Long Island City Artists] because we are all affected by these timely issues and want to support artists and curators in bringing their messages across to the public,” museum director Norma Homberg said.