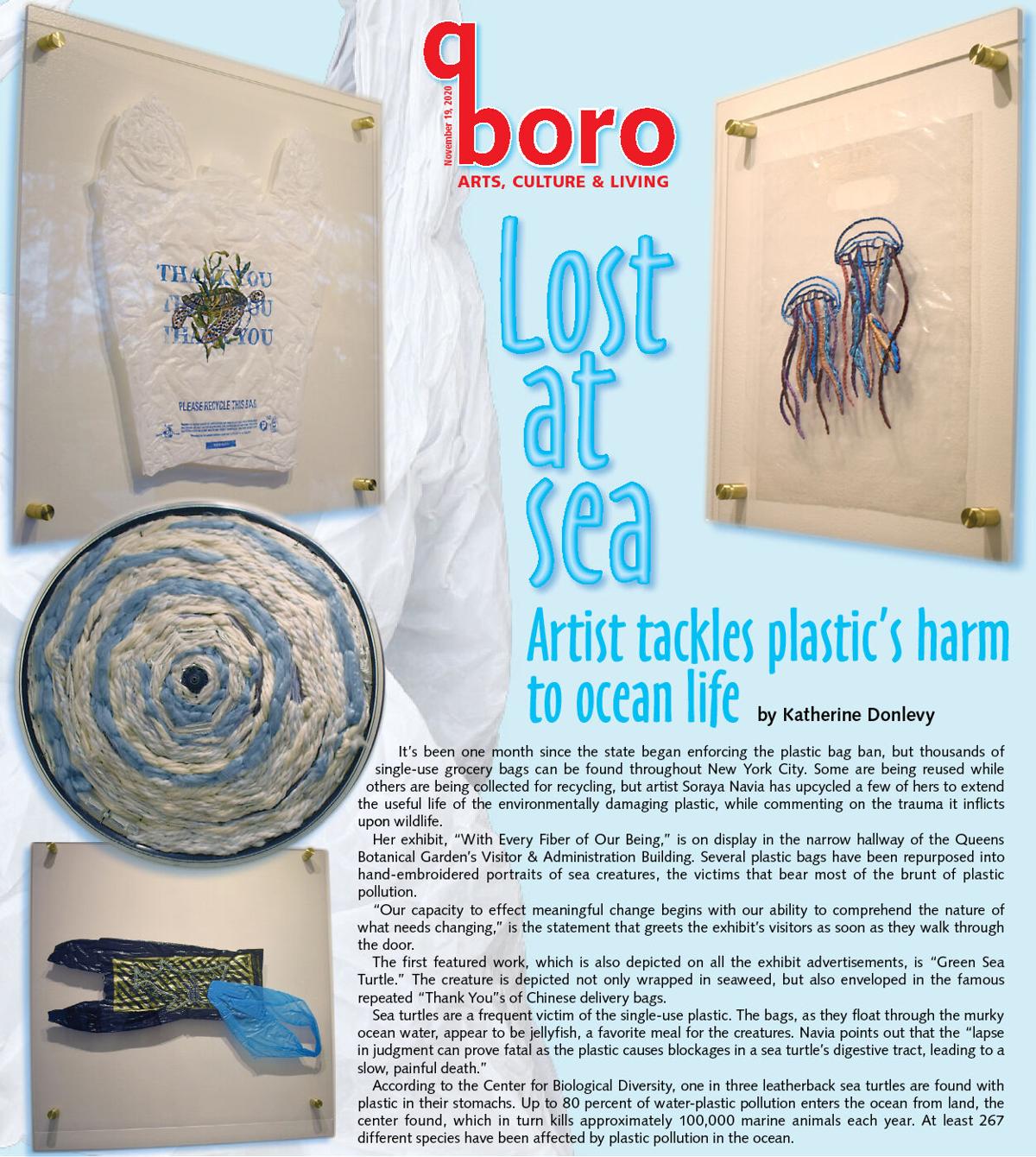 On the cover: “Green Sea Turtle,” “Mauve Stingers” and other works by Soraya Navia at the QBG. 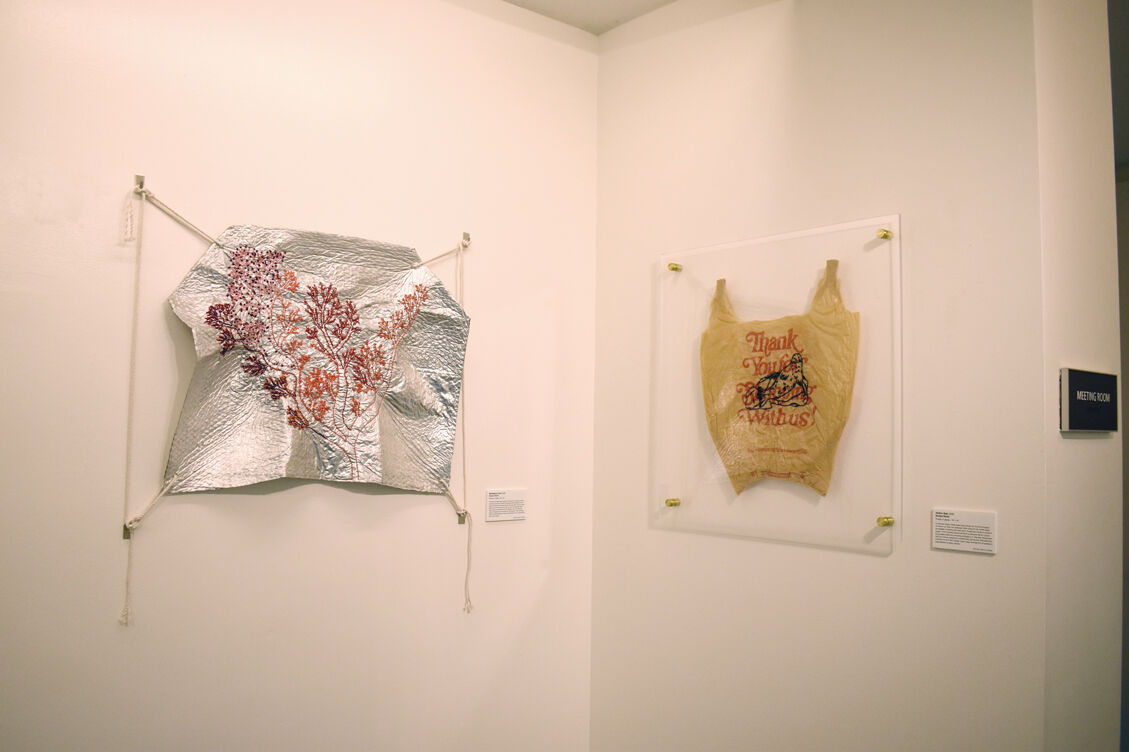 “Bubblegum Coral,” left, and “Harbor Seal” both feature embroidered marine life on plastic, though the canvases appear in different forms.

On the cover: “Green Sea Turtle,” “Mauve Stingers” and other works by Soraya Navia at the QBG.

“Bubblegum Coral,” left, and “Harbor Seal” both feature embroidered marine life on plastic, though the canvases appear in different forms.

It’s been one month since the state began enforcing the plastic bag ban, but thousands of single-use grocery bags can be found throughout New York City. Some are being reused while others are being collected for recycling, but artist Soraya Navia has upcycled a few of hers to extend the useful life of the environmentally damaging plastic, while commenting on the trauma it inflicts upon wildlife.

Her exhibit, “With Every Fiber of Our Being,” is on display in the narrow hallway of the Queens Botanical Garden’s Visitor & Administration Building. Several plastic bags have been repurposed into hand-embroidered portraits of sea creatures, the victims that bear most of the brunt of plastic pollution.

“Our capacity to effect meaningful change begins with our ability to comprehend the nature of what needs changing,” is the statement that greets the exhibit’s visitors as soon as they walk through the door.

The first featured work, which is also depicted on all the exhibit advertisements, is “Green Sea Turtle.” The creature is depicted not only wrapped in seaweed, but also enveloped in the famous repeated “Thank You”s of Chinese delivery bags.

Sea turtles are a frequent victim of the single-use plastic. The bags, as they float through the murky ocean water, appear to be jellyfish, a favorite meal for the creatures. Navia points out that the “lapse in judgment can prove fatal as the plastic causes blockages in a sea turtle’s digestive tract, leading to a slow, painful death.”

According to the Center for Biological Diversity, one in three leatherback sea turtles are found with plastic in their stomachs. Up to 80 percent of water-plastic pollution enters the ocean from land, the center found, which in turn kills approximately 100,000 marine animals each year. At least 267 different species have been affected by plastic pollution in the ocean.

“With Every Fiber of Our Being” reflects on the pollution from the perspective of the victims of widespread plastic consumption and discard. By embroidering thousands of vibrant, textured stitches, Navia transforms the pollutant into a canvas to capture the resiliency of the wildlife as they fight for survival.

Some artwork features the environment the animals live in as well, such as “Bubblegum Coral,” created on a large silver-colored piece of plastic. Another piece, “Blue Currents,” stands out from the rest — yarn wrapped around a bicycle wheel depicts the blue, white and gray choppy and cyclical waters of the ocean.

“What emerges is a poignant collection of images that tell the story of an ecosystem challenged, but not beaten, by the weight of what we discard,” Navia, who lives in Sunnyside, said in her artist statement. “There are more microplastics in our ocean than stars in our galaxy, but no matter how dire, when there are people willing to better understand and viscerally experience situations not their own, there is boundless potential for increased sustainability and lasting conservation.”

Navia’s hope for her exhibition, she said, is that it will inspire others to upcycle plastic goods and to take actions toward environmental conservation.

“With Every Fiber of Our Being” is part of the Queens Botanical Garden’s Art in the Garden series, which showcases local artists. It will remain on view in the Visitor & Administration Building Tuesdays through Sundays during regular operation hours until Dec. 27.

A virtual tour led by Navia is also available as of Nov. 16 — the embroiderer takes the viewer on an in-depth journey into her artistic process and talks about each piece included in the exhibit.

For more information on “With Every Fiber of Our Being” and artist Navia, visit queensbotanicalgarden.org/ artinthegarden/sorayanavia.