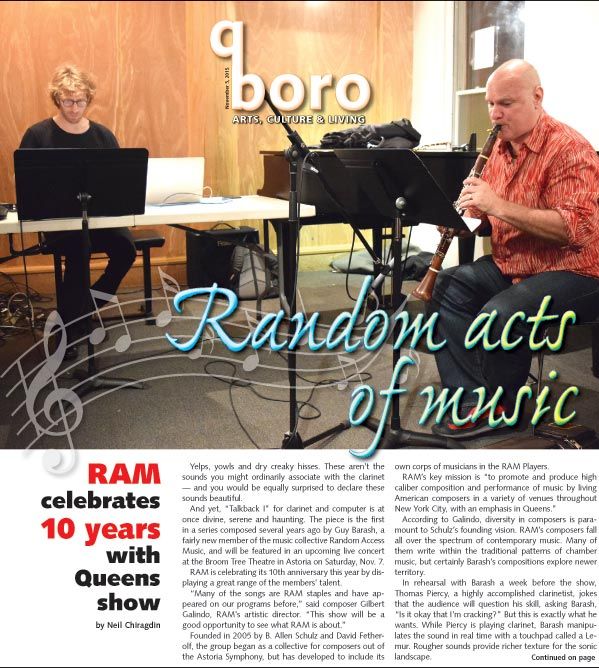 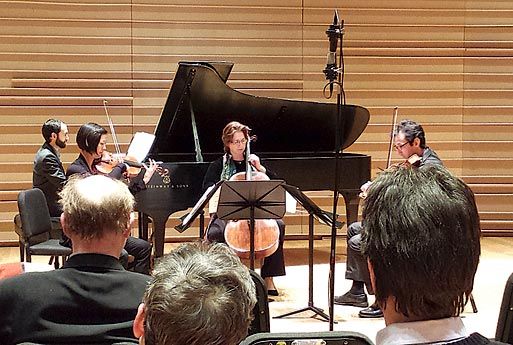 Amir Khosrowpour, left, on piano, Karen Kim on violin, Kate Dillingham on cello and Robert Meyer on viola perform at Random Access Music’s “Perceptions of Beauty” in March 2015. On the cover: Clarinetist Thomas Piercy practices during a rehearsal with composer Guy Barash.

Amir Khosrowpour, left, on piano, Karen Kim on violin, Kate Dillingham on cello and Robert Meyer on viola perform at Random Access Music’s “Perceptions of Beauty” in March 2015. On the cover: Clarinetist Thomas Piercy practices during a rehearsal with composer Guy Barash.

Yelps, yowls and dry creaky hisses. These aren’t the sounds you might ordinarily associate with the clarinet — and you would be equally surprised to declare these sounds beautiful.

And yet, “Talkback I” for clarinet and computer is at once divine, serene and haunting. The piece is the first in a series composed several years ago by Guy Barash, a fairly new member of the music collective Random Access Music, and will be featured in an upcoming live concert at the Broom Tree Theatre in Astoria on Saturday, Nov. 7.

RAM is celebrating its 10th anniversary this year by displaying a great range of the members’ talent.

“Many of the pieces are RAM staples and have appeared on our programs before,” said composer Gilbert Galindo, RAM’s artistic director. “This show will be a good opportunity to see what RAM is about.”

Founded in 2005 by B. Allen Schulz and David Fetherolf, the group began as a collective for composers out of the Astoria Symphony, but has developed to include its own corps of musicians in the RAM Players.

RAM’s key mission is “to promote and produce high caliber composition and performance of music by living American composers in a variety of venues throughout New York City, with an emphasis in Queens.”

According to Galindo, diversity in composers is paramount to Schulz’s founding vision. RAM’s composers fall all over the spectrum of contemporary music. Many of them write within the traditional patterns of chamber music, but certainly Barash’s compositions explore newer territory.

In rehearsal with Barash a week before the show, Thomas Piercy, a highly accomplished clarinetist, jokes that the audience will question his skill, asking Barash, “Is it okay that I’m cracking?” But this is exactly what he wants. While Piercy is playing clarinet, Barash manipulates the sound in real time with a touchpad called a Lemur. Rougher sounds provide richer texture for the sonic landscape.

What comes out of the speakers are tones familiar and alien, and which explore the full range of what a clarinet can do. “The structure in some of the measures contrast with freer gestures,” says Barash. In this way, the piece is like a conversation: a game of telephone in which the message may change because of the way it is expressed.

In a separate re- hearsal that week, another conversation takes place.

RAM Players members Laura Falzon, a flautist, and Kate Dillingham, a cellist, are practicing “Dviraag” by Asha Srinivasan, a composer outside of RAM. The piece is especially challenging for its rapid melodic changes, which at times will differ between the instruments, until they catch up to each other and play together.

Even for such experienced musicians, finding synchronicity in their pacing needs to be a constant focus, especially since this song’s beauty lies within its overlay of separate but similar: the word dviraag translates to “two melodies.” Dillingham said, “The syntax — the notes that are emphasized — keep changing.”

Falzon agreed, “It sounds simple, but it’s not. The result, though, is lovely.”

Falzon played this piece in May at the 4th Annual Queens New Music Festival, which is a program run by RAM.

The festival began at the Secret Theatre in Long Island City in 2012, though since 2014 it has begun with a kickoff concert at the Church-in-the-Gardens in Forest Hills, performed in conjunction with the Musica Reginae concert series. Galindo remembers a couple who stumbled upon this year’s festival, which runs concurrently with the Long Island City Arts Open and benefits from its increased foot traffic.

“They decided to attend because they had never heard a harpist perform,” Galindo said. “They sat in and enjoyed it. These are the unknown new music fans out there who we try to reach.”