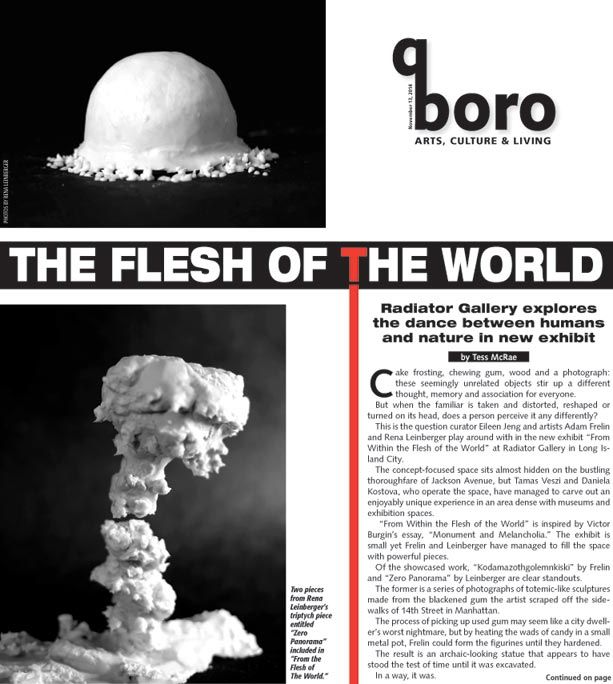 Two pieces from Rena Leinberger's triptych piece entitled “Zero Panorama” included in “From the Flesh of The World.” 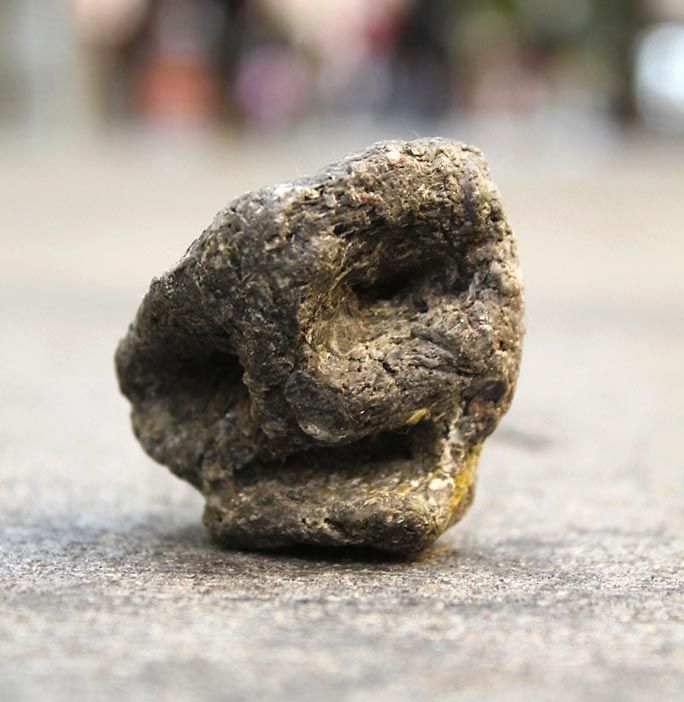 A totem by Adam Frelin in his series “Kodamazothgolemnkiski” is featured at Radiator Gallery in Long Island City.

Two pieces from Rena Leinberger's triptych piece entitled “Zero Panorama” included in “From the Flesh of The World.”

A totem by Adam Frelin in his series “Kodamazothgolemnkiski” is featured at Radiator Gallery in Long Island City.

Cake frosting, chewing gum, wood and a photograph: these seemingly unrelated objects stir up a different thought, memory and association for everyone.

But when the familiar is taken and distorted, reshaped or turned on its head, does a person perceive it any differently?

This is the question curator Eileen Jeng and artists Adam Frelin and Rena Leinberger play around with in the new exhibit “From Within the Flesh of the World” at Radiator Gallery in Long Island City.

The concept-focused space sits almost hidden on the bustling thoroughfare of Jackson Avenue, but Tamas Veszi and Daniela Kostova, who operate the space, have managed to carve out an enjoyably unique experience in an area dense with museums and exhibition spaces.

“From Within the Flesh of the World” is inspired by Victor Burgin’s essay, “Monument and Melancholia.” The exhibit is small yet Frelin and Leinberger have managed to fill the space with powerful pieces.

Of the showcased work, “Kodamazothgolemnkiski” by Frelin and “Zero Panorama” by Leinberger are clear standouts.

The former is a series of photographs of totemic-like sculptures made from the blackened gum the artist scraped off the sidewalks of 14th Street in Manhattan.

The process of picking up used gum may seem like a city dweller’s worst nightmare, but by heating the wads of candy in a small metal pot, Frelin could form the figurines until they hardened.

The result is an archaic-looking statue that appears to have stood the test of time until it was excavated.

“I liked the idea of something that we take from the earth, put into our bodies and eventually spit out on the earth again and taking it to create something new from it once more,” Frelin said.

While the figurines are no longer in the artist’s possession — he left them on the sidewalks of Manhattan — what was dispayed at Radiator were up-close images of each piece, replacing the sense of disgust with one of grandeur.

The artist said she was surfing the internet and found herself searching through images of famous explosions when she came across a photo from 1946 of a group of Army and Navy men and women posing in front of a cake in the shape of a mushroom cloud.

The dessert was made in celebration of the first successful atomic bomb test.

Leinberger drew inspiration from her discomfort in viewing the 1946 photograph and created sculptures of infamous explosions — the Trinity nuclear bomb detonation in 1945, the Challenger space shuttle explosion in 1986, the Deepwater Horizon explosion in 2010 and the bombing of Nagasaki in 1945 — out of cake frosting.

“These to me are disturbing because of their beauty,” Leinberger said of her photographs. “The spectacle of these is an actual distancing of the horror these events caused.”

The images, cast on a black background, look almost like deep sea creatures and give off an eerie sensation.

The juxtaposition of the frosting, often associated with celebration and joy and the events they represent, associated with death and horror, is an interesting one that pulls a viewer in.

The other pieces created by Leinberger and Frelin are moving as well.

Another piece worthy of mention is Frelin’s recreation of the once-famous firefall at Yosemite State Park where rangers would burn wood and leaves until they became embers before raking them over a cliff. The result is a waterfall made of fire.

The park no longer does the firefall, but Frelin was able to recreate the tradition in a New York quarry.