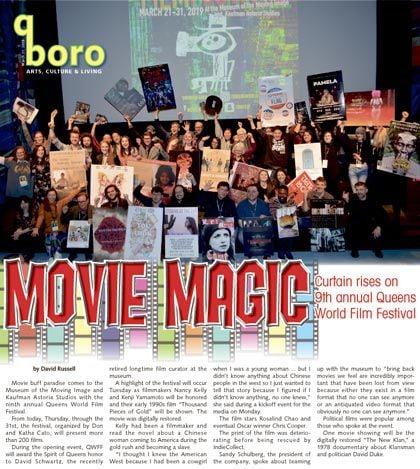 Filmmakers Leslie Shatz, left, Nancy Kelly and Heather Taylor will have their work shown at the Queens World Film Festival. On the cover: Filmmakers celebrate Monday at an event held to kick off the festival.

Filmmakers Leslie Shatz, left, Nancy Kelly and Heather Taylor will have their work shown at the Queens World Film Festival. On the cover: Filmmakers celebrate Monday at an event held to kick off the festival.

Movie buff paradise comes to the Museum of the Moving Image and Kaufman Astoria Studios with the ninth annual Queens World Film Festival.

From today, Thursday, through the 31st, the festival, organized by Don and Katha Cato, will present more than 200 films.

During the opening event, QWFF will award the Spirit of Queens honor to David Schwartz, the recently retired longtime film curator at the museum.

A highlight of the festival will occur Tuesday as filmmakers Nancy Kelly and Kenji Yamamoto will be honored and their early 1990s film “Thousand Pieces of Gold” will be shown. The movie was digitally restored.

Kelly had been a filmmaker and read the novel about a Chinese woman coming to America during the gold rush and becoming a slave.

The print of the film was deteriorating before being rescued by IndieCollect.

Political films were popular among those who spoke at the event.

One movie showing will be the digitally restored “The New Klan,” a 1978 documentary about Klansman and politician David Duke.

The movie, from Leslie Shatz and Eleanor Bingham, follows Duke as he pursues political office. Shatz, who would later receive an Academy Award nomination for his sound work on “The Mummy,” said the one comment he received from the Klan was that he used special lenses to make them look bad.

The film includes footage from a televised debate between Duke and the Rev. Jesse Jackson during which the latter says Duke can’t adjust to the changes in society.

Shatz didn’t think Duke would eventually become as well-known as he has.

“We thought we finished him off,” Shatz said. “When you see the end of the film, he just loses it. He’s disgraced. It shows some of the bizarre things he does.”

There is also the 2018 documentary feature “Capturing the Flag,” which explores a tightknit group of friends traveling to Cumberland County, NC, for the 2016 election. Filmmaker Anne De Mare describes it as a “buddy movie set on the battlefield of voter suppression.”

It’s about three friends who went from New York to North Carolina to do voter protection at the polls and were joined by a fourth volunteer once there.

Laverne Berry, a lawyer who was one of the friends featured, said she’s been stopped in the street a few times by people telling her they’ve taken their family to vote.

“Habaneros” is the story of an independent woman looking for romance in a misogynistic world. Director Sri Mirajkar said the idea came to him after he participated in the Women’s March in Washington in 2017.

“It’s actually a real-life situation,” Mirajkar said. “We face it every day.”

He said the character might be deprived of rights and gender equality but still has her principles.

“You still want to carry on your life but then, how do you do that in that environment?” he asks.

Heather Taylor’s film “Pay to Stay” is one for the internet age. A lesbian couple takes a mini vacation to repair their relationship, unaware the apartment they rented online may lead to their untimely end. Such is life in the era of Uber and Airbnb.

“We trust the internet,” Taylor said. “We’re like, ‘Yeah, no problem, I’ll stay at that stranger’s house. No problem. I’ll get in that stranger’s car. So I wanted to talk about that.”