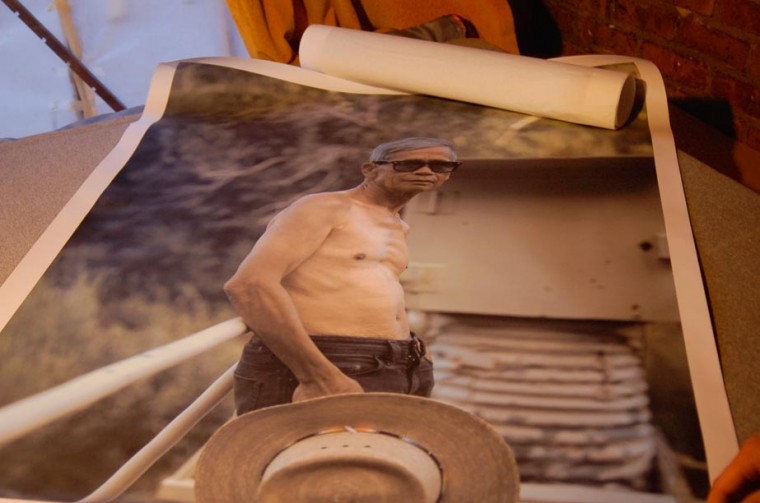 A photo by Phuc Le. 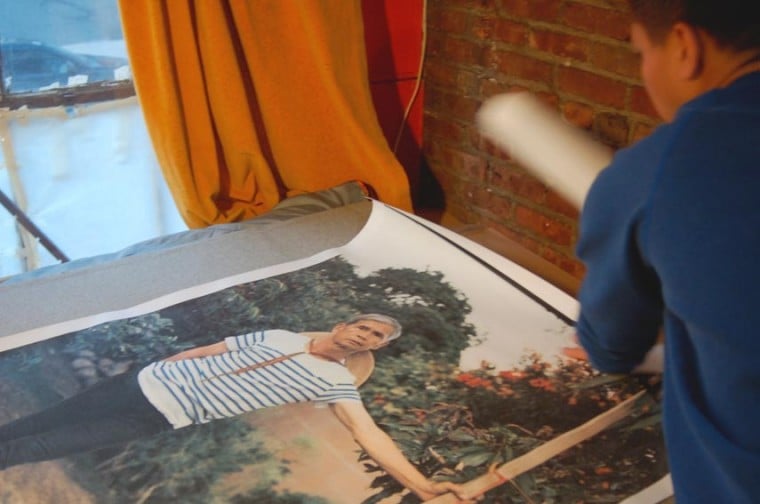 Phuc Le unrolls a photo of his father in his blue and white striped shirt.

A photo by Phuc Le.

Phuc Le unrolls a photo of his father in his blue and white striped shirt.

Le will be exhibiting selections from three distinct series in the show “Forced Entry” on Jan. 18 at the Flux Factory in Long Island City, where he is one of about a dozen artists in residence.

On Friday when I stopped by Le’s studio, he was wearing the electric blue sweatshirt his father sports in the series called “So Hip!” featuring his dad wearing Le’s favorite clothes.

“They are portraits of my dad, but also of myself,” he said pointing to a photo of his dad in a navy blue poncho. “I remember exactly where I was when I bought that poncho.”

Le, who was born in Vietnam, says he easily connects and becomes attached to inanimate objects. He keeps only a few pieces of clothing and wears them until they are full of holes. They help to comfort him when he floats from his adolescent home of Los Angeles to his adult home of New York City and everywhere in between.

“LA is my high school sweetheart, but New York is my grown-up love affair,” he said.

When Le began photographing his father in his LA oasis, complete with mango trees and a thriving herb garden, it served as a social commentary on the clothing made by American Apparel and the type of thrift-store-salvaged clothing Le and his friends loved — and how it became mainstream.

“But then I felt at one point I had out-grown it or was robbed of it,” he said. “Every part had been picked and sold.”

His works have stepped away from this angst and the viewer can see that. The simple portraits of his father show a man at ease with his environment — not smiling or frowning, just content.

Le said beyond a portrait of his father and of himself, the series is a mature way to rekindle a relationship with a father who had been absent for a good chunk of his younger years. Forcing his way into this relationship gave him one inspiration for the show’s name — “Forced Entry.”

“It’s a play on words,” Le said. “I feel like I have to fight to create, force myself into people’s bubbles, into a relationship with my dad, into the art world — whatever that means. I could go into some sappy stories, but I won’t. Also the gay community might see it for its sexual context.”

The second series speaks to forcing his way into a stranger’s life, if only for a few hours.

Le used the iPhone Grindr app, which uses the gadget’s GPS to locate other gay and bisexual individuals in the area, for the photo series “Grindr Test.”

Le acknowledges the potential dangers and the more illicit side of the app, but he also sees it as a way for a “subcommunity to find a comfort — to maybe not feel so alone,” he said.

When these men pop into his virtual bubble and he likes how they look, he asks if he can photograph them.

“The photographing process is a lot like hooking up,” Le said. “A lot of emotions have been invested. Some say no, some ignore me, some say I’m weird.”

But if the connection happens, it lasts — in a way.

He has never had a lasting relationship with any of his subjects and only once has he met up with the guy after the photograph, but he remembers them and their portraits live on in the collection.

Le orchestrates his meetings so that he takes his subject’s picture around 5 p.m. when the light is just right. He also uses a shallow depth of field that gives his works an almost 3-D quality.

The men have a totally comfortable, peaceful look, much like the photos of his father. Similarily there are not many items in the picture besides the subject.

Even the way Le takes the photo is simplistic, with a camera that can only take two photos.

The third series, “Expedition: Southwest,” show pieces of Le’s clothing in the barren desert landscape of the region.

Given that his clothes have been with him for years and each item holds a distinct memory, these landscapes serve not just as pretty pictures, but as self-portraits of a sort.

“I’m against the feeling of assimilating and focus instead on the land more than people because the land’s approval is all I need,” he added.