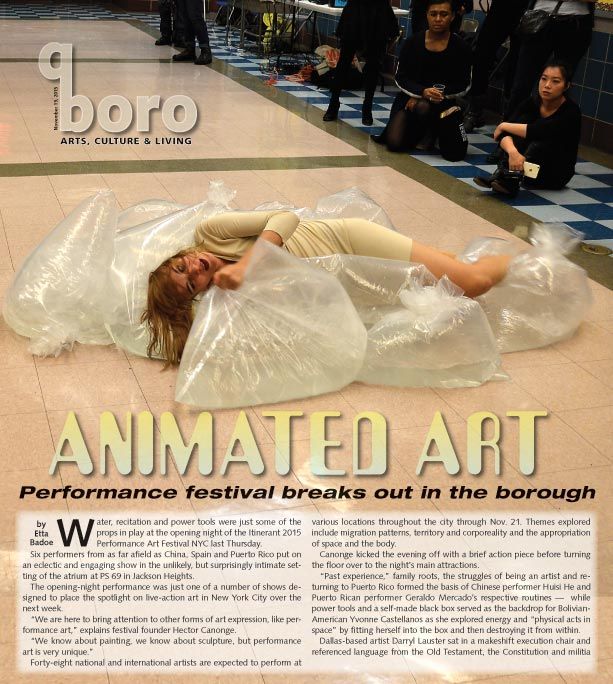 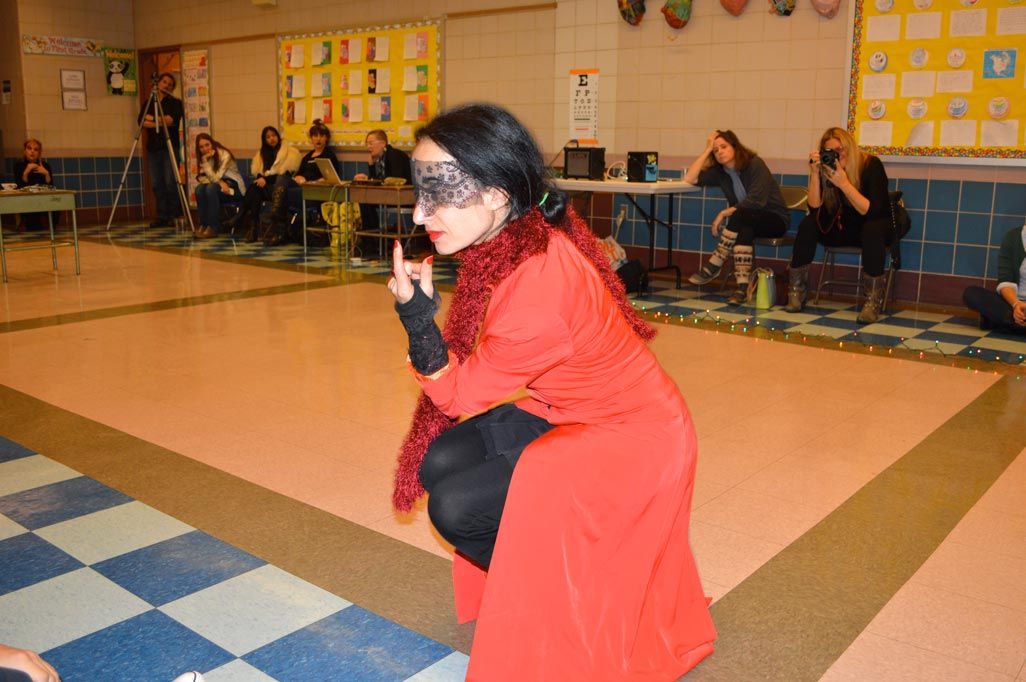 Water, recitation and power tools were just some of the props in play at the opening night of the Itinerant 2015 Performance Art Festival NYC last Thursday.

Six performers from as far afield as China, Spain and Puerto Rico put on an eclectic and engaging show in the unlikely, but surprisingly intimate setting of the atrium at PS 69 in Jackson Heights.

The opening-night performance was just one of a number of shows designed to place the spotlight on live-action art in New York City over the next week.

“We are here to bring attention to other forms of art expression, like performance art,” explains festival founder Hector Canonge.

Forty-eight national and international artists are expected to perform at various locations throughout the city through Nov. 21. Themes explored include migration patterns, territory and corporeality and the appropriation of space and the body.

Canonge kicked the evening off with a brief action piece before turning the floor over to the night’s main attractions.

“Past experience,” family roots, the struggles of being an artist and returning to Puerto Rico formed the basis of Chinese performer Huisi He and Puerto Rican performer Geraldo Mercado’s respective routines — while power tools and a self-made black box served as the backdrop for Bolivian-American Yvonne Castellanos as she explored energy and “physical acts in space” by fitting herself into the box and then destroying it from within.

Dallas-based artist Darryl Lauster sat in a makeshift execution chair and referenced language from the Old Testament, the Constitution and militia manifesto in order to document contemporary American culture, creating “something familiar, but out of context.”

Clara Macias Carcedo of Spain used her body and large bags filled with water to explore “emotions and nature and how we are composed of water,” while Florence Benichou of France closed out the evening with an act that incorporated dance and theater with themes about the 99 percent, Occupy Wall Street and the “transformation of systems.”

Gregory Paul, a sound and performance artist in his own right, provided the sound for the performers for the evening. An earlier public performance on the pedestrian plaza at 37th Road in Jackson Heights had to be canceled due to rain.

The Itinerant Festival began in 2010 at the Crossing Art Gallery in Flushing, as a “coming together of artists” who were interested in performing live-action art for an audience. As interest increased, the gathering became a festival in 2011 with the help of Queens Media Arts Development, and in 2012 Itinerant was recognized by the city as the first performance art festival to take place in the five boroughs of New York.

In 2013, Canonge created Encuentro Itinerante, a Spanish edition of the festival that performed through various South American cities. Canonge named the festival Itinerant because the word best encapsulated for him what it means to be an artist.

“We are all itinerant,” he explained. “We are always in movement, especially artists. We have the ability and in some cases the inability to displace ourselves from one country to another, from one region to another, from one state to another, so we’re always in movement,” he said. “Performance art is not theater, it’s not recitation, it’s not drama, it’s something that you experience and live. So the best way to experience it is to be here in that ephemeral moment when things are constructed.”

The artist-run festival relies on donations for its funding, and although there is no set fee to watch the performances, audience members are encouraged to give donations.

The festival continued with a number of indoor and outdoor performances in Brooklyn at the Momenta Art Gallery last Friday and at the Queens Museum of Art last weekend before moving on to the Bronx’s Museum of the Arts on Tuesday. It comes to the Glasshouse Artlifelab in Brooklyn on Friday, Nov. 20. It returns to Queens and PS 69 on Saturday, Nov. 21 at 7 p.m. for the closing performances.

For more information on the festival and performance locations you can visit the website hectorcanonge.net or check out facebook.com/itinerantpafnyc.