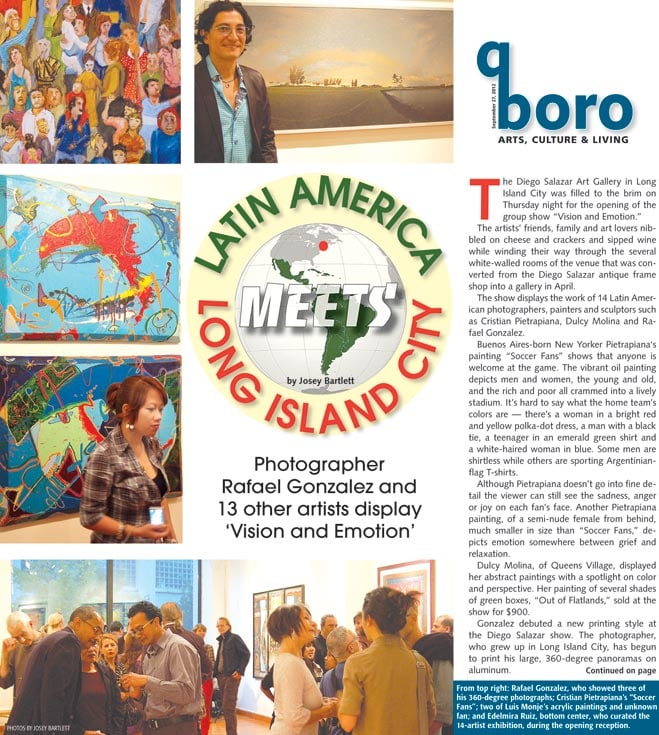 Rafael Gonzalez creates 360-degree photographs, like the one of Gantry State Park in Long Island City, left, which is displayed at the Diego Salazar Art Gallery in LIC. Cristian Pietrapiana, who painted the near-nude, right, is another artist featured in the exhibition.

Rafael Gonzalez creates 360-degree photographs, like the one of Gantry State Park in Long Island City, left, which is displayed at the Diego Salazar Art Gallery in LIC. Cristian Pietrapiana, who painted the near-nude, right, is another artist featured in the exhibition.

The Diego Salazar Art Gallery in Long Island City was filled to the brim on Thursday night for the opening of the group show “Vision and Emotion.”

The artists’ friends, family and art lovers nibbled on cheese and crackers and sipped wine while winding their way through the several white-walled rooms of the venue that was converted from the Diego Salazar antique frame shop into a gallery in April.

The show displays the work of 14 Latin American photographers, painters and sculptors such as Cristian Pietrapiana, Dulcy Molina and Rafael Gonzalez.

Buenos Aires-born New Yorker Pietrapiana‘s painting “Soccer Fans” shows that anyone is welcome at the game. The vibrant oil painting depicts men and women, the young and old, and the rich and poor all crammed into a lively stadium. It’s hard to say what the home team’s colors are — there’s a woman in a bright red and yellow polka-dot dress, a man with a black tie, a teenager in an emerald green shirt and a white-haired woman in blue. Some men are shirtless while others are sporting Argentinian-flag T-shirts.

Although Pietrapiana doesn’t go into fine detail the viewer can still see the sadness, anger or joy on each fan’s face. Another Pietrapiana painting, of a semi-nude female from behind, much smaller in size than “Soccer Fans,” depicts emotion somewhere between grief and relaxation.

Dulcy Molina, of Queens Village, displayed her abstract paintings with a spotlight on color and perspective. Her painting of several shades of green boxes, “Out of Flatlands,” sold at the show for $900.

Gonzalez debuted a new printing style at the Diego Salazar show. The photographer, who grew up in Long Island City, has begun to print his large, 360-degree panoramas on aluminum.

The durable surface allows him to print bigger, because he doesn’t have to handle the materials delicately as he would with large-scale paper printing. Also, aluminum is durable enough that the works could be left out in the rain without the ink running, Gonzalez said.

“I was pleasantly surprised,” he added.

Color saturation is another bonus of the new printing technique. Not only do the hues appear richer, the shiny surface peeks through in spots, giving the works a luminescence. In addition to the printing process, he says by shooting at sunrise and sunset he gets a more intense color palette.

“During the day colors are flat,” he said.

Gonzalez has been interested in panoramas from the get-go. When he was young, he fell in love with his brother’s ultra-wide lens camera. He later was introduced to the 180-degree works of Peter Lik.

“I thought I could do something a little different. Why not the whole 360 degrees?” Gonzalez asked.

He uses complex stitching software to meld the many images into one cohesive piece. The transition from photo to photo is seamless. The way viewers know they are getting an around-the-world-view is the banana curve of a railing or skyline that should be straight.

Although some traditional photographers frown at post-processing of images, Gonzalez doesn’t see it that way. In the darkroom artists can add a filter or develop works darker or lighter, so why can’t he do those sorts of tricks on the computer?

“It’s sort of a combination of painting and photography,” he said. “I give myself some leeway. Why not do post-processing?”

When: Through Oct. 20. Gallery hours vary.