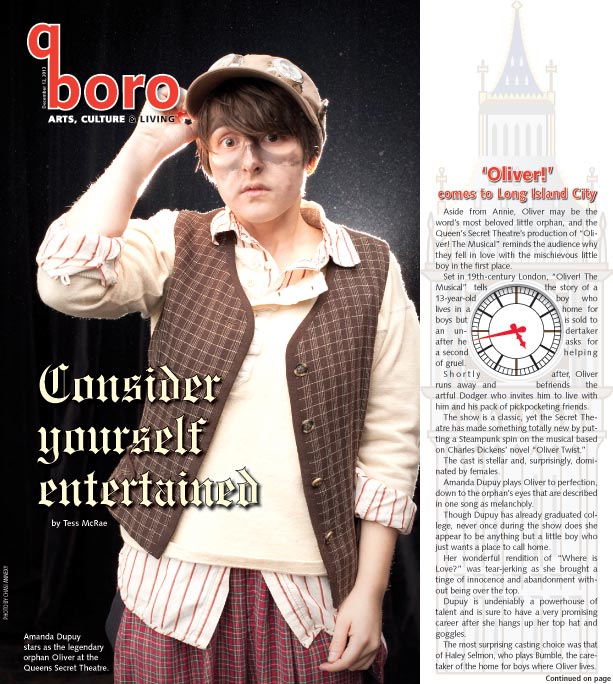 Amanda Dupuy stars as the legendary orphan Oliver at the Queens Secret Theatre. 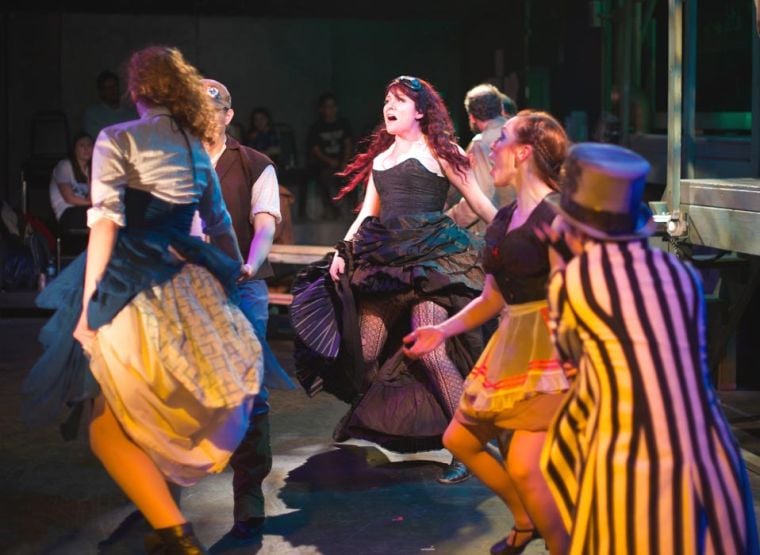 Bailey Seeker and company perform “It’s a Fine Life” in the Secret Theatre’s rendition of “Oliver! The Musical!”

Amanda Dupuy stars as the legendary orphan Oliver at the Queens Secret Theatre.

Bailey Seeker and company perform “It’s a Fine Life” in the Secret Theatre’s rendition of “Oliver! The Musical!”

Aside from Annie, Oliver may be the word’s most beloved little orphan, and the Queen’s Secret Theatre’s production of “Oliver! The Musical” reminds the audience why they fell in love with the mischievous little boy in the first place.

Set in 19th-century London, “Oliver! The Musical” tells the story of a 13-year-old boy who lives in a home for boys but is sold to an undertaker after he asks for a second helping of gruel.

Shortly after, Oliver runs away and befriends the artful Dodger who invites him to live with him and his pack of pick pocketing friends.

The show is a classic, yet the Secret Theatre has made something totally new by putting a Steampunk spin on the musical based on Charles Dickens’ novel “Oliver Twist.”

The cast is stellar and, surprisingly, dominated by females.

Amanda Dupuy plays Oliver to perfection, down to the orphan’s eyes that are described in one song as melancholy.

Though Dupuy has already graduated college, never once during the show does she appear to be anything but a little boy who just wants a place to call home.

Her wonderful rendition of “Where is Love?” was tear-jerking as she brought a tinge of innocence and abandonment without being over the top.

Dupuy is undeniably a powerhouse of talent and is sure to have a very promising career after she hangs up her top hat and goggles.

The most surprising casting choice was that of Haley Selmon, who plays Bumble, the caretaker of the home for boys where Oliver lives.

She is wonderfully wicked with a voice of perfection and complements any performer she was on stage with.

Bailey Seeker, who plays Nancy, was another stellar addition to the fantastic cast, portraying the hopelessly in-love young woman in such a way that keeps the audience rooting for her all through the show despite her association with the group of thieves and vagrants.

She gives Nancy layers that are often put aside in big musicals such as “Oliver! The Musical,” a commonality she shares with all of her castmates.

Though there were so many women standouts, that’s not to say that the men didn’t hold their own.

Richard Mazda, the founder of the Secret Theatre, does a bang-up job as the sleazy Fagin, the thief who looks after his army of pickpocketing preteens.

It is very clear that Lenny Banovez, the director, didn’t rely soley on good singers and dancers — though they all are perfectly good at both — but required that his cast be able to act as well.

The Steampunk twist is, not surprisingly, a suitable match for the musical.

Steampunk — an industrial science fiction sub-genre of stories that usually take place in an alternative post-apocalyptic 19th century — relies heavily on fantasy, something that “Oliver! The Musical” is chock-full of.

It also takes place during the same time period in which “Oliver! The Musical” takes place.

Though a few younger audience members who were avid Steampunk fans were expecting more references to the popular sci-fi genre, Banovez did well to utilize the twist as he did.

If he had pumped in any more Steampunk references, the story and the music that make “Oliver! The Musical” so special would be swallowed up into a cheesy spectacle.

But this show is anything but cheesy and is sure to entertain audiences of all ages.

Though The Secret Theatre has put on plenty of good shows, if it continues to put on productions of the same quality as “Oliver! The Musical,” it will become one of the best performance venues in the borough.