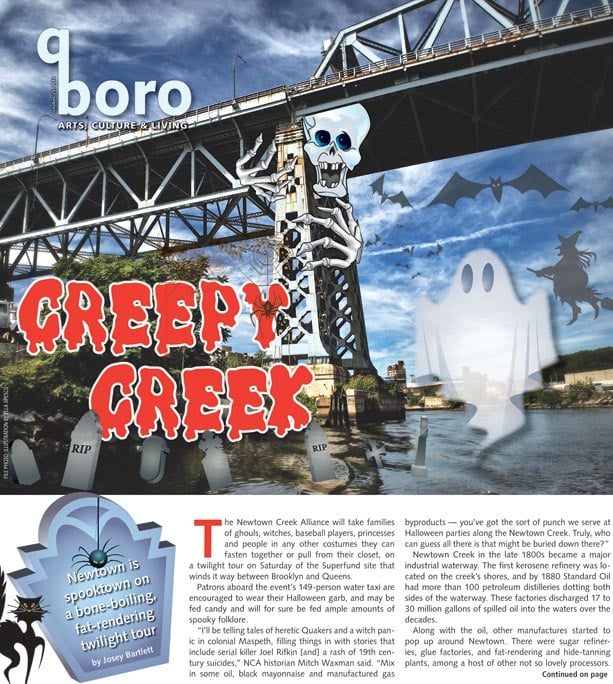 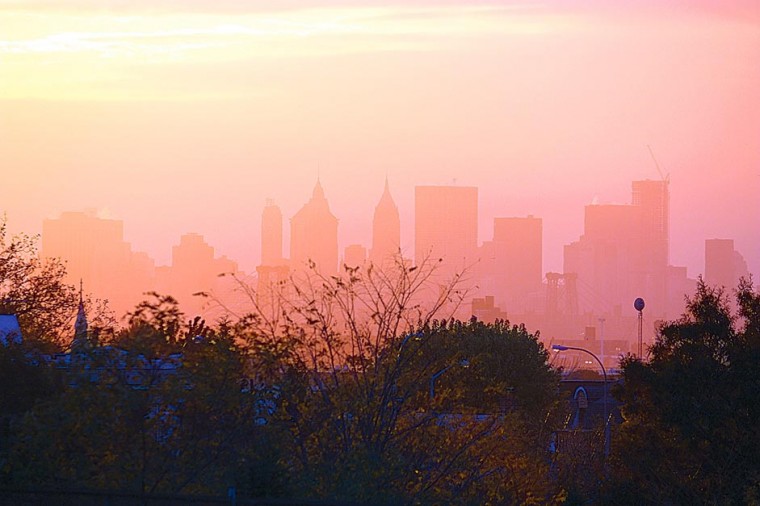 Tour-goers will get a nice view of the Manhattan skyline from Maspeth on the Halloween tour of Newtown Creek.

Tour-goers will get a nice view of the Manhattan skyline from Maspeth on the Halloween tour of Newtown Creek.

The Newtown Creek Alliance will take families of ghouls, witches, baseball players, princesses and people in any other costumes they can fasten together or pull from their closet, on a twilight tour on Saturday of the Superfund site that winds it way between Brooklyn and Queens.

Patrons aboard the event’s 149-person water taxi are encouraged to wear their Halloween garb, and may be fed candy and will for sure be fed ample amounts of spooky folklore.

“I’ll be telling tales of heretic Quakers and a witch panic in colonial Maspeth, filling things in with stories that include serial killer Joel Rifkin [and] a rash of 19th century suicides,” NCA historian Mitch Waxman said. “Mix in some oil, black mayonnaise and manufactured gas byproducts — you’ve got the sort of punch we serve at Halloween parties along the Newtown Creek. Truly, who can guess all there is that might be buried down there?”

Newtown Creek in the late 1800s became a major industrial waterway. The first kerosene refinery was located on the creek’s shores, and by 1880 Standard Oil had more than 100 petroleum distilleries dotting both sides of the waterway. These factories discharged 17 to 30 million gallons of spilled oil into the waters over the decades.

Along with the oil, other manufactures started to pop up around Newtown. There were sugar refineries, glue factories, and fat-rendering and hide-tanning plants, among a host of other not so lovely processors. Companies and people also abandoned cars and tires in the creek, and during the days of the horse and buggies, dead horses were discarded into the toxic waters.

This muck and yuck has formed a 20-foot layer of sludge called black mayonnaise on the bottom of Newtown Creek.

However, the NCA is fighting to return the creek back to its prime, because after all, before industry moved in, animals and plants thrived in the area. In 2010 the creek became a federal Superfund site, wherein the Environmental Protection Agency helps to clean the location — including removing the black mayo.

“We’re serious people doing serious work, but this tour is a little more light- hearted,” said Executive Director Kate Zidar, who will probably dress up as Rosie the Riveter from the iconic “We Can Do It” World War II posters.

Along with the creepy tales of American industry, there are some ghosts that supposedly made the tributary their home.

According to a New York Times article published in 1884, a small girl haunted Calvary Cemetery, which runs along the creek. She also “floated up Newtown Creek on a little cloud,” Waxman said.

The cemetery continues to attract believers in the supernatural. In recent years vegetables and coins were found in the cemetery laid out by followers of a syncretic Afro-Cuban religion, Waxman said. Coins and decapitated chickens were also discovered in Maspeth on the Long Island Rail Road.

“In a very much U.S. sort of value you look at a decapitated chicken and say, “Oh My God,” but for them they are just trying to allow some spirit to make it to the other side of the tracks,” Waxman said.

So with lots of stories up the NCA’s sleeves, the tour should make for a bone-chilling night.

“It’s fun for the whole family, Zidar said.”I would never go as far as to say ‘family-friendly event’ because it is a Superfund site, but this is our most family-friendly event because we will be high up and there’s lots of space indoors. Come one, come all.”

And if ghosts and black sludge are not your things, the view of the city skyline as the boat winds it way back to the pier is reason enough on its own.