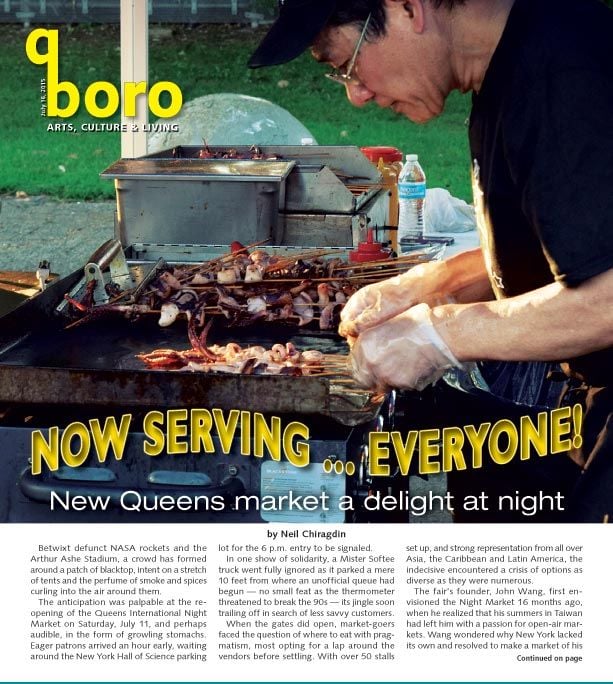 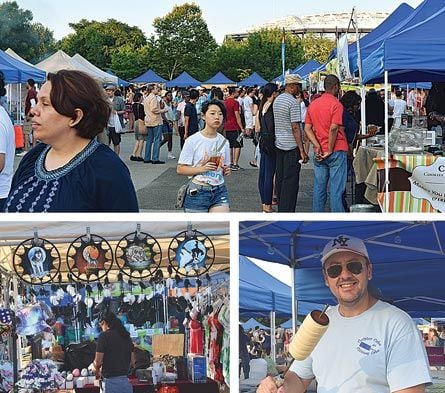 The crowds at the Queens Night Market got to check out everything from American Indian-style crafts to the Romanian chimney cake offered by Radu Sirbu. On the cover: Squid skewers grilling at Gi Hin Mama Food’s booth.

The crowds at the Queens Night Market got to check out everything from American Indian-style crafts to the Romanian chimney cake offered by Radu Sirbu. On the cover: Squid skewers grilling at Gi Hin Mama Food’s booth.

Betwixt defunct NASA rockets and the Arthur Ashe Stadium, a crowd has formed around a patch of blacktop, intent on a stretch of tents- and the perfume of smoke and spices curling into the air around them.

The anticipation was palpable at the reopening of the Queens International Night Market on Saturday, July 11, and perhaps audible, in the form of growling stomachs. Eager patrons arrived an hour early, waiting around the New York Hall of Science parking lot for the 6 p.m. entry to be signaled.

In one show of solidarity, a Mister Softee truck went fully ignored as it parked a mere 10 feet from where an unofficial queue had begun — no small feat as the thermometer threatened to break the 90s — its jingle soon trailing off in search of less savvy customers.

When the gates did open, market-goers faced the question of where to eat with pragmatism, most opting for a lap around the vendors before settling. With over 50 stalls set up, and strong representation from all over Asia, the Caribbean and Latin America, the indecisive encountered a crisis of options as diverse as they were numerous.

The fair’s founder, John Wang, first envisioned the Night Market 16 months ago, when he realized that his summers in Taiwan had left him with a passion for open-air markets. Wang wondered why New York lacked its own and resolved to make a market of his own design a reality.

Wang hopes to “leverage the diversity of Queens,” to make the market “truly international” — and he appears to be succeeding.

The fruits of the concept are borne out by the very layout of the vendors: the Peruvian ceviche stand is across from the Trinidadian shark sandwich booth, which abuts the knishery, which is beside the Hawaiian musubi tent. The elegance of the Night Market is that it embodies the patchwork of cultures spread throughout Queens, writ small.

And what a delicious patchwork it is.

The Karl’s Balls takoyaki stand proved a crowd favorite, with a line about 15 people deep immediately upon opening — its tender and crisp batter a perfect vehicle for octopus.

Taiwanese C Bao dispatched five of its seven Peking ducks within an hour and a half. The Jamaican Finga Lickin’ booth will fulfill your needs for spicy meats — go for the ribs. Sate your sweet tooth with custardy Filipino bibingka or try the Romanian chimney cake, an impressive tower of caramelized sweet dough.

The high quality of the food is even more noteworthy given that 90 percent of the items cost less than five dollars. That is by design, as Wang wants as many people to visit the fair as possible.

But while turnout has been strong, challenges remain for the Night Market. Parking is limited, so the earlier you arrive, the better — public transit is strongly encouraged. As with any outdoor event, weather poses serious logistical and therefore financial threats.

And for now, artists make up a small fraction of the market, keeping patrons focused mainly on the food.

Wang’s ultimate dream for the market would see it grow into a cultural event as much as a foodie destination, and he says he’s “campaigning hard to push artists to the forefront, both performers and those selling their wares.”

He says the historical perspective of the site is not lost on him — just half a century ago Flushing Meadows was host to the 1964-65 World’s Fair.