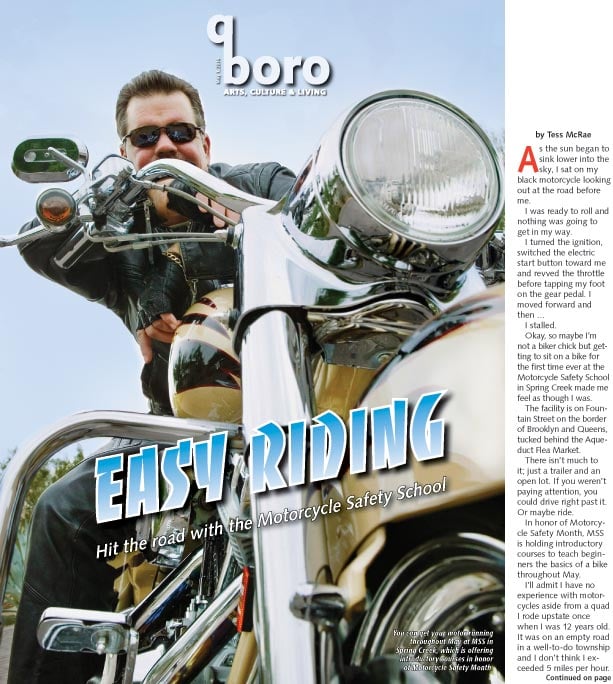 You can get your motor running throughout May at MSS in Spring Creek, which is offering introductory courses in honor of Motorcycle Safety Month. 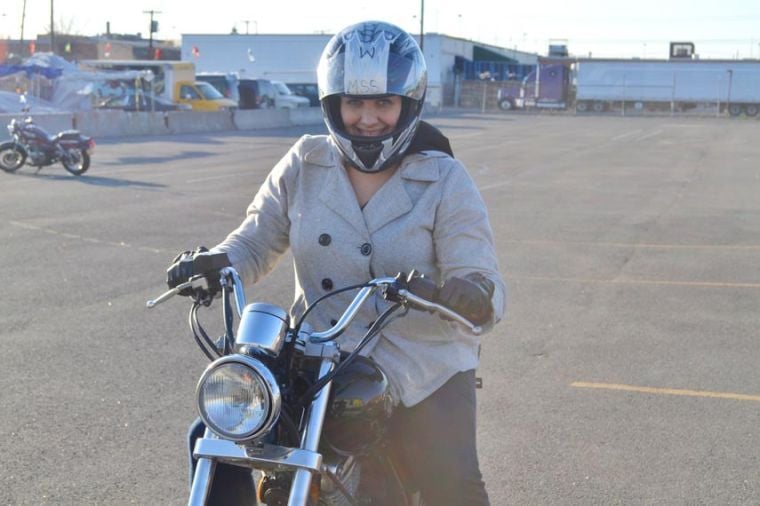 After two hours and half a dozen stalls, I was getting pretty good at riding my motorcycle.

You can get your motor running throughout May at MSS in Spring Creek, which is offering introductory courses in honor of Motorcycle Safety Month.

After two hours and half a dozen stalls, I was getting pretty good at riding my motorcycle.

As the sun began to sink lower into the sky, I sat on my black motorcycle looking out at the road before me.

I was ready to roll and nothing was going to get in my way.

I turned the ignition, switched the electric start button toward me and revved the throttle before tapping my foot on the gear pedal. I moved forward and then …

Okay, so maybe I’m not a biker chick but getting to sit on a bike for the first time ever at the Motorcycle Safety School in Spring Creek made me feel as though I was.

The facility is on Fountain Avenue on the border of Brooklyn and Queens, tucked behind the Aqueduck Flea Market.

There isn’t much to it; just a trailer and an open lot. If you weren’t paying attention, you could drive right past it. Or maybe ride.

MSS regularly holds introductory courses to teach beginners the basics of a bike which is especially appropriate this month as May is Motorcycle Safety Month.

I’ll admit I have no experience with motorcycles aside from a quad I rode upstate once when I was 12 years old. It was on an empty road in a well-to-do township and I don’t think I exceeded 5 miles per hour.

I also knew how to ride a bicycle and I’ve been driving for years so I foolishly thought, “How hard can it possibly be?”

John-Peter Cruz, my instructor and, as far as I’m concerned, a godsend who put up with my novice skills, was incredibly patient as my fellow classmate Daryl and I awkwardly went through the motions of turning a bike on.

Normally, I’d find the use of acronyms to be a bit patronizing but boiling down motorcycle basics to a simple formula was comforting and made me feel more confident.

The introductory course is two hours and, unlike MSS’ normal two-day classes, does not require a motorcycle permit.

The first hour of the class involves some paperwork and watching the instructor turn the bike on and off. Finally, Cruz said the words I had been waiting for.

I walked over to my motorcycle with confident strides, tightening my leather gloves and lowering the clear window on my helmet until it covered my eyes. Sure, my pea coat and knee-high boots from Payless made me look like a newbie but I didn’t care, I was ready to ride.

At least, I thought I was ready to ride. By the time Cruz said it was time to push off, all my confidence had been sucked out of me.

A motorcycle, I learned, is similar to a car with a manual transmission and I had no idea how to drive a stick. The clutch was the hardest part for me to remember. When I twisted the throttle, I let go of the clutch and would stall; when I focused on the clutch, I’d let go of the throttle and stop moving.

I was determined to ride a motorcycle without stalling or jerking the bike. I wanted a smooth run.

Before I had gotten on the bike, Cruz — who is a fantastic teacher — told me that the motorcycle bug is something not easily shaken and that once I got one, I was going to have the itch forever.

Of course when he said that, my instinct was to roll my eyes. I mean, it’s a bike with an engine.

But as I pushed off and placed my feet on the pegs for the last run and rolled smoothly to the other end of the range — an almost perfect cruise — I realized that I was having fun.

Not only that, I was doing pretty well for a beginner.

Then something strange happened: I found myself asking for a motorcycle manual for my permit and, surprisingly, I began inquiring about taking the next step.

I had been bitten by the motorcycle bug.

I’m not planning on joining a biker gang anytime soon. A leather jacket and a bandana will not become part of my wardrobe — though they did make me put a bandana on for hygiene.

If anything, I’ve gained respect for those who opt for riding a motorcycle, but I’d definitely consider taking a class again.

If you are interested in taking an introductory course with MSS, you can cruise over to ridemss.com.

Get your learner's permit, Tess. Do the Basic Rider Course. You can't just stop at the intro class; even if you don't buy a motorcycle. If you do go for your permit, make sure you reserve your test time on the DMV's website.

I can't wait to do my Basic Rider Course next weekend. For me, this will be a long time coming. And after I get my license, I will enjoy touring cities, in the U.S. and abroad, by motorcycle for several years to come.

Get your learner's permit, Tess. Take the Basic Rider Course. You can't stop at the intro class.

But let me also note that as the only absolute beginner in the class--though I'm a seasoned bicyclist--I overcame nervousness and uncertainty while I was on that motorcycle.

The four instructors we had throughout the course were very encouraging and highly knowledgeable. All I had to do was execute every technique they demonstrated. Of course when it came time for the evaluation, they had to put on their DMV evaluator hat to see if we could successfully execute what they taught us within the DMV parameters.

What's next for me? Just so I can improve, I will buy a cheap, used bike that I will ride around the city. I will buy riding gear that will fully protect me from head to toe and make me "visible" to cars and trucks.

I did already pay for their Basic Rider 2 course, but will wait until I have some experience riding. Plus, I enjoyed the coaching so much, I'm considering hiring them for private coaching. People hire personal trainers to get in their best shape. This, to me, is the same concept.

The one thing that was alarming was how almost all the coaches mentioned the high rate of motorcycle thefts in NYC. So if you decide to get one, make sure it's protected.