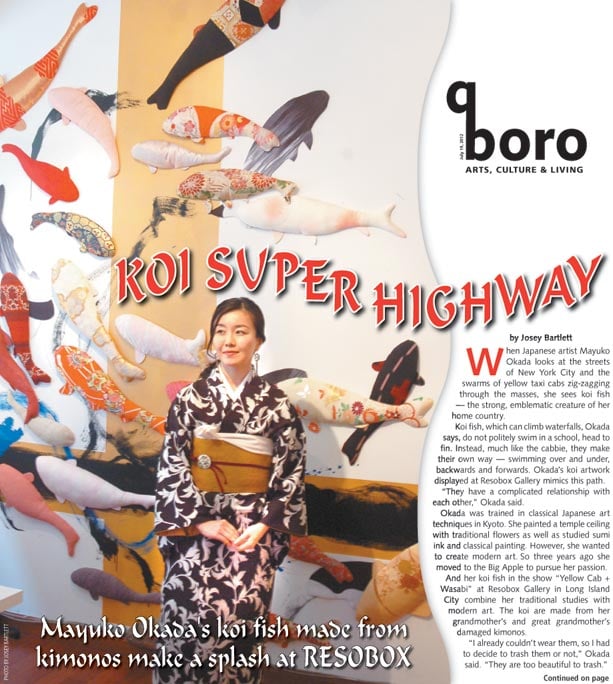 Mayuko Okada's koi fish made from kimonos make a splash at RESOBOX. 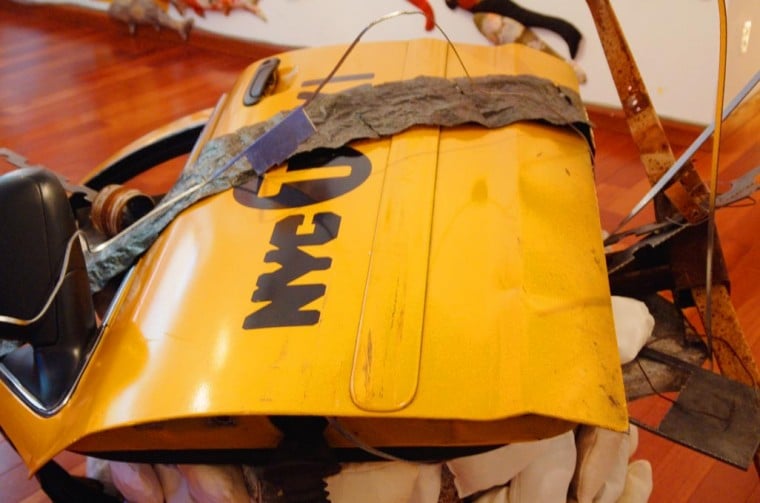 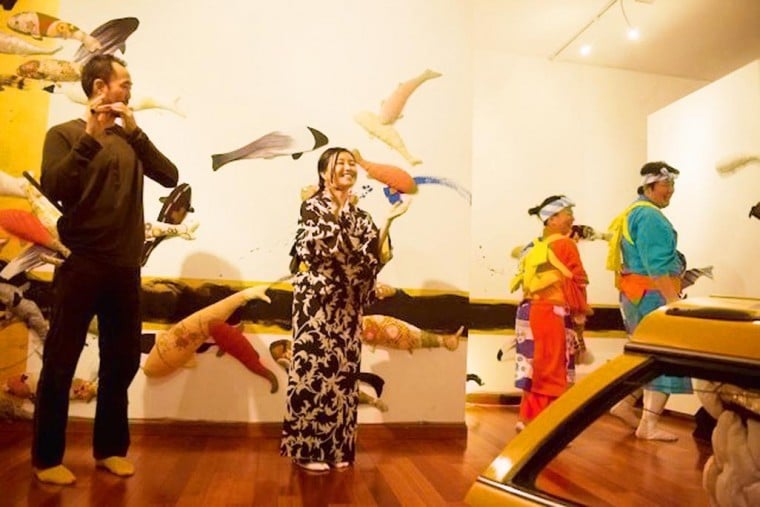 Mayuko Okada's koi fish made from kimonos make a splash at RESOBOX.

When Japanese artist Mayuko Okada looks at the streets of New York City and the swarms of yellow taxi cabs zig-zagging through the masses, she sees koi fish — the strong, emblematic creature of her home country.

Koi fish, which can climb waterfalls, Okada says, do not politely swim in a school, head to fin. Instead, much like the cabbie, they make their own way — swimming over and under, backwards and forwards. Okada’s koi artwork displayed at Resobox Gallery mimics this path.

“They have a complicated relationship with each other,” Okada said.

Okada was trained in classical Japanese art techniques in Kyoto. She painted a temple ceiling with traditional flowers as well as studied sumi ink and classical painting. However, she wanted to create modern art. So three years ago she moved to the Big Apple to pursue her passion.

And her koi fish in the show “Yellow Cab + Wasabi” at Resobox Gallery in Long Island City combine her traditional studies with modern art. The koi are made from her grandmother’s and great grandmother’s damaged kimonos.

“I already couldn’t wear them, so I had to decide to trash them or not,” Okada said. “They are too beautiful to trash.”

In addition to the koi being a link to her grandmother, the fish remind Okada of her grandfather.

“He had three sons, and didn’t know how to react to his only granddaughter,” she said.

So they connected in one way he knew; They stood in the backyard and fed the koi fish.

Okada creates the artworks by first cutting the kimonos. Then she stitches and glues the multi-colored, patterned fabric into one-foot to three-foot-long fish.

The creatures are flat on the bottom but are stuffed — somewhat like a quilt — to make them three-dimensional. This technique is also used to decorate a paddle called a hagoita, traditionally used to play a Japanese New Year game called Hanetsuki, similar to badminton, but without the net.

For the show, 100 unique koi fish swarm the wall of the small Japanese gallery space tucked into a hard-to find corner of Long Island City, just steps away from Queensboro Plaza.

Each fish, selling for $40 a piece, is slightly different, which represents the many different people living in New York City, Okada said.

Only three koi are the same color. These three yellow koi fish represent Okada. One is affixed to the ceiling, one in the middle and one below the majority of the other fish.

Along with the multi-colored koi, Okada has painted yellow and black lines on the walls as makeshift byways and boulevards for the pack of koi.

Accompanying the koi is a modern sculpture. Okada found a taxi door, which she made into a sushi roll. She made fabric rice, laid the door on top like a piece of fish and wrapped it with a long stripe of seaweed.

The show opened on July 13 to a big party. There was dancing and sushi demonstrations. A koi fish from the pond — provided by a mega-koi farm originally from Hawaii, but which has recently opened a store in New Jersey — at the show’s opening at one point catapulted itself out of the tank and onto the floor. It was immediately rescued and returned to the water.