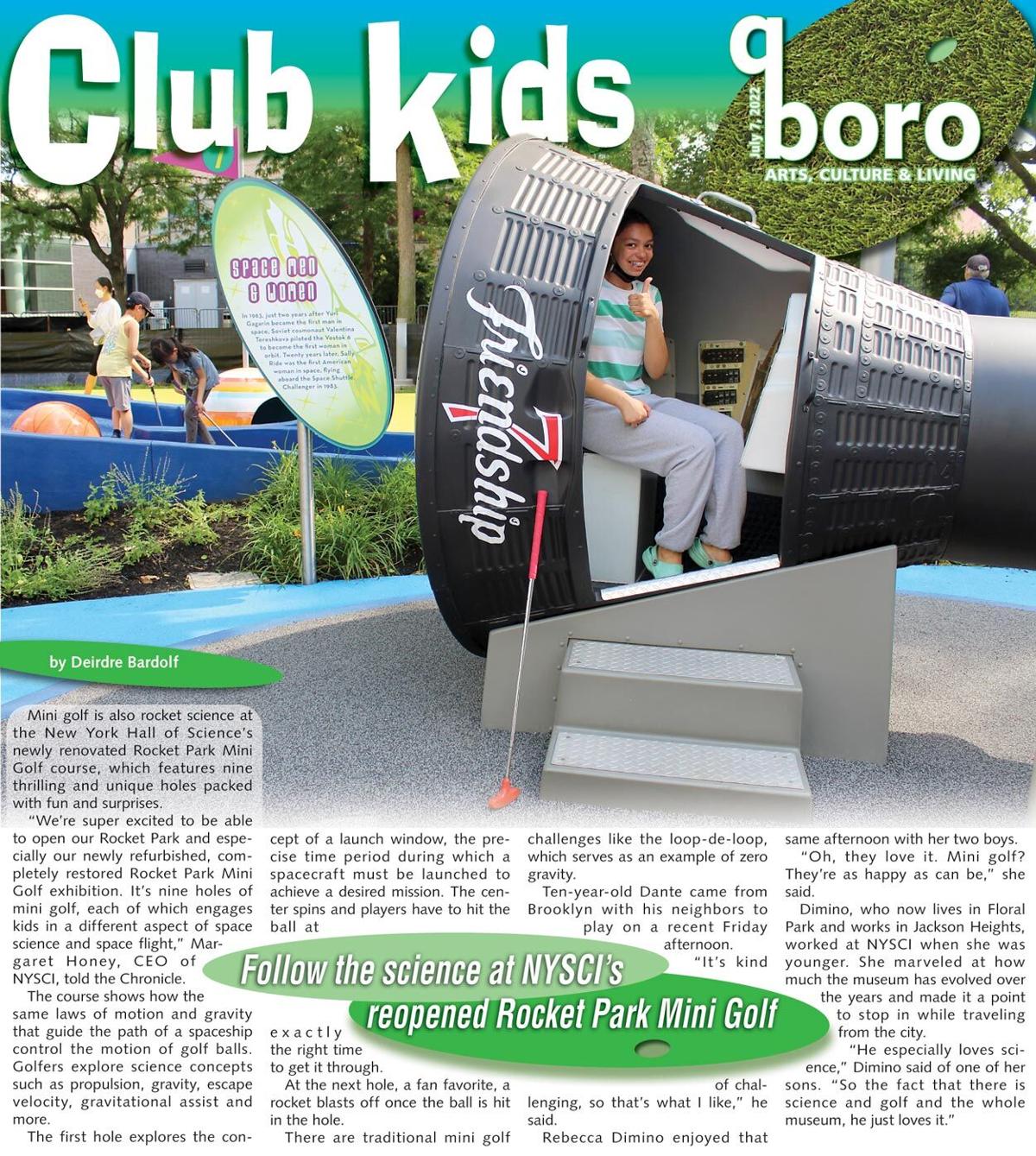 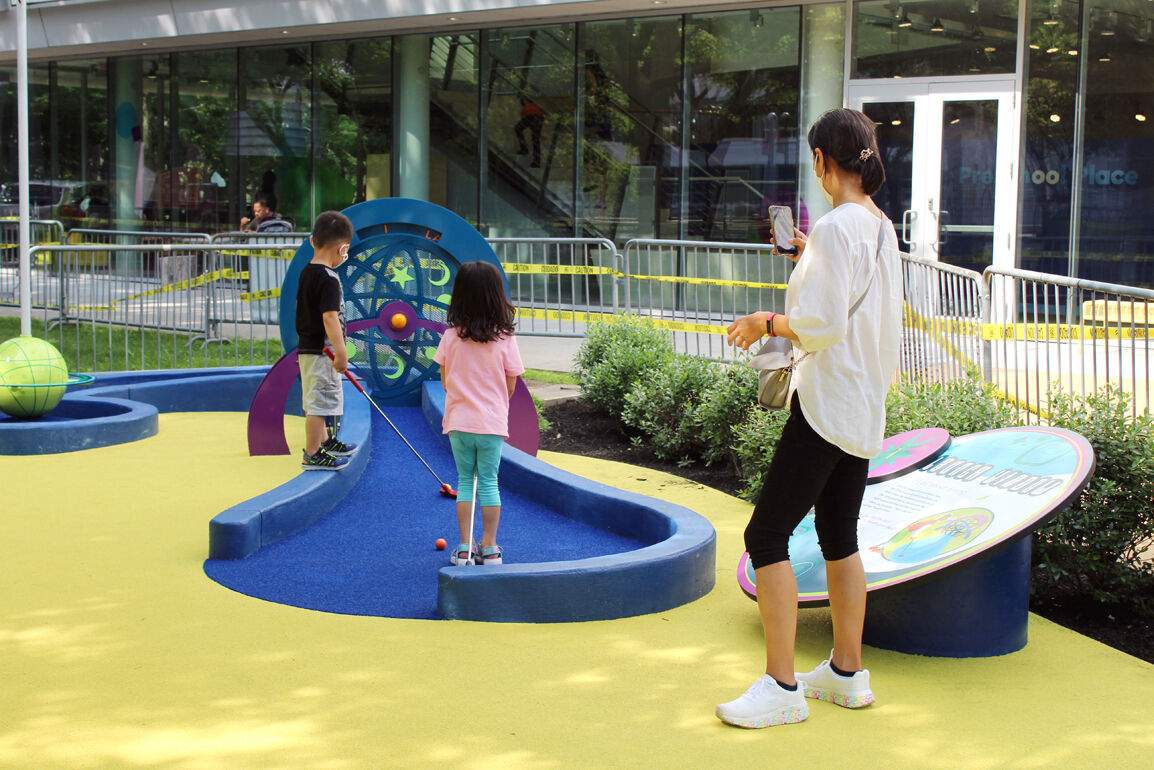 Rocket Park Mini Golf is perfect for kids 6 and up.

Rocket Park Mini Golf is perfect for kids 6 and up.

“We’re super excited to be able to open our Rocket Park and especially our newly refurbished, completely restored Rocket Park Mini Golf exhibition. It’s nine holes of mini golf, each of which engages kids in a different aspect of space science and space flight,” Margaret Honey, CEO of NYSCI, told the Chronicle.

The course shows how the same laws of motion and gravity that guide the path of a spaceship control the motion of golf balls. Golfers explore science concepts such as propulsion, gravity, escape velocity, gravitational assist and more.

The first hole explores the concept of a launch window, the precise time period during which a spacecraft must be launched to achieve a desired mission. The center spins and players have to hit the ball at exactly the right time to get it through.

At the next hole, a fan favorite, a rocket blasts off once the ball is hit in the hole.

There are traditional mini golf challenges like the loop-de-loop, which serves as an example of zero gravity.

Ten-year-old Dante came from Brooklyn with his neighbors to play on a recent Friday afternoon.

“It’s kind of challenging, so that’s what I like,” he said.

Rebecca Dimino enjoyed that same afternoon with her two boys.

Dimino, who now lives in Floral Park and works in Jackson Heights, worked at NYSCI when she was younger. She marveled at how much the museum has evolved over the years and made it a point to stop in while traveling from the city.

“He especially loves science,” Dimino said of one of her sons. “So the fact that there is science and golf and the whole museum, he just loves it.”

Victoria D. of Fresh Meadows watched her three boys explore a hole with spinning spaceships and a secret tunnel that carries the golf ball.

She appreciates having the outdoor activity and museum close to home and not having to schlep to Manhattan or Long Island for such activities, she said.

“I think for this age group, it’s very appropriate,” she added.

The mini golf course is recommended for kids ages 6 and up.

Mariella D., her friend and her dad also came from Brooklyn for the day.

“It brings people together,” she said.

The 14-year-old had been there before but loved new features like the sound effects. Her friend appreciated the creativity and colorful artwork throughout the course.

The exhibition, which first opened in 2009 and was designed by Lee H. Skolnick Architecture + Design Partnership, uses bright colors and graphics reminiscent of the 1960s Space Age. Many of the pieces, which had rusted over time and were in need of some “tender love and care,” were recently refurbished by Adirondack Studios.

The museum was closed for 15 months during the pandemic and opened back up but then Hurricane Ida struck and flooding badly damaged it. A sinkhole opened up on the golf course, said Honey.

“We were able to move pretty rapidly on a lot of the restoration work because of funding we had on hand that Assemblymember [Jeffrion] Aubry (D-Corona) had helped us obtain,” she said.

Honey added that the entire museum will be open come fall (just the North Wing and mezzanine are currently) and, she hopes, the whole science playground by next summer.

She is excited about a plan for mini golf to sometimes be offered on Saturdays when the nearby Queens Night Market is operating.

“You can come to the Queens Night Market and eat great food and then you can come over to the museum and play a round of mini golf,” she said.

Members-only hours are Wednesdays and Thursdays from 2 to 5 p.m.

An all-inclusive ticket includes mini golf and is $24 for adults and $22 for kids. Mini golf can be added onto general admission tickets, which are $16 for adults and $13 for kids for an added $6 and $5, respectively. For more information, visit nysci.org.

This article was edited to say NYSCI CEO Margaret Honey looks forward to mini golf sometimes being available when the Queens Night Market is open.