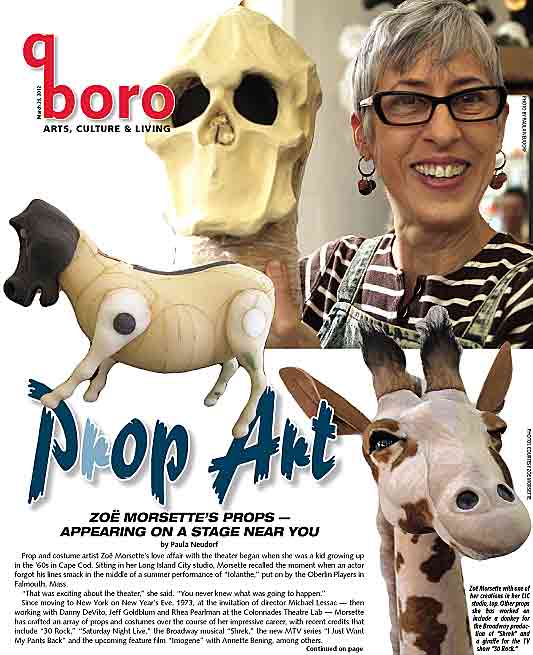 Zoe Morsette with one of her creations in her LIC studio, top. Other props she has worked on include a donkey for the Broadway production of “Shrek” and a giraffe for the TV show “30 Rock.” 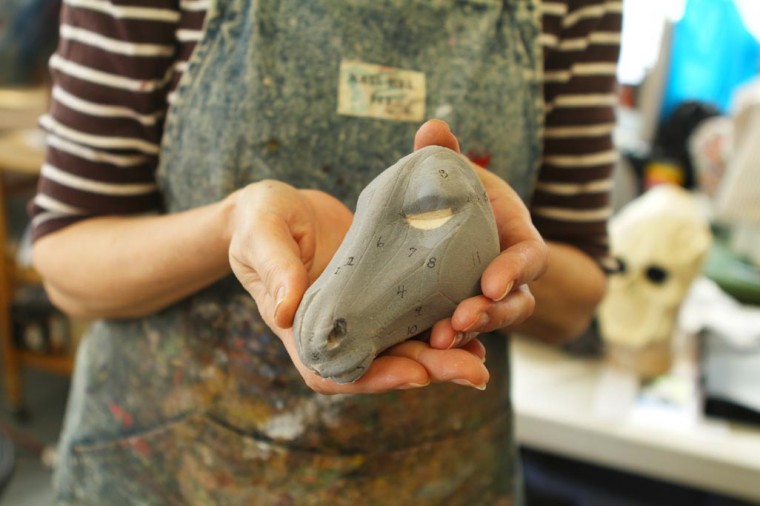 Zoe Morsette shows the model for a donkey head that will ultimately be much larger in her LIC studio. The artist’s work will be on display in an upcoming production at LIC’s Secret Theatre.

Zoe Morsette with one of her creations in her LIC studio, top. Other props she has worked on include a donkey for the Broadway production of “Shrek” and a giraffe for the TV show “30 Rock.”

Zoe Morsette shows the model for a donkey head that will ultimately be much larger in her LIC studio. The artist’s work will be on display in an upcoming production at LIC’s Secret Theatre.

Prop and costume artist Zoe Morsette’s love affair with the theater began when she was a kid growing up in the ’60s in Cape Cod. Sitting in her Long Island City studio, Morsette recalled the moment when an actor forgot his lines smack in the middle of a summer performance of “Iolanthe,” put on by the Oberlin Players in Falmouth, Mass.

“That was exciting about the theater,” she said. “You never knew what was going to happen.”

Since moving to New York on New Year’s Eve, 1973, at the invitation of director Michael Lessac —then working with Danny DeVito, Jeff Goldblum and Rhea Pearlman at the Colonnades Theatre Lab — Morsette has crafted an array of props and costumes over the course of her impressive career, with recent credits that include “30 Rock,” “Saturday Night Live,” the Broadway musical “Shrek,” the new MTV series “I Just Want My Pants Back” and the upcoming feature film “Imogene” with Annette Bening, among others.

And now she’s giving back to Long Island City, a neighborhood she’s called home for 26 years: a six-foot-long alien appendage she created will be on view in the play “Blast Radius,” premiering at LIC’s Secret Theatre on Friday, March 30.

Morsette charged a quarter of the price she would normally for the prop, she said, and has donated pieces free of charge to Secret Theatre productions in the past.

“I really like what they’re doing, and it’s my neighborhood,” she explained.

“Blast Radius” is the second part of a sci-fi trilogy premiering at the theater, though audience members need not have seen the first installment, “Advance Man,” which ran earlier, to enjoy it. The trilogy focuses on a group of astronauts who return from Mars harboring secret knowledge of a planned alien invasion.

“It’s a wonderful show,” Morsette said of the trilogy, written by Mac Rogers.

Morsette clearly relishes the theater and her work, as evidenced by the way she lovingly handled the props-in-progress littered around her light-filled studio, located in the Wills Building, which spans a block between 21st and 22nd streets just behind Silvercup Studios. She has been there for six years.

Images of donkeys and elephants in various poses, culled from the Internet — research for an ongoing commercial project — were littered on Morsette’s work table, along with pieces of foam and a sample of a gray, mesh-like material that will “read” like elephant skin.

She excitedly held up a piece of felt that will be used to create the donkey’s fur, explaining how it would have to be applied to the finished foam head.

“It really looks like donkey,” she said happily as she brushed the felt.

Some of her work has involved touching up existing props, like the emergency work she did for a Ninja-Turtle-like prop on the set of “Imogene.”

“It was about 40 pounds heavier than it had to be,” Morsette recalled. She showed up at the film’s Broad Channel set on the night before the area was evacuated because of Hurricane Irene, and after fitting the costume with mountain climbing belts that would enable its weight to be carried on the actor’s hips instead of his shoulders, made it back home on the subway just before it was shut down.

For “30 Rock” and “Saturday Night Live,” both produced by NBC, she has created a number of fantastical costumes, including a classic, antique-looking barrel made of lightweight foam which “Saturday Night Live” commissioned the Friday night before it was needed (for a skit about the stock-market crash); a grandfather-clock ensemble; and a costume of a chicken wearing a diaper, “which we just converted into a duck for Tracy Morgan,” she said.

Morsette, who originally trained as a dancer and performer at Skidmore College, said that after an injury made it unlikely she would dance professionally —not to mention the fact that her height made it difficult for her to get cast (she is 5 feet, 11 inches tall) — she was just as happy working behind the scenes as onstage.

“When the houselights go down and the curtain goes up, it’s magic,” she said.