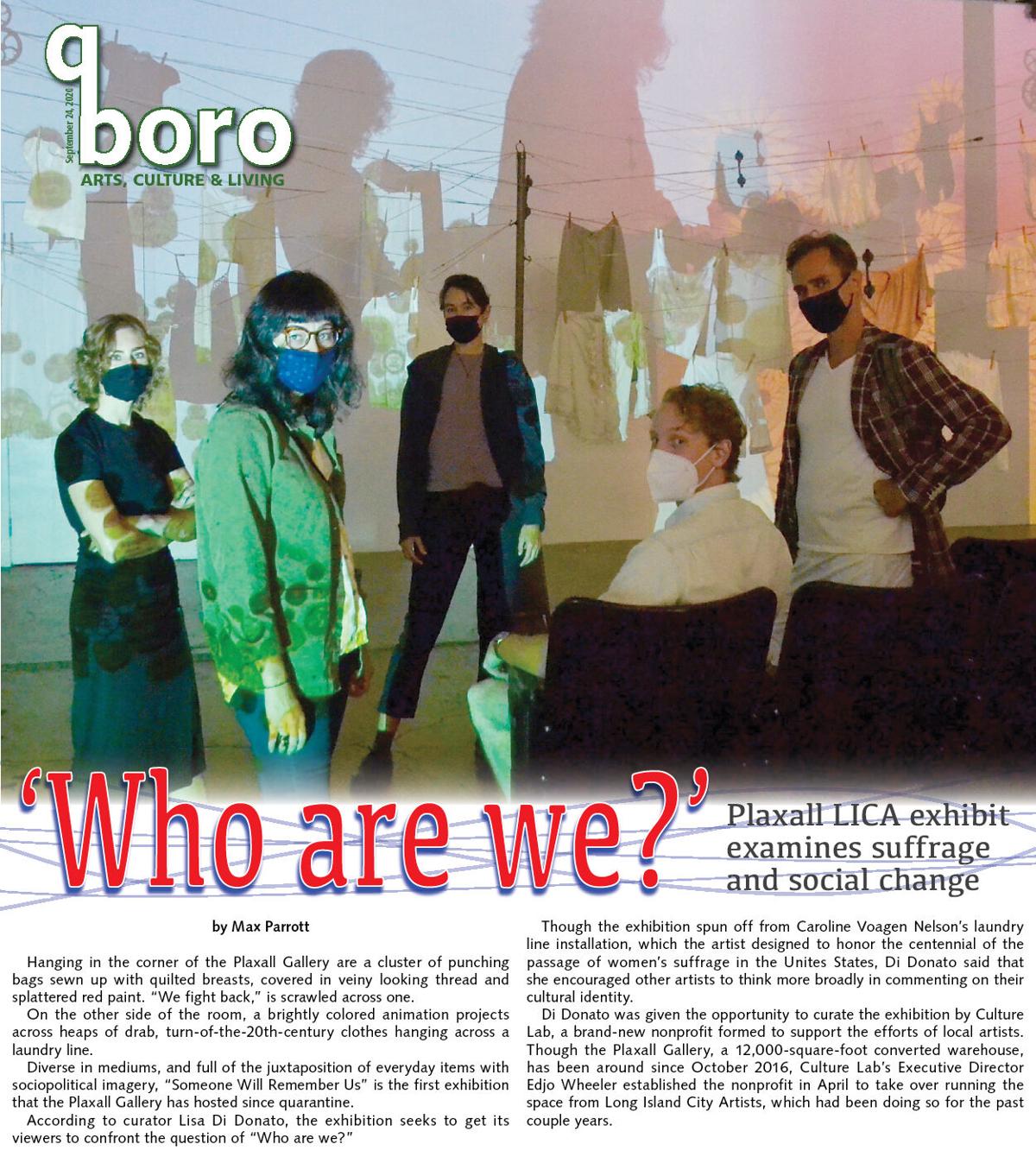 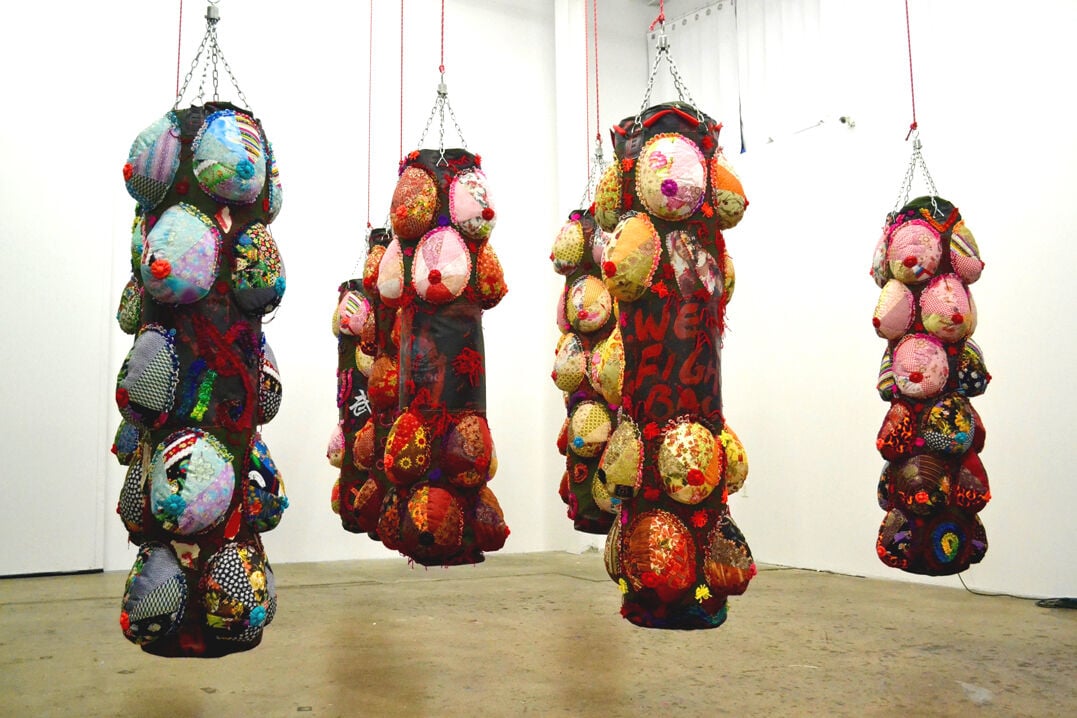 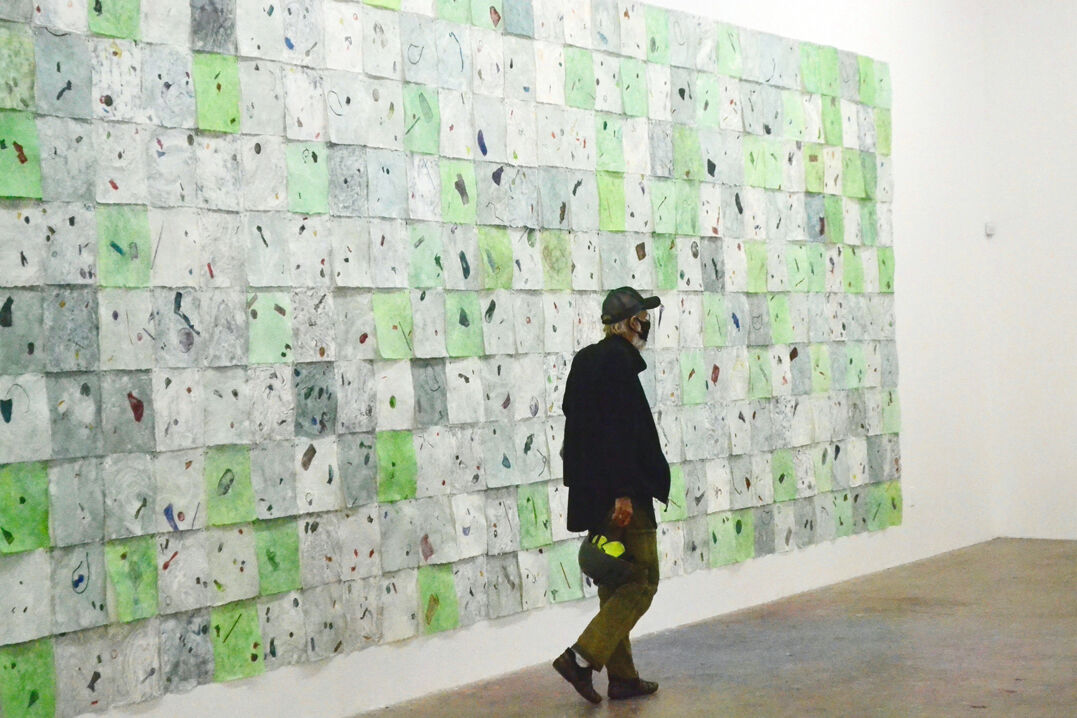 A guest walks by Amanda Thackray’s ecological-minded print installation made from homemade paper.

A guest walks by Amanda Thackray’s ecological-minded print installation made from homemade paper.

Hanging in the corner of the Plaxall Gallery are a cluster of punching bags sewn up with quilted breasts, covered in veiny looking thread and splattered red paint. “We fight back,” is scrawled across one.

On the other side of the room, a brightly colored animation projects across heaps of drab, turn-of-the-20th-century clothes hanging across a laundry line.

Diverse in mediums, and full of the juxtaposition of everyday items with sociopolitical imagery, “Someone Will Remember Us” is the first exhibition that the Plaxall Gallery has hosted since quarantine.

According to curator Lisa Di Donato, the exhibition seeks to get its viewers to confront the question of “Who are we?”

Though the exhibition spun off from Caroline Voagen Nelson’s laundry line installation, which the artist designed to honor the centennial of the passage of women’s suffrage in the Unites States, Di Donato said that she encouraged other artists to think more broadly in commenting on their cultural identity.

Di Donato was given the opportunity to curate the exhibition by Culture Lab, a brand-new nonprofit formed to support the efforts of local artists. Though the Plaxall Gallery, a 12,000-square-foot converted warehouse, has been around since October 2016, Culture Lab’s Executive Director Edjo Wheeler established the nonprofit in April to take over running the space from Long Island City Artists, which had been doing so for the past couple years.

The exhibition’s opening took place simultaneously with a jazz trombone band concert in the lot next to the gallery, a separate piece of Culture Lab programming set against the Anable Basin waterfront.

During quarantine, Wheeler said the organization had turned the space into a food pantry, Census training site and venue for Alcoholics Anonymous meetings.

“We’ve always helped local organizations. That’s why we’re here. But then it turned solely into that,” Wheeler said.

The exhibition had originally been scheduled for April as a prelude to August, the month that Congress passed the 19th Amendment, which recognized women’s right to vote in 1920. Asked how the meaning for the exhibition had changed for her during quarantine, Di Donato said that it brought some of the themes to life. The central question for her was what happens to cultural identity during periods of major social upheaval.

“The title of the show refers back to what eyes which people will use to look at us from in the future,” Di Donato said.

She added that being quarantined inside for months did give her a different appreciation for the art in the exhibition.

“We’ve all been sitting in front of screens; we have a lot of installation work here. One of the things here is that it’s very tactile, which was by design before, but now I’ve noticed how there’s a lot of very material-oriented work,” Di Donato said.

“She marbles them with inks and dyes to give it the impression of the original water source. Then she takes objects that have been located within that water source and creates mono prints,” Di Donato said.

Guests will get the opportunity to explore these textures and those of the other artists in the gallery within a social distanced capacity. For this reason, registration is recommended ahead of time by emailing info@licartists.org.