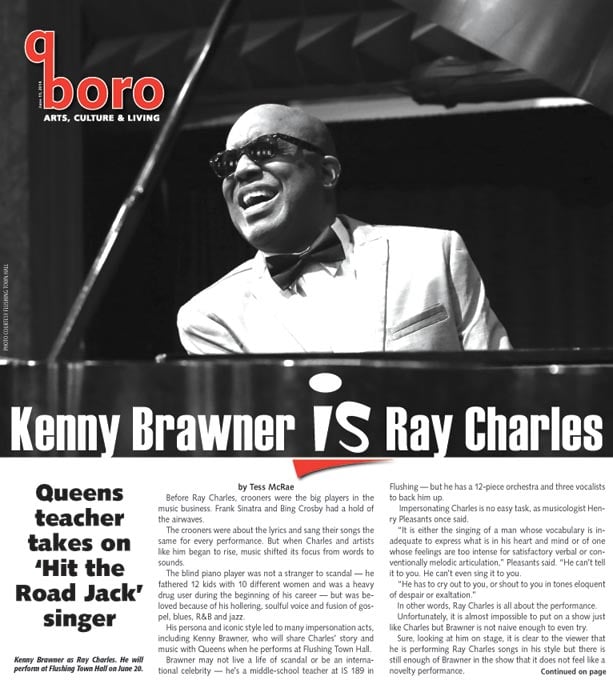 Left: The Queens teacher plays one of Ray Charles’ hits during his popular show “Kenny Brawner is Ray Charles.” Right: Kenny Brawner and six players and singers from his 15-member band.

Left: The Queens teacher plays one of Ray Charles’ hits during his popular show “Kenny Brawner is Ray Charles.” Right: Kenny Brawner and six players and singers from his 15-member band.

Before Ray Charles, crooners were the big players in the music business. Frank Sinatra and Bing Crosby had a hold of the airwaves.

The crooners were about the lyrics and sang their songs the same for every performance. But when Charles and artists like him began to rise, music shifted its focus from words to sounds.

The blind piano player was not a stranger to scandal — he fathered 12 kids with 10 different women and was a heavy drug user during the beginning of his career — but was beloved because of his hollering, soulful voice and fusion of gospel, blues, R&B and jazz.

His persona and iconic style led to many impersonation acts, including Kenny Brawner, who will share Charles’ story and music with Queens when he performs at Flushing Town Hall.

Brawner may not live a life of scandal or be an international celebrity — he’s a middle-school teacher at IS 189 in Flushing — but he has a 12-piece orchestra and three vocalists to back him up.

Impersonating Charles is no easy task, as musicologist Henry Pleasants once said.

“It is either the singing of a man whose vocabulary is inadequate to express what is in his heart and mind or of one whose feelings are too intense for satisfactory verbal or conventionally melodic articulation,” Pleasants said. “He can’t tell it to you. He can’t even sing it to you.

“He has to cry out to you, or shout to you in tones eloquent of despair or exaltation.”

In other words, Ray Charles is all about the performance.

Unfortunately, it is almost impossible to put on a show just like Charles but Brawner is not naive enough to even try.

Sure, looking at him on stage, it is clear to the viewer that he is performing Ray Charles songs in his style but there is still enough of Brawner in the show that it does not feel like a novelty performance. His show is a reminiscent love letter to Ray Charles’ music that celebrates the life of one of the godfathers of blues and, by extension, early rock ‘n’ roll. Brawner does not overlook the darker side of Charles. He fully embraces that the musician lived a rough life and made many mistakes, but even with that acknowledgment, the performance is not any less fun or entertaining.

Brawner plays the piano full-out for every song, glazing over any mistake with speed and soul, much like Charles and other piano players of the time. A personal favorite is Brawner’s version of “Mess Around,” an early hit of Charles with an up-tempo stride piano melody in the vein of Pete Johnson.

The Queens teacher is supported by a killer band of all ages, races and genders.

Watching the group of 16 on stage, it almost seems like they’re playing for no one else but themselves as Brawner encourages his band forward, leading the way down “Blues Lane.”

Though Brawner is only scheduled to perform at Flushing Town Hall for one night, the showman has concerts throughout the year and is scheduled to play at the B.B. King Blues Club in Manhattan and other venues around the city in the summer and fall.