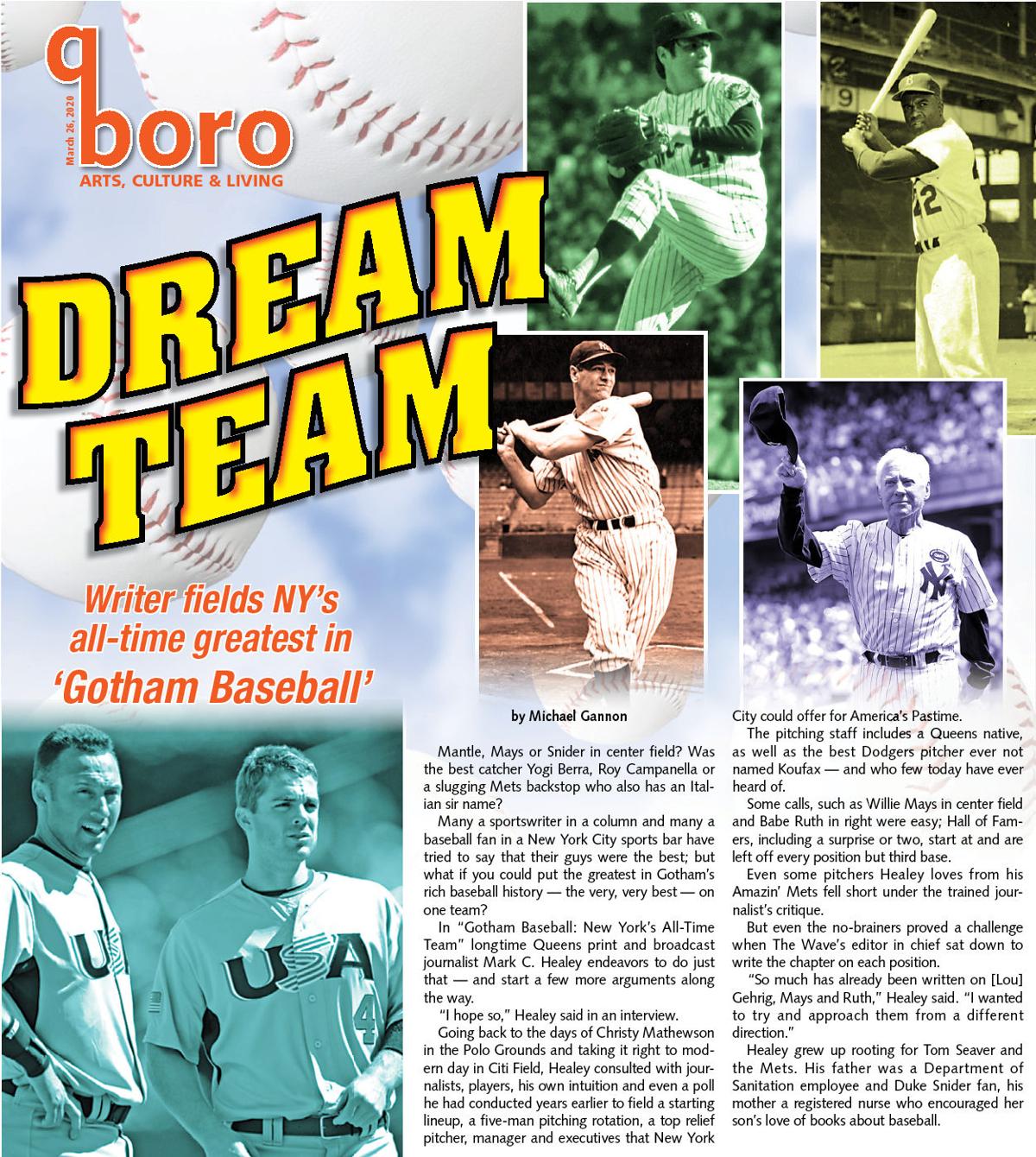 Mantle, Mays or Snider in center field? Was the best catcher Yogi Berra, Roy Campanella or a slugging Mets backstop who also has an Italian sir name?

Many a sportswriter in a column and many a baseball fan in a New York City sports bar have tried to say that their guys were the best; but what if you could put the greatest in Gotham’s rich baseball history — the very, very best — on one team?

In “Gotham Baseball: New York’s All-Time Team” longtime Queens print and broadcast journalist Mark C. Healey endeavors to do just that — and start a few more arguments along the way.

“I hope so,” Healey said in an interview.

Going back to the days of Christy Mathewson in the Polo Grounds and taking it right to modern day in Citi Field, Healey consulted with journalists, players, his own intuition and even a poll he had conducted years earlier to field a starting lineup, a five-man pitching rotation, a top relief pitcher, manager and executives that New York City could offer for America’s Pastime.

The pitching staff includes a Queens native, as well as the best Dodgers pitcher ever not named Koufax — and who few today have ever heard of.

Some calls, such as Willie Mays in center field and Babe Ruth in right were easy; Hall of Famers, including a surprise or two, start at and are left off every position but third base.

Even some pitchers Healey loves from his Amazin’ Mets fell short under the trained journalist’s critique.

But even the no-brainers proved a challenge when The Wave’s editor in chief sat down to write the chapter on each position.

“So much has already been written on [Lou] Gehrig, Mays and Ruth,” Healey said. “I wanted to try and approach them from a different direction.”

Healey grew up rooting for Tom Seaver and the Mets. His father was a Department of Sanitation employee and Duke Snider fan, his mother a registered nurse who encouraged her son’s love of books about baseball.

Healey writes that, “My only regret is that my mom passed away from cancer before this book could be published. I’m thankful that she was alive long enough to know that someone agreed to publish it.”

It only seemed natural that he would begin “Gotham Baseball,” initially a print-only magazine from 2005 to 2008. It has become a website, blog and a labor of love.

“And every edition of the magazine is in the permanent collection of the Hall of Fame,” Healey said, with a smile palpable at the other end of the phone. The publication even earned Healey a letter of approval from George Steinbrenner in 2007.

The 191-page book is illustrated with photographs, plus artwork by John Pennisi.

Published by The History Press, it is scheduled to premiere on April 6, and can be purchased for $21.99 at historypress.com, on Amazon, or from Healey directly atgothambaseball.com (search for “book”).

But while Healey said the end product might seem a logical extension of his Gotham Baseball enterprise, it was no sure thing until about 2017.

“I had originally planned this as kind of a ‘Field of Dreams’ historical novel,” Healey said. “I had the first chapter written out.” Then Marty Appel, the former Yankees publicist and baseball historian whom Healey had come to know over the years, had a look.

Like any team, the Gothams would need an eye-catching logo and, of course, uniforms, both home and away. Through mutual acquaintances Healey came across artist and designer Todd Radom, whose list of clients include Major League Baseball, the National Football League and National Basketball Association, among others. Radom suggested back in 2014 that they collaborate on a future project. Approached for uniforms and a logo, he agreed.

Putting the players from different eras into those uniforms fell to Pennisi, whom Healey had met more than a decade ago and who had done work on the magazine — and who also happens to be the official artist of the New York chapter of the Baseball Writers Association of America.