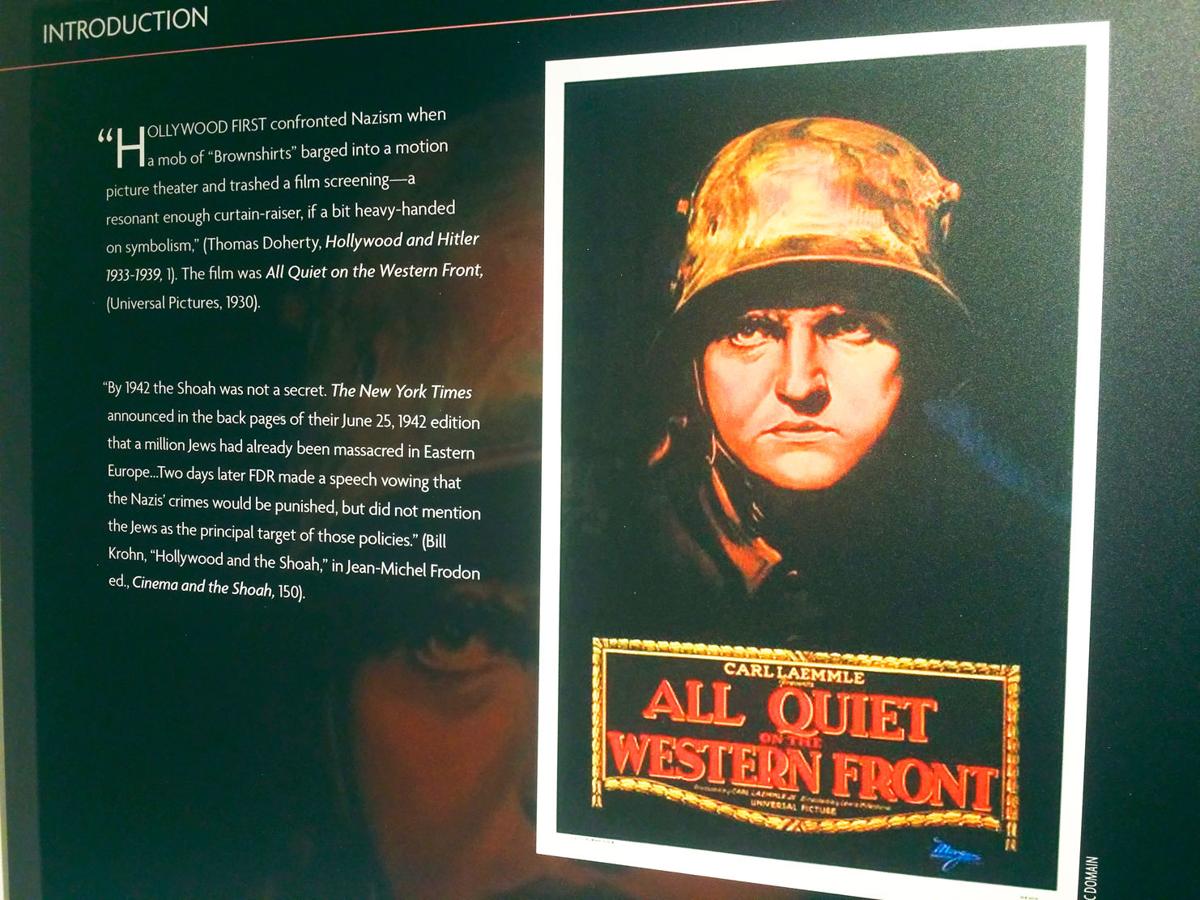 Nazis disrupted a 1930 Berlin screening of “All Quiet on the Western Front” and demanded changes to the film, which were made. 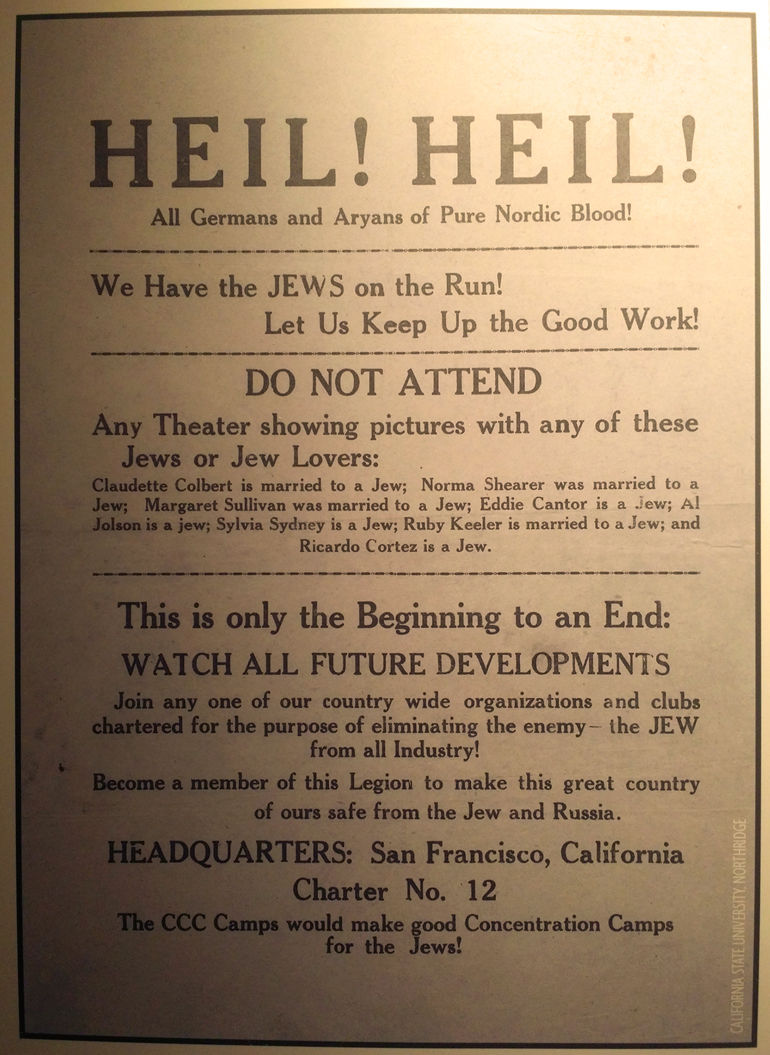 A 1934 poster in the United States called for a boycott of movies with “Jews or Jew lovers” in them, and said the action was “only the Beginning to an End.”

Nazis disrupted a 1930 Berlin screening of “All Quiet on the Western Front” and demanded changes to the film, which were made.

A 1934 poster in the United States called for a boycott of movies with “Jews or Jew lovers” in them, and said the action was “only the Beginning to an End.”

Hitler loved movies. He wanted movies to love him.

“Producing Silence: Hollywood, the Holocaust and the Jews” at the Kupferberg Holocaust Resource Center and Archives at Queensborough Community College, explores how the Third Reich censored U.S. movie studios to get Hitler cinematic love, and how American anti-Semitism and the studios’ mostly Jewish-immigrant movie moguls eased that path.

The exhibit was curated by Rabbi Isidoro Aizenberg, the center’s scholar-in-residence.

Between 1933 and 1942, the Nazis exercised censorship in Hollywood in part through the industry’s Production Code Administration. Forbidden were Jewish actors, Jewish characters, positive Jewish themes and any negative portrayals of the Nazis or Hitler.

The exhibit starts with a movie poster and text telling how the trouble started with Universal Pictures’ anti-war film “All Quiet on the Western Front.” In December 1930, Nazis led by Joseph Goebbels released stink bombs, sneezing powder and white mice to disrupt a Berlin showing. The Nazis then demanded changes.

The biggest Hollywood studios were dependent on the lucrative German market. The studio heads rationalized the need to maintain a good German business and didn’t see what the rest of the world didn’t see: the full looming Nazi menace. Universal President Carl Laemmle, a German Jewish immigrant who left close relatives behind, didn’t want the movie banned in his fatherland and changed it to suit the Germans. He later visited Germany and was pleased to see that it was “doing good business.”

That must have been the last time Laemmle was pleased about anything concerning Germany. A photo of Laemmle with his son and daughter explains that he soon helped about 300 German Jewish family members and strangers escape to America.

As the 1930s progressed, the studios repeatedly acceded to Nazi demands, apparently thinking they could ride out the problem with compromise and patience.

Twentieth Century resisted, producing “The House of Rothschild.” But the fearful public complained it was “too Semitic.” Positive Jewish messages were removed and an anti-Semitic character was added, earning the movie rousing reviews and a Best Picture Academy Award nomination. Perhaps producer Dar ryl F. Zanuck was doing penance later when, in 1947, he produced the expose of American anti-Semitism, “A Gentleman’s Agreement.”

Warner Brothers repeatedly pushed back. In 1933, it was the first to close its German offices, and produced the Hitler parody “Bosko’s Picture Show.” Jack L. Warner helped launch the Hollywood Anti-Nazi League in 1936 and co-produced “Confessions of a Nazi Spy” in 1939, earning himself a place on a Hitler “extinction list.”

In 1940, the financial and artistic independence of Charlie Chaplin inspired him to push back even harder. Though making a comedy about Hitler was controversial, Chaplin famously said he was determined to go ahead because “Hitler must be laughed at.” Chaplin wrote, produced, directed, starred in and composed the music for “The Great Dictator.”

The exhibition is text-heavy, with posters and photos and a few short videos. Patiently reading visitors will be rewarded with insight into Hollywood’s procession of denial, compromise and regret.

It’s easy to feel holier than they. In a scathing 2013 critique of Ben Urwand’s book, “The Collaboration: Hollywood’s Pact with Hitler,” accompanied by kinder words for Thomas Doherty’s “Hollywood and Hitler: 1933-1939,” David Denby of The New Yorker noted that contemporary movies are being tailored to please the Chinese government.