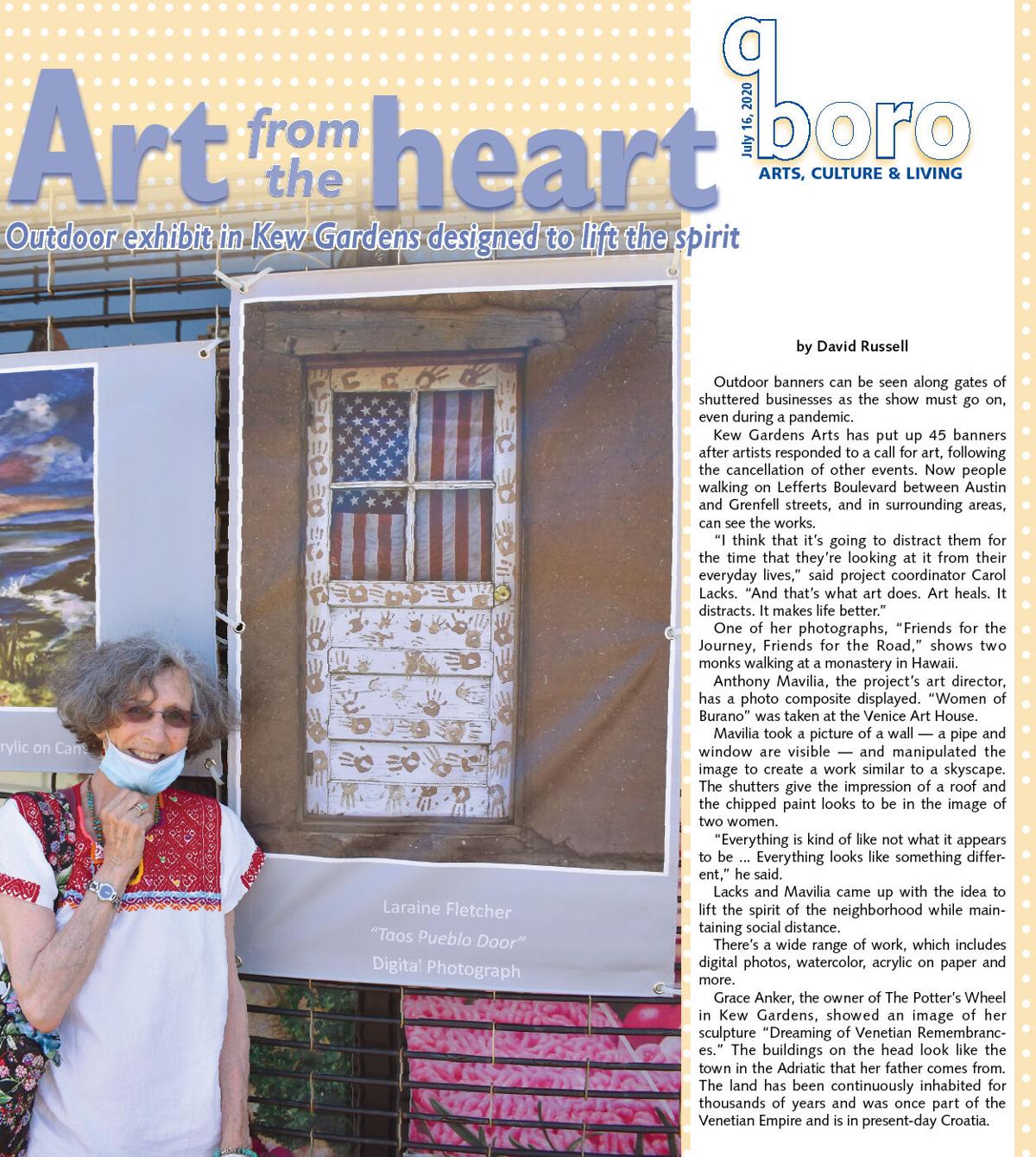 On the cover: Laraine Fletcher’s work shows a door with handprints and a flag behind the window in New Mexico. 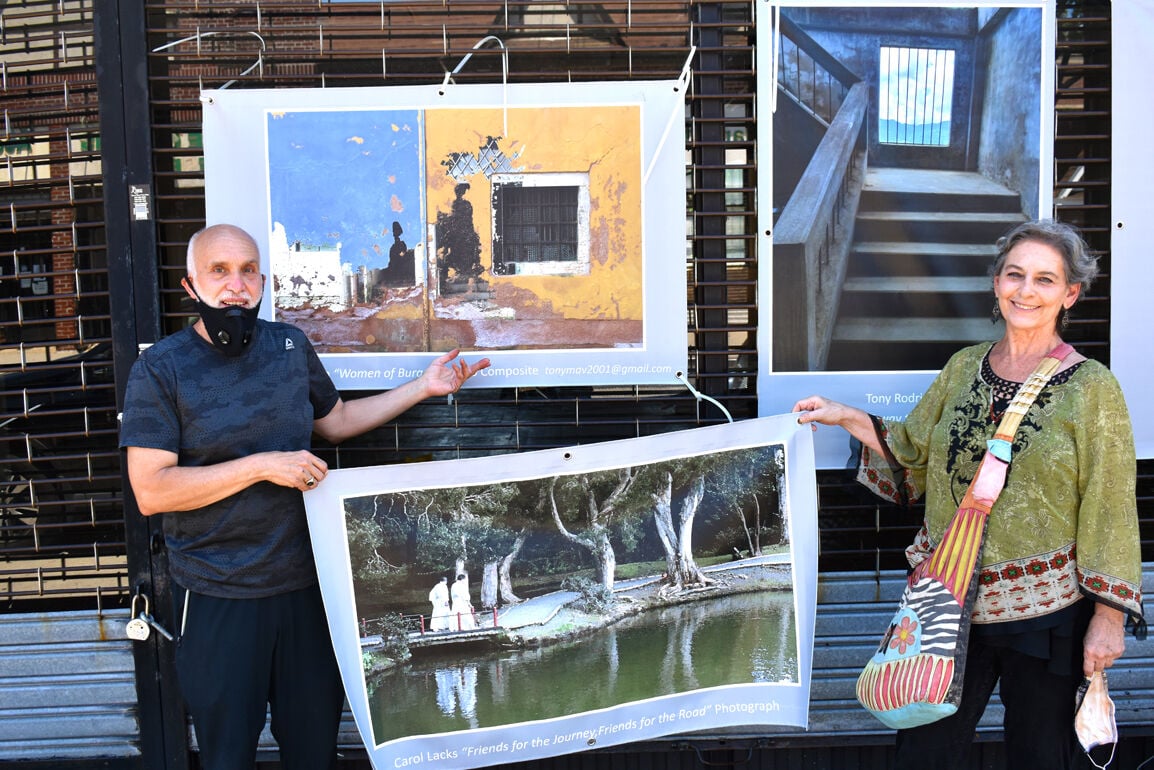 Anthony Mavilia, the art director for the Kew Gardens Arts project, and Carol Lacks, the project coordinator, display their work. Grace Anker, far left, owner of The Potter’s Wheel, submitted the image of a sculpture, “Dreaming of Venetian Remembrances.”

On the cover: Laraine Fletcher’s work shows a door with handprints and a flag behind the window in New Mexico.

Anthony Mavilia, the art director for the Kew Gardens Arts project, and Carol Lacks, the project coordinator, display their work. Grace Anker, far left, owner of The Potter’s Wheel, submitted the image of a sculpture, “Dreaming of Venetian Remembrances.”

Outdoor banners can be seen along gates of shuttered businesses as the show must go on, even during a pandemic.

Kew Gardens Arts has put up 45 banners after artists responded to a call for art, following the cancellation of other events. Now people walking on Lefferts Boulevard between Austin and Grenfell streets, and in surrounding areas, can see the works.

“I think that it’s going to distract them for the time that they’re looking at it from their everyday lives,” said project coordinator Carol Lacks. “And that’s what art does. Art heals. It distracts. It makes life better.”

Anthony Mavilia, the project’s art director, has a photo composite displayed. “Women of Burano” was taken at the Venice Art House.

Mavilia took a picture of a wall — a pipe and window are visible — and manipulated the image to create a work similar to a skyscape. The shutters give the impression of a roof and the chipped paint looks to be in the image of two women.

“Everything is kind of like not what it appears to be ... Everything looks like something different,” he said.

Lacks and Mavilia came up with the idea to lift the spirit of the neighborhood while maintaining social distance.

There’s a wide range of work, which includes digital photos, watercolor, acrylic on paper and more.

Grace Anker, the owner of The Potter’s Wheel in Kew Gardens, showed an image of her sculpture “Dreaming of Venetian Remembrances.” The buildings on the head look like the town in the Adriatic that her father comes from. The land has been continuously inhabited for thousands of years and was once part of the Venetian Empire and is in present-day Croatia.

William Jackson’s work depicts a Kenyan Cricket Warrior. The Maasai Cricket Warriors team has drawn attention over the years as they advocate for ending the practice of female genital mutilation.

Victor Shemper has a watercolor of a home, “Passage of Summer,” displayed.

There are a few familiar sites on the posters for area residents. Two oil-on-canvas works from Weimen Mo are “Park Lane South” and “The Church in the Gardens.”

On the Kew Gardens Arts website, Mo says “painting is in fact my intimate conversation with the outside world. To my mind, so is the action of viewing an artwork.”

Laraine Fletcher took a photo more than 15 years ago when she was in Taos Pueblo, NM of a door with handprints all over it and an American flag in the window. It’s good she got the shot.

“I went back, I was there a few years later and they painted over the door,” Fletcher said.

The New Mexico site was popular with photographers and the door was even in Shutterbug magazine, according to Fletcher.

Lynne Muchinsky has two very different pieces of art, “Amsterdam” and “Lilly Girl,” the latter of which shows a dog running in a park. Muchinsky moved to Kew Gardens in 1992 and the view from her window is of Forest Park.

“On many occasions the park has given me inspiration for a painting,” she said on the Kew Gardens Arts website. “I see something new and wonderful each time I sit on a bench or walk on a trail.”

There is also a group banner as 22 artists ages 4 to 14 sent artwork. The pieces include self-portraits, landscapes, COVID-19 precautionary messages, depictions of fictional characters and abstracts.

The art will be displayed through Sept. 21. “I hope at the very least it puts a smile on their face because it’s been pretty dark times we’re living through,” Jackson said.