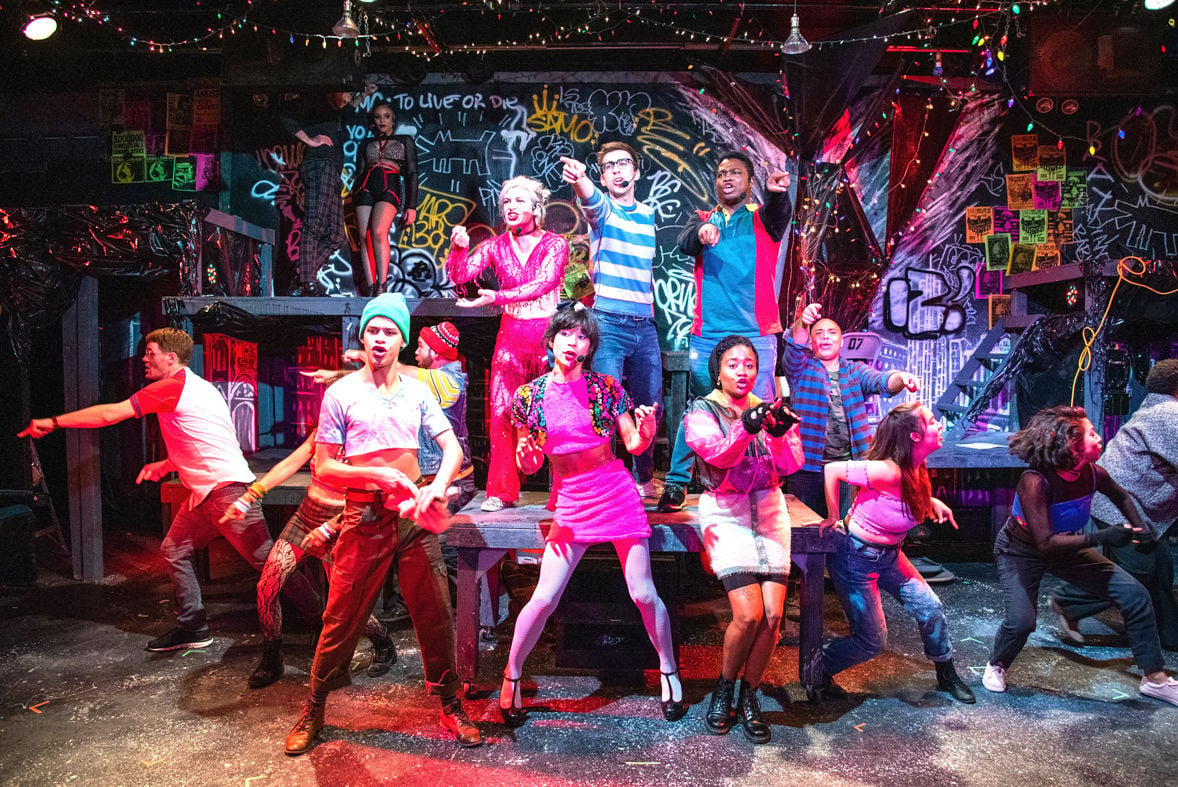 Miriam Pultro as Maureen, Evan Maltby as Mark and Kedrick Faulk as Tom Collins stand above other members of the cast in this number from “Rent” at The Secret Theatre. 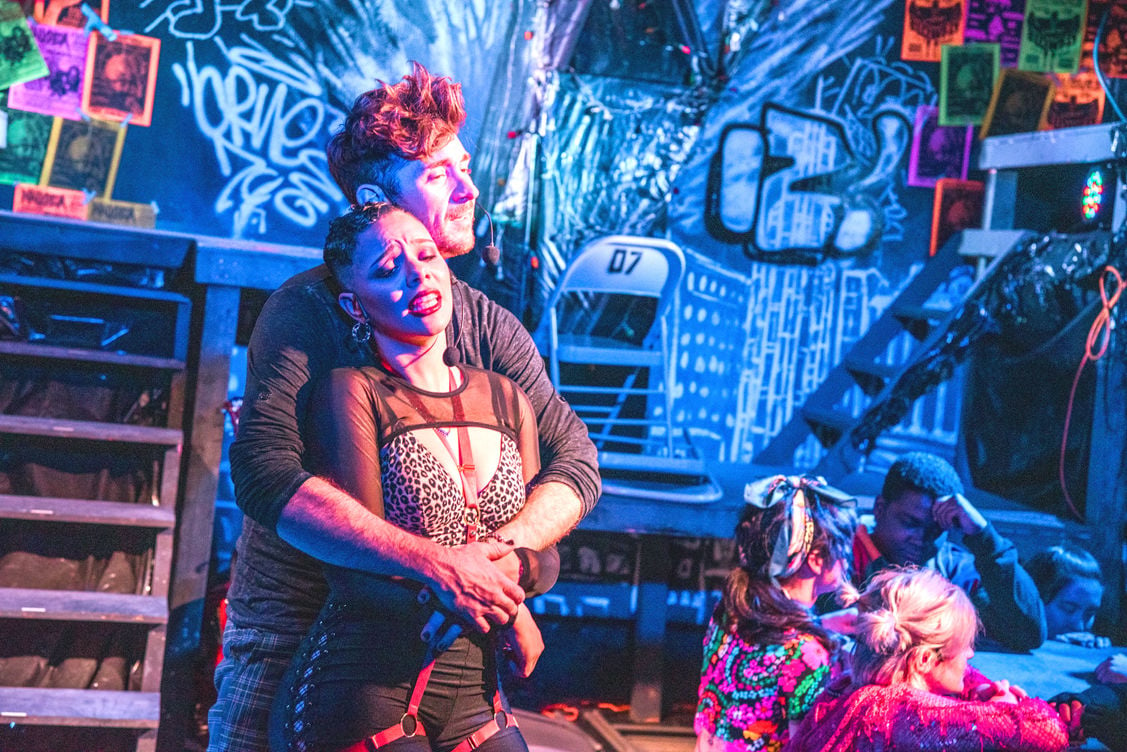 Kurt Phelan as Roger and Alex Lugo as Mimi. 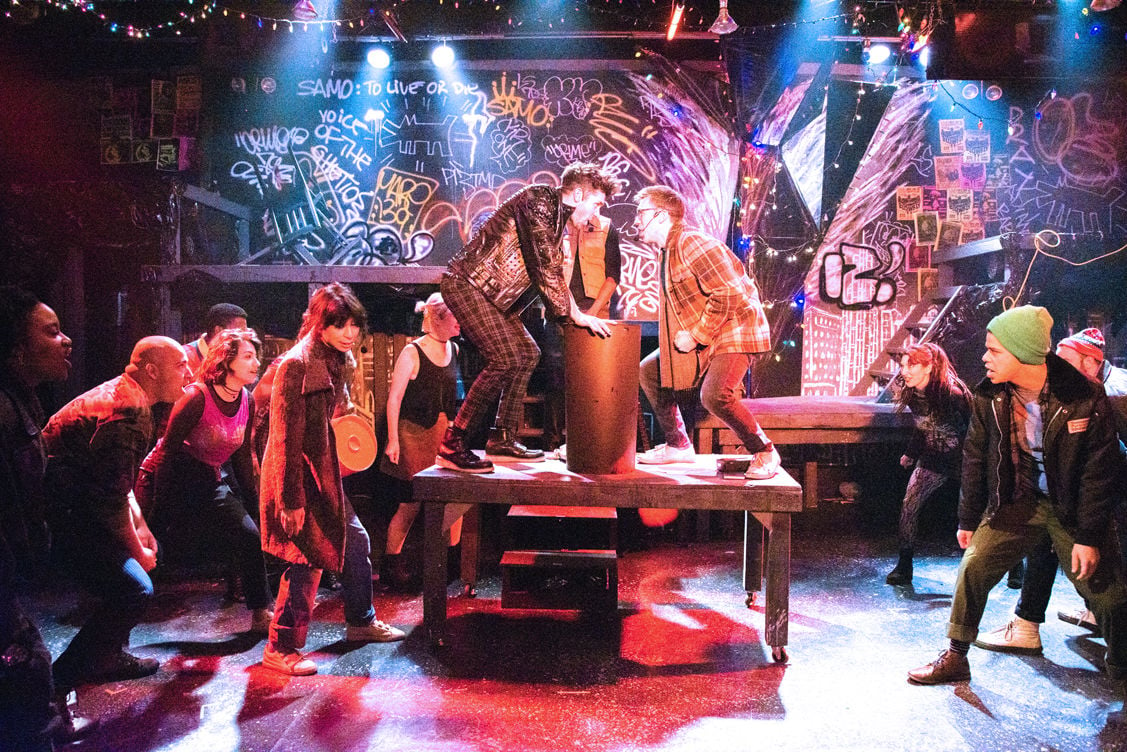 Roger and Mark on the table, surrounded by other area denizens. 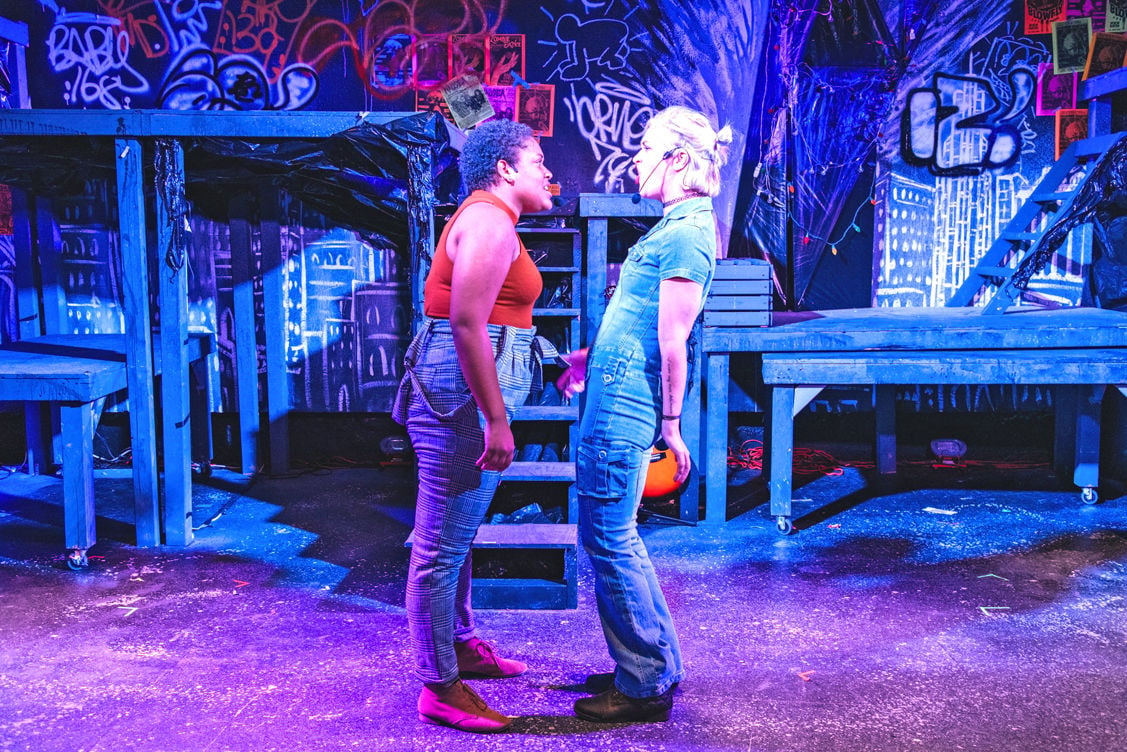 Miriam Pultro as Maureen, Evan Maltby as Mark and Kedrick Faulk as Tom Collins stand above other members of the cast in this number from “Rent” at The Secret Theatre.

Kurt Phelan as Roger and Alex Lugo as Mimi.

Roger and Mark on the table, surrounded by other area denizens.

Step inside Long Island City’s Secret Theatre between now and Oct. 6 and you will find yourself completely immersed in the world of Jonathan Larson’s “Rent,” the groundbreaking musical that depicts life in New York City in the early 1990s, when many of the city’s denizens were struggling for their very survival.

Although director Lauren Elder, in a note in the program, describes the show as “a period piece,” in many ways it remains as relevant today as it was when it originally burst upon the theatrical scene nearly a quarter of a century ago.

Helping propel the show into its almost instantaneous legendary status was the untimely death of its young creator, who, in a rare accomplishment, single-handedly wrote its book, music and lyrics, basing it to a great extent on Puccini’s opera “La Boheme.”

Just as the show was about to begin previews off-Broadway, Larson passed away unexpectedly at the age of 35. So impactful was the show that, not long after, it transferred to Broadway, where it became one of the longest-running shows in history.

“Rent” has, surprisingly, not been performed in Queens as frequently as one might have expected, and this incarnation — with an energetic, talent-packed cast, a crackerjack band and consistently interesting staging — is a fine opportunity to catch up with it ... again or for the first time.

Those who are not familiar with the show, which is largely sung, will undoubtedly miss many of its nuances and, perhaps, even some of its plot developments. But, as rendered at The Secret, it is an in-your-face (literally, in the cozy confines of this black box theater) experience, and the show’s emotional power remains on display.

The story, which begins and concludes on two consecutive Christmas Eves, tackles numerous heavy issues: AIDS, homelessness, romantic involvement, infidelity, betrayal and, yes, the meaning of life. But at its core, it’s about love, which is depicted as perhaps the strongest emotion human beings are capable of feeling.

At its center are Mark (Evan Maltby), a budding filmmaker with an overprotective mother, his roommate Roger (Kurt Phelan), a struggling songwriter, and Mimi (Alex Lugo), a junkie who lives downstairs. Maltby and Phelan share two of the musical highlights, the title song in which they question how they’re “gonna pay last year’s rent,” and the pulsating “What You Own,” leading them to the conclusion that when you’re living in America, “you’re what you own.”

In another musical moment, Phelan and Lugo deliver a powerful “Another Day,” with Roger rejecting Mimi’s advances, as she reminds him that there is “no day but today.”

In fact, it was one of Lugo’s stronger vocals in an admittedly inconsistent performance. Less satisfying was “Out Tonight,” with most of the lyrics rendered unintelligible.

Miriam Pultro is in fine voice as Maureen, Mark’s girlfriend, a role that shot Idina Menzel to fame. She makes her appearance rather late in the proceedings — in a shocking pink outfit, with bare midriff — and delivers a satirical song of protest.

Maureen also takes on a new lover, a formidable presence named Joanne, played and sung powerfully by Jade Litaker. In fact, it is Litaker who delivers the evening’s most consistently satisfying performance.

As their on-again, off-again relationship progresses, she and Pultro share a powerhouse duet, “Take Me or Leave Me.”

Not to be overlooked are Jordan Ho, who sings with a limited voice but is loaded with sass and completely embodies the role of Angel, bedecked at times in full drag regalia; Kedrick Faulk as her newfound love, Tom Collins (together they offer a heartfelt “I’ll Cover You”); and Saidu Sinlah, as Benny, the now-wealthy landlord who betrays his friends.

Also to be commended are the members of the ensemble, who enrich many of the numbers, though, surprisingly, the show’s famous anthem, “Seasons of Love,” fails to blow the roof off, as might have been expected.