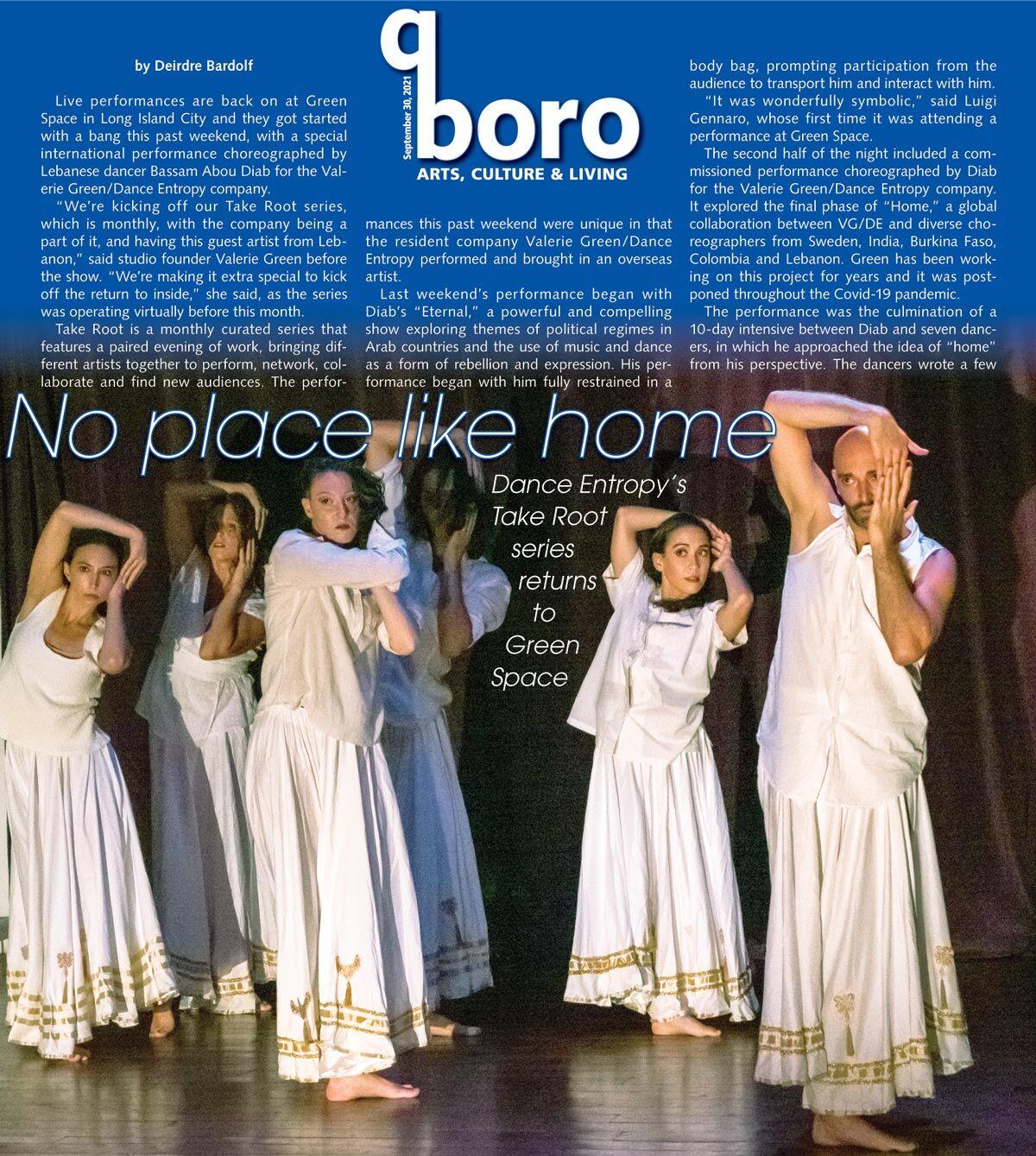 The group performance at Green Space. 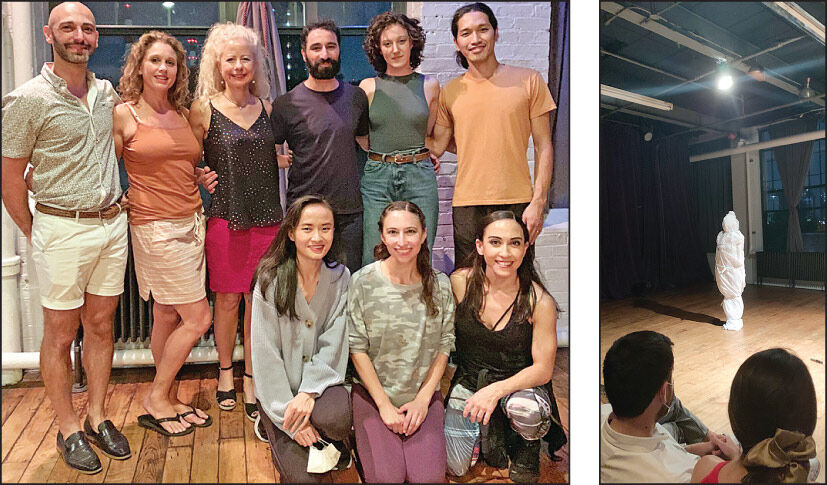 Gathering after their performances at Green Space are, standing, Richard Scandola, left, Kristin Licata, Artistic and Executive Director Valerie Green, Bassam Abou Diab, Sara Pizzi and Fumihiro Kikuchi, and, in front, Karma Chuki, left, Erin Giordano and Whitney Janis. Diab began his solo performance by being dragged onto the floor in a bodybag.

The group performance at Green Space.

Gathering after their performances at Green Space are, standing, Richard Scandola, left, Kristin Licata, Artistic and Executive Director Valerie Green, Bassam Abou Diab, Sara Pizzi and Fumihiro Kikuchi, and, in front, Karma Chuki, left, Erin Giordano and Whitney Janis. Diab began his solo performance by being dragged onto the floor in a bodybag.

Live performances are back on at Green Space in Long Island City and they got started with a bang this past weekend, with a special international performance choreographed by Lebanese dancer Bassam Abou Diab for the Valerie Green/Dance Entropy company.

“We’re kicking off our Take Root series, which is monthly, with the company being a part of it, and having this guest artist from Lebanon,” said studio founder Valerie Green before the show. “We’re making it extra special to kick off the return to inside,” she said, as the series was operating virtually before this month.

Take Root is a monthly curated series that features a paired evening of work, bringing different artists together to perform, network, collaborate and find new audiences. The performances this past weekend were unique in that the resident company Valerie Green/Dance Entropy performed and brought in an overseas artist.

Last weekend’s performance began with Diab’s “Eternal,” a powerful and compelling show exploring themes of political regimes in Arab countries and the use of music and dance as a form of rebellion and expression. His performance began with him fully restrained in a body bag, prompting participation from the audience to transport him and interact with him.

“It was wonderfully symbolic,” said Luigi Gennaro, whose first time it was attending a performance at Green Space.

The second half of the night included a commissioned performance choreographed by Diab for the Valerie Green/Dance Entropy company. It explored the final phase of “Home,” a global collaboration between VG/DE and diverse choreographers from Sweden, India, Burkina Faso, Colombia and Lebanon. Green has been working on this project for years and it was postponed throughout the Covid-19 pandemic.

The performance was the culmination of a 10-day intensive between Diab and seven dancers, in which he approached the idea of “home” from his perspective. The dancers wrote a few words on what the theme meant to them as well, explained Karma Chuki, an artist and dancer from Bhutan.

“It took time to break our walls and get that out from us, and just be OK with our emotions, so I think that brought us closer,” she said.

Diab spoke about his home country of Lebanon with the dancers and taught them about ancient rituals that presented themselves in the dance moves, like a beating of the chest that symbolized beating oneself up with guilt. “This part was the one that dancers really had to dig in and we spoke about what makes us feel guilty,” said Chuki. Dancers dressed in flowing white skirts whirled in synchrony, punctuated by fierce solos that were largely improvised and expressive.

The night wrapped up with a question-and-answer series with the audience and live Lebanese music from Richard Khuzami of Astoria and Maurice Chedid.

“I’m certainly excited, and so is the company,” Green said of finally being back to in-person performances. “We do need to move forward and move on with our lives, move on with providing opportunities and performances, and I’ll do the best I can in this strange time,” she said.

Take Root is planned to continue for one weekend each month through June and takes place on Fridays and Saturdays at 8 p.m.; more information is posted online at greenspacestudio.org.

On Oct. 15 and 16, dancer and choreographer Aya Jane Saotome, through her project “Who Knows,” will debut a live performance as part of the split bill for Take Root, followed by partners Nattie Trogdon and Hollis Bartlett. The upcoming performances will also fit the theme of “Home,” highlighting unique perspectives, culture, politics and identity.