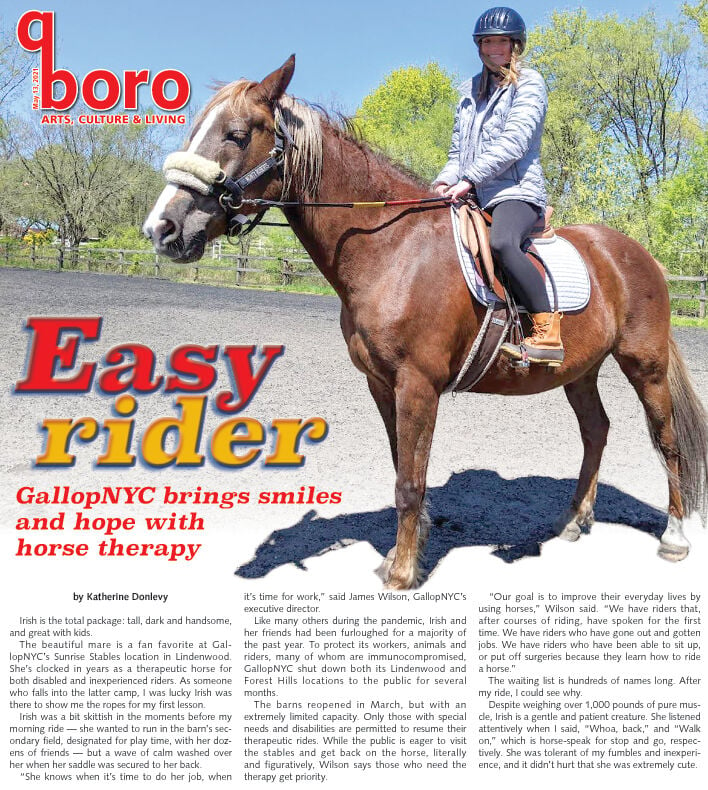 Associate Editor Katherine Donlevy gets a lesson from Irish. 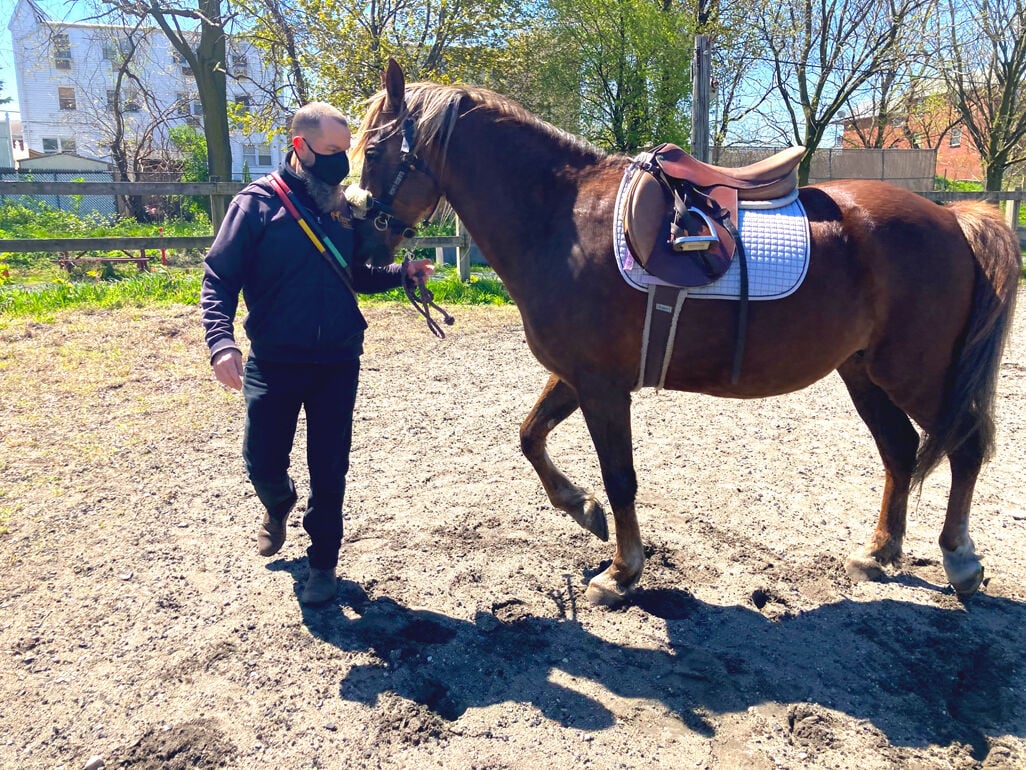 Associate Editor Katherine Donlevy gets a lesson from Irish.

Irish is the total package: tall, dark and handsome, and great with kids.

The beautiful mare is a fan favorite at GallopNYC’s Sunrise Stables location in Lindenwood. She’s clocked in years as a therapeutic horse for both disabled and inexperienced riders. As someone who falls into the latter camp, I was lucky Irish was there to show me the ropes for my first lesson.

Irish was a bit skittish in the moments before my morning ride — she wanted to run in the barn’s secondary field, designated for play time, with her dozens of friends — but a wave of calm washed over her when her saddle was secured to her back.

Like many others during the pandemic, Irish and her friends had been furloughed for a majority of the past year. To protect its workers, animals and riders, many of whom are immunocompromised, GallopNYC shut down both its Lindenwood and Forest Hills locations to the public for several months.

The barns reopened in March, but with an extremely limited capacity. Only those with special needs and disabilities are permitted to resume their therapeutic rides. While the public is eager to visit the stables and get back on the horse, literally and figuratively, Wilson says those who need the therapy get priority.

The waiting list is hundreds of names long. After my ride, I could see why.

Despite weighing over 1,000 pounds of pure muscle, Irish is a gentle and patient creature. She listened attentively when I said, “Whoa, back,” and “Walk on,” which is horse-speak for stop and go, respectively. She was tolerant of my fumbles and inexperience, and it didn’t hurt that she was extremely cute.

Irish was also exceptionally clued-in to my own movements. Wilson explained that horses are trained to follow their riders’ physical direction so closely that no words need to be spoken. For example, Irish knew to make a right turn if I shifted my shoulders and head to face my right. She knew to stop if I squeezed my heels against her belly and softly tugged her reins in a drawn-out rowing motion. Her attentiveness to my physical presence forced me to be acutely aware of my own body in the most serene and tranquil way.

“Being with a horse is calming and improves people’s well-being,” Wilson explained.

Horseback riding offers people the chance to get physically fit. Riders need a strong abdomen to sit properly on a horse’s back and strong thighs to stay upright. You also need decently strong arms to walk alongside a horse holding onto their reins and keeping them from straying off the path.

The therapy doesn’t end with the ride, however. Wilson explained the motor skills exercise patrons benefit from as they untack the horse, meaning to remove the saddle and other riding tools.

The saddle has multiple buckles, which are harder to loosen then they appear to be. For someone with difficulty controlling their phalanges or with weak hands, the exercise is great practice. Next comes brushing the horse’s coat to smooth out the hairs imprinted by the saddle, which is often the horse’s favorite part of the process.

Finally — and under the close watch of a professional — is picking the hooves. Dirt from the pasture accumulates during the ride and needs to be pulled out to avoid injuries to the animal. After watching Wilson exemplify the job, I softly picked up Irish’s hoof and scraped out the mud with a pick. Irish once again proved to be a gentle giant and made a scary task seem easy.

Though not everyone can grab the reins again at this time, GallopNYC is offering the public volunteer opportunities, day-visit options and other resources in the weeks leading up to its full reopening.

For more information, or to plan your own visit, check out gallopnyc.org.