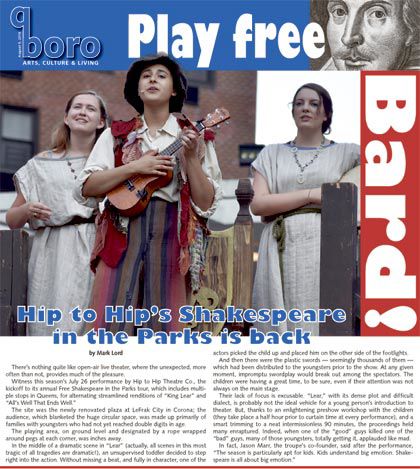 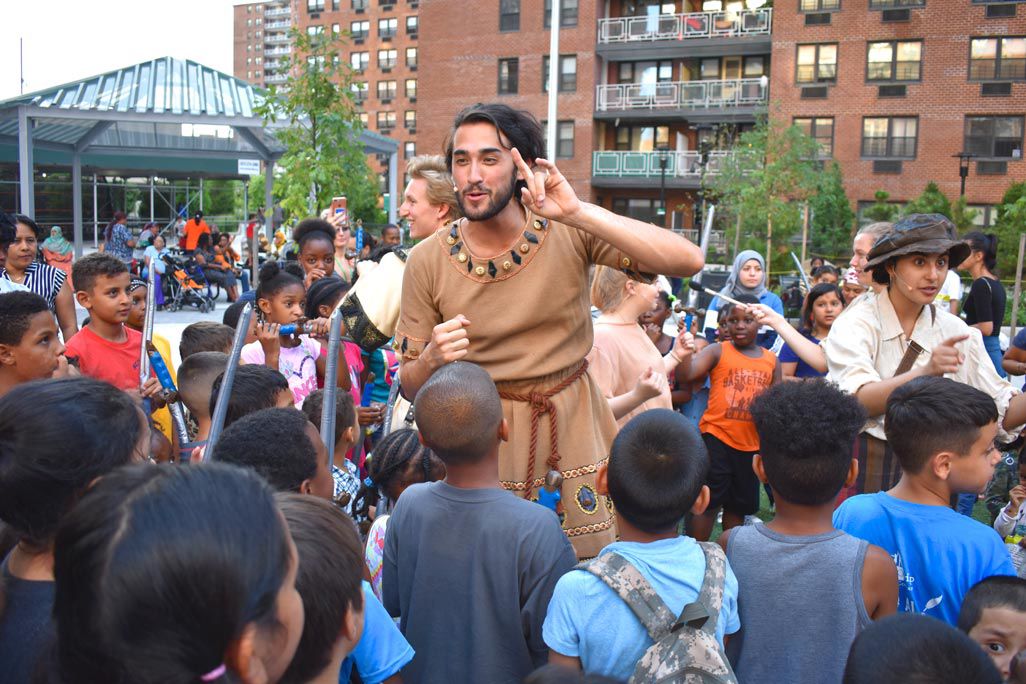 Akoni Steinmann, center, Josh Miccio and Sofia Dobrushin interact with the children during the workshop that precedes each show. On the cover: Kelsey Robins, left, as a musician, Dobrushin as the Fool and Molly Van der Molen as a musician. 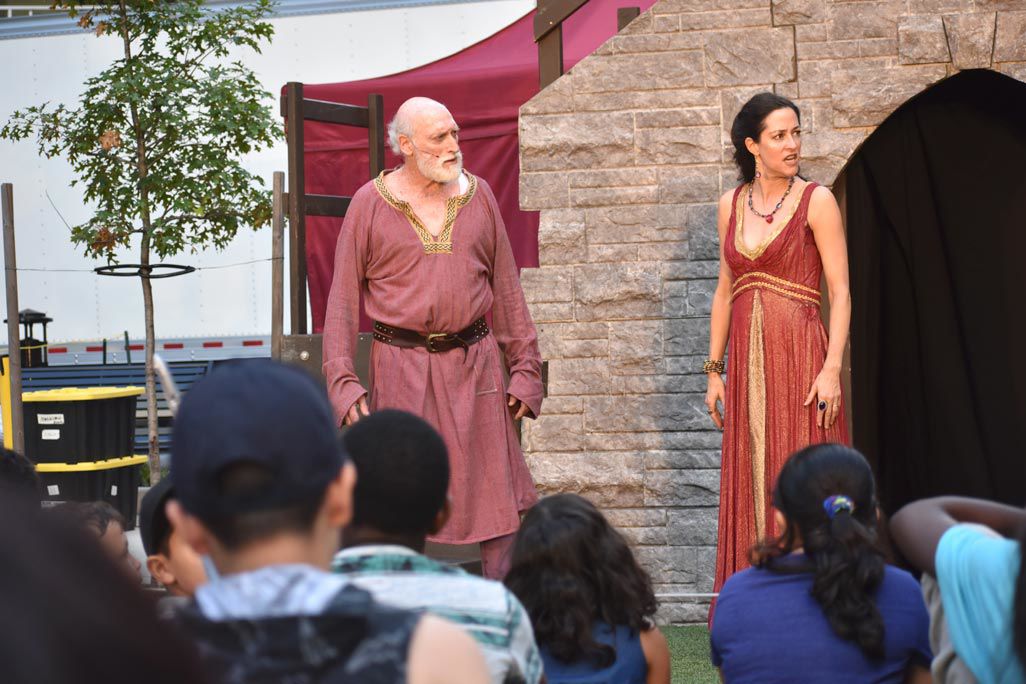 Joel Leffert, as King Lear and Joy Marr as his eldest daughter.

Akoni Steinmann, center, Josh Miccio and Sofia Dobrushin interact with the children during the workshop that precedes each show. On the cover: Kelsey Robins, left, as a musician, Dobrushin as the Fool and Molly Van der Molen as a musician.

Joel Leffert, as King Lear and Joy Marr as his eldest daughter.

There’s nothing quite like open-air live theater, where the unexpected, more often than not, provides much of the pleasure.

Witness this season’s July 26 performance by Hip to Hip Theatre Co., the kickoff to its annual Free Shakespeare in the Parks tour, which includes multiple stops in Queens, for alternating streamlined renditions of “King Lear” and “All’s Well That Ends Well.”

The site was the newly renovated plaza at LeFrak City in Corona; the audience, which blanketed the huge circular space, was made up primarily of families with youngsters who had not yet reached double digits in age.

The playing area, on ground level and designated by a rope wrapped around pegs at each corner, was inches away.

In the middle of a dramatic scene in “Lear” (actually, all scenes in this most tragic of all tragedies are dramatic!), an unsupervised toddler decided to step right into the action. Without missing a beat, and fully in character, one of the actors picked the child up and placed him on the other side of the footlights.

And then there were the plastic swords — seemingly thousands of them — which had been distributed to the youngsters prior to the show. At any given moment, impromptu swordplay would break out among the spectators. The children were having a great time, to be sure, even if their attention was not always on the main stage.

Their lack of focus is excusable. “Lear,” with its dense plot and difficult dialect, is probably not the ideal vehicle for a young person’s introduction to theater. But, thanks to an enlightening preshow workshop with the children (they take place a half hour prior to curtain time at every performance), and a smart trimming to a neat intermissionless 90 minutes, the proceedings held many enraptured. Indeed, when one of the “good” guys killed one of the “bad” guys, many of those youngsters, totally getting it, applauded like mad.

In fact, Jason Marr, the troupe’s co-founder, said after the performance, “The season is particularly apt for kids. Kids understand big emotion. Shakespeare is all about big emotion.”

Marr was pleased with the crowd’s response. “Our mission is to take theater into public spaces to build and sustain the audiences of tomorrow,” he said.

The performance itself, fully staged and costumed, was meticulously directed by Marr and acted with conviction by a company of dedicated players, many of them Hip to Hip regulars.

As the central figure, Joel Leffert delivered a nuanced portrayal, depicting Lear’s evolution and ultimate descent into madness. Totally drained by the role’s demands, he admitted afterward that the just-concluded performance was “a challenge,” saying, “These guys aren’t used to us. They were a little noisier than we’d like to see.”

But none of that seemed to matter. He was given strong support by every member of the company, including Joy Marr, Kathleen Denecke and Taylor Harris-Butler as Lear’s three daughters; Kurt Kingsley as his friend, the Earl of Kent; Tristan Land and Brian Demar Jones as his sons-in-law; Colin Wulff as Edgar, the loyal son of one of Lear’s noblemen; and, in a reversal of Shakespearean tradition, three of the women playing male roles, Sofia Dobrushin (Lear’s attendant Fool), Elisabeth S. Rodgers (the Earl of Gloucester), and Natalia Cuevas (Gloucester’s treacherous illegitimate younger son, Edmund).

Many of the same actors will appear in “All’s Well,” under the direction of Owen Thompson. A much lighter piece, it focuses on heroine Helena (Joy Marr), who is driven to achieve seemingly impossible goals — a feminist ahead of her time, some might say.

For specific locations and times and other information, visit hiptohip.org.