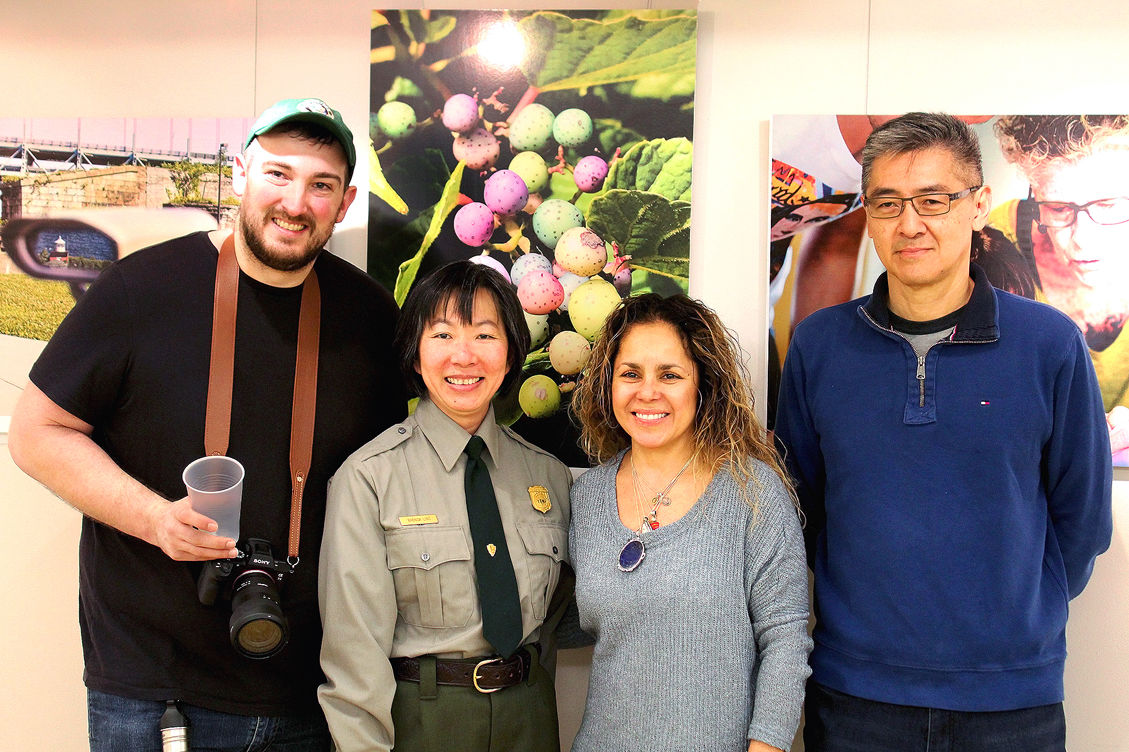 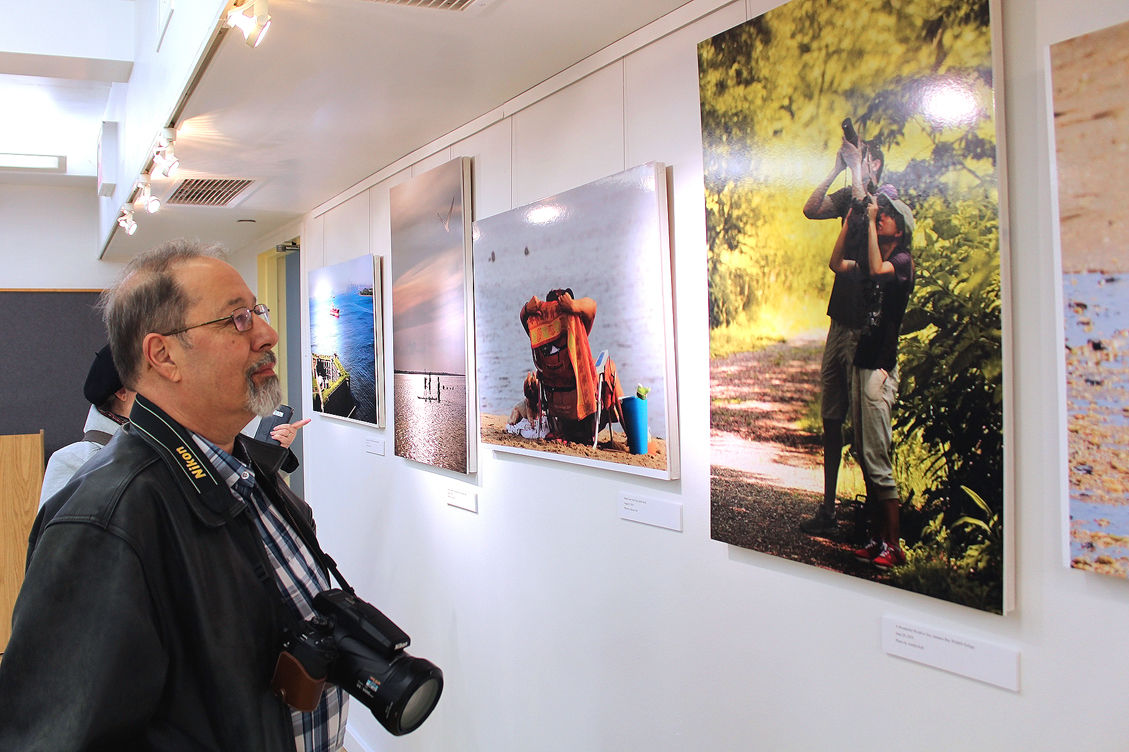 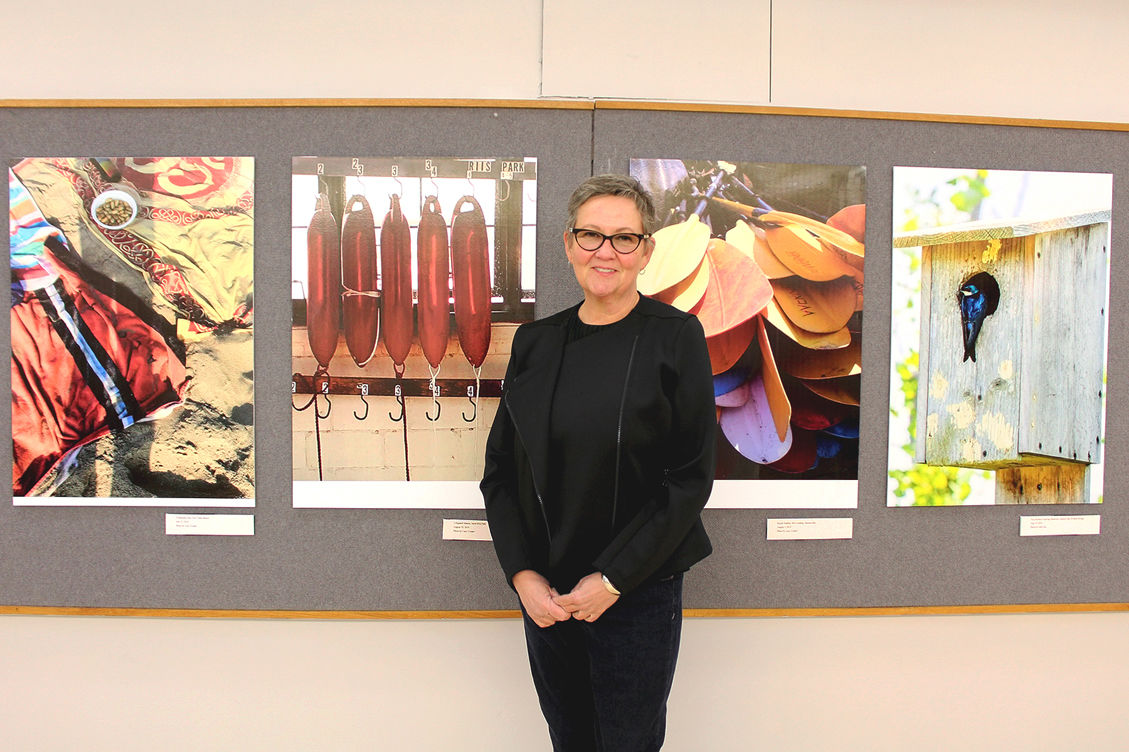 Lucy Cooper stands in front of her photos at the “Exploring Gateway” exhibit in Broad Channel.

Lucy Cooper stands in front of her photos at the “Exploring Gateway” exhibit in Broad Channel.

Park Ranger Charles Markis, program manager for arts and culture at Gateway National Recreation Area, is responsible for its publications and exhibits. His mission is to tell the story of the park, especially to engage young people, about its history, culture and the animals.

A recent Sunday marked the opening reception for “Exploring Gateway,” an exhibit at the Jamaica Bay Wildlife Refuge Center that invited nine photographers to capture “locations, worlds and points of time” at the park. Markis, a photography enthusiast himself, takes daily walks to photograph a bridge in its various lights and colors. Assisted by Park Ranger Brenda Ling, a public affairs officer, he also organizes five or six programs at the center per year.

Several of the featured artists were in attendance to greet guests and discuss their work. Among them was Jeff Mondlock of Staten Island. He grew up in Chicago, where at an early age he became an avid birder. He then moved to Tennessee as a broadcast news journalist for Great Smoky Mountains National Park, often hiking in Knoxville and developing an appreciation of nature. For five years he has lived in New York City, and he combines his love of nature with his photography. Fort Wadsworth on Staten Island has become a favorite subject for his photographs.

Two other photographers at the opening reception are from Queens: Lucy Cooper of Middle Village and John Eng of Forest Hills.

Cooper is a graphic designer and is passionate about photography as a pastime. She has lived in Middle Village since 2000. She spends free time walking in the neighborhood, Andy’s Deli being a favorite stop. She enjoys visiting the Jamaica Bay Wildlife Refuge; with an eye for patterns, color and composition she captures images of whatever of interest crosses her lens.

John Eng was born in upstate New York but has been a city dweller since he was a year old. Asked if he was first a birder or a naturalist, he quickly replied, “Birder first, nature second.” He explained that birds are the big draw to Gateway, and a newcomer can then get a better idea of all else that the park has to offer. What he likes best about photographing nature is that “you don’t need permission ... you can practice a lot without intruding on anyone.” Having my own personal experience with the difficulty of capturing images of birds in flight, I asked John if he had any secrets. His answer: patience, a lot of patience. You must be willing to wait and then rely on a camera that permits a quick sequence of shots. Then perhaps you can get one photo that you’re happy with.

Among the guests in attendance, I spoke with Alex and Betty Jean Spielberg. They often visit the Jamaica Bay Wildlife Refuge. Alex, a photography buff himself, said he’s been taking photographs since he was 14 years old. He and Betty Jean are instilling that love of photography in their daughter, who won an award from Channel 13 for her videography.

This free exhibit will run for two months. Come and explore.