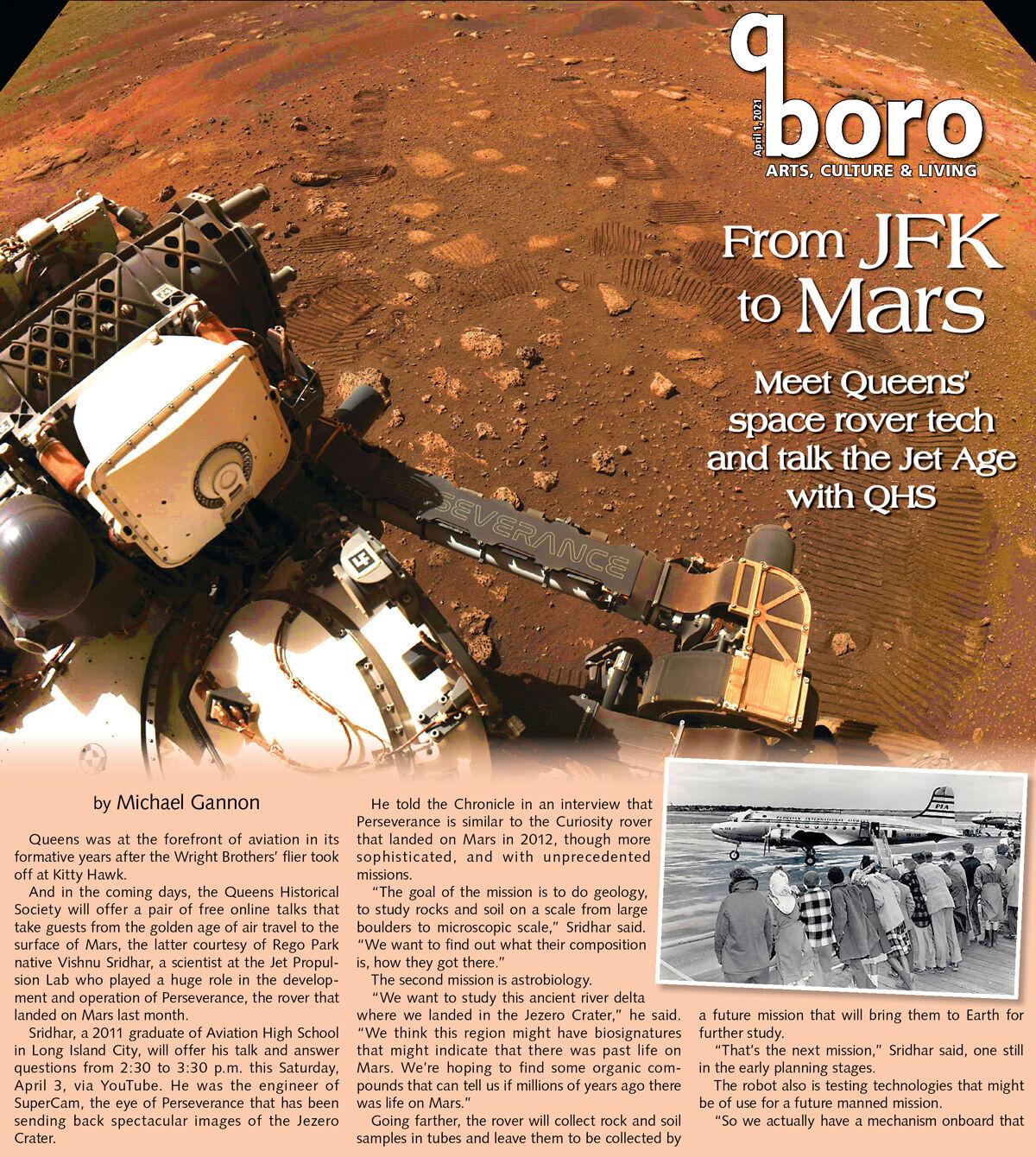 Perseverance works its way across the Martian landscape; and a DC-4 from Peru becomes the first international flight to land at Idlewild Airport. 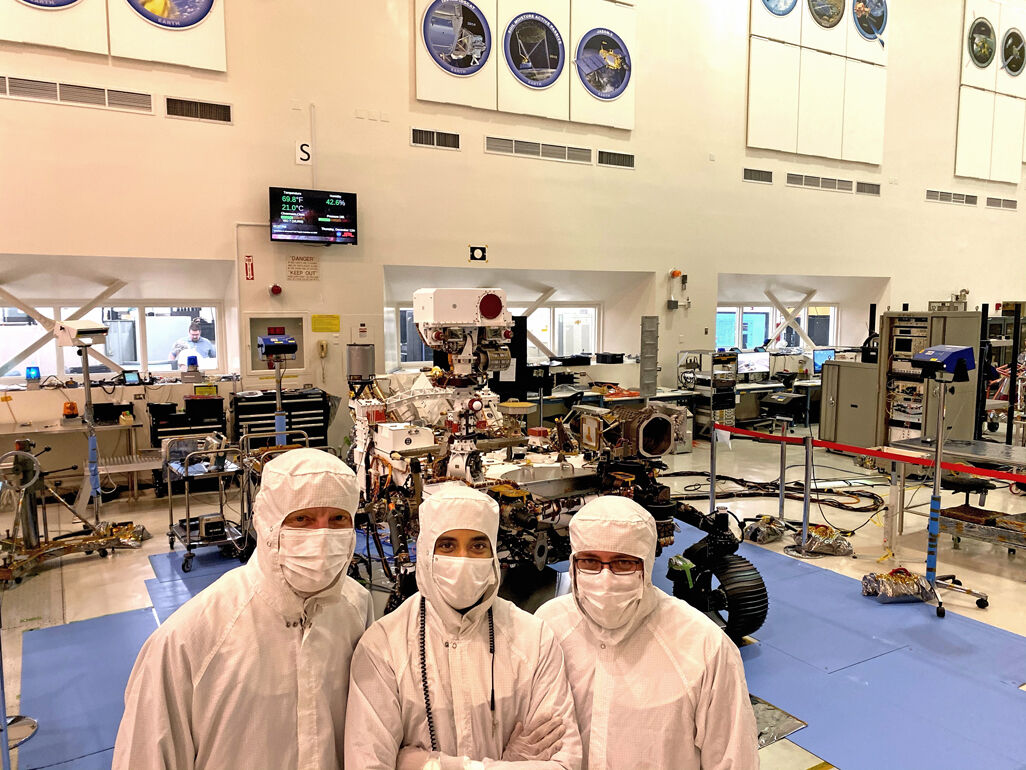 Rego Park’s own Vishnu Sridhar, center, in front of the Perseverance rover that has been exploring Mars since February.

Perseverance works its way across the Martian landscape; and a DC-4 from Peru becomes the first international flight to land at Idlewild Airport.

Rego Park’s own Vishnu Sridhar, center, in front of the Perseverance rover that has been exploring Mars since February.

Queens was at the forefront of aviation in its formative years after the Wright Brothers’ flier took off at Kitty Hawk.

And in the coming days, the Queens Historical Society will offer a pair of free online talks that take guests from the golden age of air travel to the surface of Mars, the latter courtesy of Rego Park native Vishnu Sridhar, a scientist at the Jet Propulsion Lab who played a huge role in the development and operation of Perseverance, the rover that landed on Mars last month.

Sridhar, a 2011 graduate of Aviation High School in Long Island City, will offer his talk and answer questions from 2:30 to 3:30 p.m. this Saturday, April 3, via YouTube. He was the engineer of SuperCam, the eye of Perseverance that has been sending back spectacular images of the Jezero Crater.

He told the Chronicle in an interview that Perseverance is similar to the Curiosity rover that landed on Mars in 2012, though more sophisticated, and with unprecedented missions.

“The goal of the mission is to do geology, to study rocks and soil on a scale from large boulders to microscopic scale,” Sridhar said. “We want to find out what their composition is, how they got there.”

The second mission is astrobiology.

“We want to study this ancient river delta where we landed in the Jezero Crater,” he said. “We think this region might have biosignatures that might indicate that there was past life on Mars. We’re hoping to find some organic compounds that can tell us if millions of years ago there was life on Mars.”

Going farther, the rover will collect rock and soil samples in tubes and leave them to be collected by a future mission that will bring them to Earth for further study.

“That’s the next mission,” Sridhar said, one still in the early planning stages.

The robot also is testing technologies that might be of use for a future manned mission.

“So we actually have a mechanism onboard that produces oxygen out of the Martian atmosphere.”

It also has microphones.

“It was really exciting ... I’m one of the first few humans to listen to sounds from the surface of Mars.”

Guests can submit questions for Sridhar and RSVP online at queenshistoricalsociety.org.

The second talk, “Air Fair & Queens History of the Jet Age,” features Jeran Halfpap, the society’s education and outreach coordinator. He will focus on the traveling public’s experience in the 1960s and 1970s; the influence of technology; and the “modern” terminals that kept springing up, such as the Eero Saarinen-designed TWA terminal.

“Queens used to have six airfields,” Halfpap said, referring to the World War I-era Navy base on the Rockaway Peninsula on the site of Jacob Riis Park; Flushing Airport, also known as Speed’s Airport, which still has remnants of its runways and taxiways visible from the air; Holmes, or Grand Central Airport; and North Beach or Glenn H. Curtiss Airport, along with LaGuardia and John F. Kennedy International, previously Idlewild Airport.

“I don’t like flying, but I’m interested in the experience people had when flying, and the architecture over the years at the airports,” Halfpap said.

The QHS educator said he has long been fascinated by aviation, and that his research, begun back in December, introduced him to a wealth of material maintained by historians and hobbyists

Halfpap is inviting people who traveled to and from LaGuardia and JFK in the 1960s and 1970s to submit their stories and reminiscences on the society’s website. They can RSVP as well.

Both events are free but the Historical Society will accept donations online.