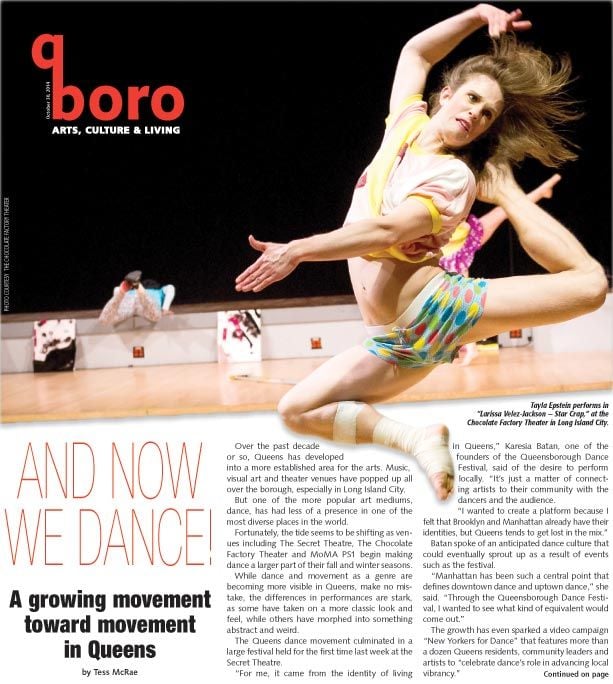 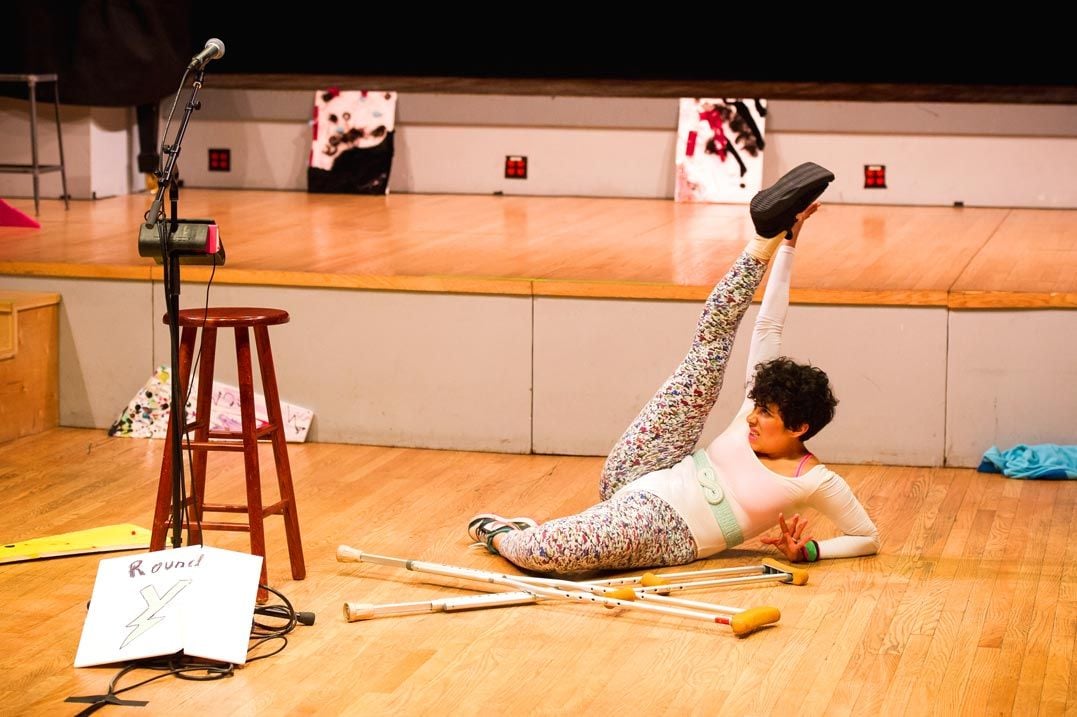 Larissa Velez-Jackson in her piece “Star Crap.” The performance, coming to the Chocolate Factory Theater next week, is just one example of the growing presence of dance throughout communities in Queens.

Larissa Velez-Jackson in her piece “Star Crap.” The performance, coming to the Chocolate Factory Theater next week, is just one example of the growing presence of dance throughout communities in Queens.

Over the past decade or so, Queens has developed into a more established area for the arts. Music, visual art and theater venues have popped up all over the borough, especially in Long Island City.

But one of the more popular art mediums, dance, has had less of a presence in one of the most diverse places in the world.

Fortunately, the tide seems to be shifting as venues including The Secret Theatre, The Chocolate Factory Theater and MoMA PS1 begin making dance a larger part of their fall and winter seasons.

While dance and movement as a genre are becoming more visible in Queens, make no mistake, the differences in performances are stark, as some have taken on a more classic look and feel, while others have morphed into something abstract and weird.

The Queens dance movement culminated in a large festival held for the first time last week at the Secret Theatre.

“For me, it came from the identity of living in Queens,” Karesia Batan, one of the founders of the Queensborough Dance Festival, said of the desire to perform locally. “It’s just a matter of connecting artists to their community with the dancers and the audience.

“I wanted to create a platform because I felt that Brooklyn and Manhattan already have their identities, but Queens tends to get lost in the mix.”

Batan spoke of an anticipated dance culture that could eventually sprout up as a result of events such as the festival.

“Manhattan has been such a central point that defines downtown dance and uptown dance,” she said. “Through the Queensborough Dance Festival, I wanted to see what kind of equivalent would come out.”

The growth has even sparked a video campaign “New Yorkers for Dance” that features more than a dozen Queens residents, community leaders and artists to “celebrate dance’s role in advancing local vibrancy.”

The series of videos are available at DanceNYC.org or at the Dance/NYC YouTube channel.

Though an identity is sought for the Queens dance community, the medium is not something that can be so easily pinned down.

Like many art forms, dance can be broken up into dozens of subgenres that treat movement in a different way and attract very different audiences.

Coming up at the Chocolate Factory Theater is a performance that aims to break the rules and step over boundary lines.

“Larissa Velez-Jackson — Star Crap Method” is a compositional methodology that redefines the skill set of a contemporary dancer.

The three performers — Tyler Ashley, Talya Epstein and Larissa Velez-Jackson — compose the performance in the moment, including the accompanying sound.

While improvisation is risky for any live performance, it can make for a magical experience if done well.

“Be prepared to be seriously entertained and simultaneously provoked to rethink what a dancer is expected to deliver on stage,” Velez-Jackson said of “Star Crap.” “With dancers I work to conjure our movement brilliance as well as our technical ineptitudes, not quantifying one over the other.

“We swing between being the divas and underdogs of form. This creates an altogether new skill set.”

“Star Crap” — a tongue-in-cheek way to describe the narcissism that comes with performing — opens on Nov. 4 and runs through Nov. 8. Performances begin at 8 p.m.

Visit chocolatefactorytheater.org for tickets and information.

“When I first came here, I saw a lot of visual art, but I also saw the potential for an artist like myself to increase their visibility here,” Batan said of the Long Island City community.

The influence of the more established visual arts community in Long Island City is very much present in many dance programs in Queens.

One such program is “Retrospective” by Xavier Le Roy at MoMA PS1.

The program is the inaugural U.S. museum survey of Le Roy, himself.

Throughout the day, a handful of performers explore, recycle and transform the choreographer’s past solo work and break the traditional fourth wall by encouraging interaction with the performers.

The piece leaves the realm of dance and becomes a hybrid of performance and visual art.

More information on “Retrospective” is available at momaps1.org.