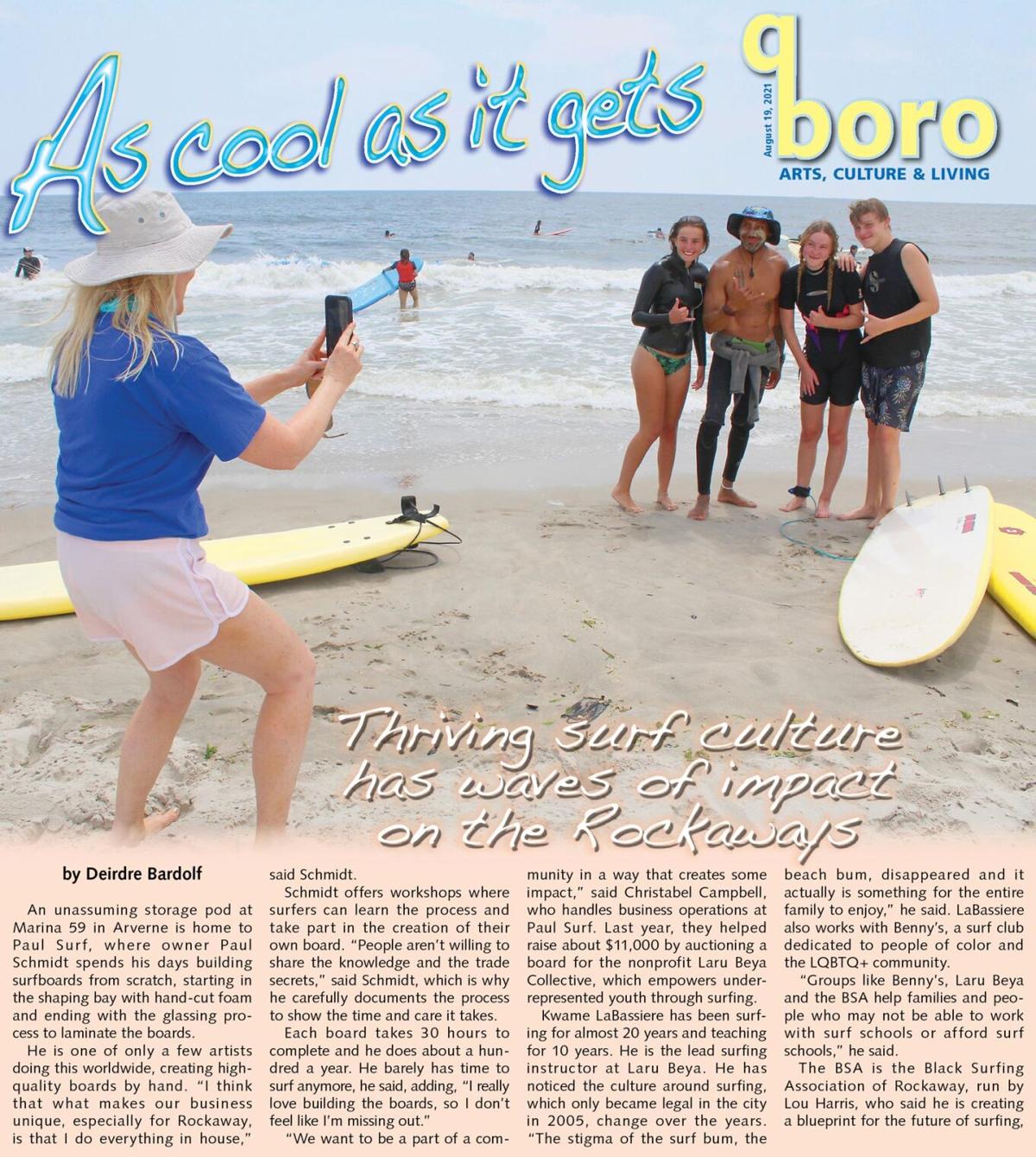 Molly, left, Lily and Cody Nylund join surf instructor Kwame LaBassiere, in hat, for a photo by their mother, Sandra, who grew up in the Rockaways. 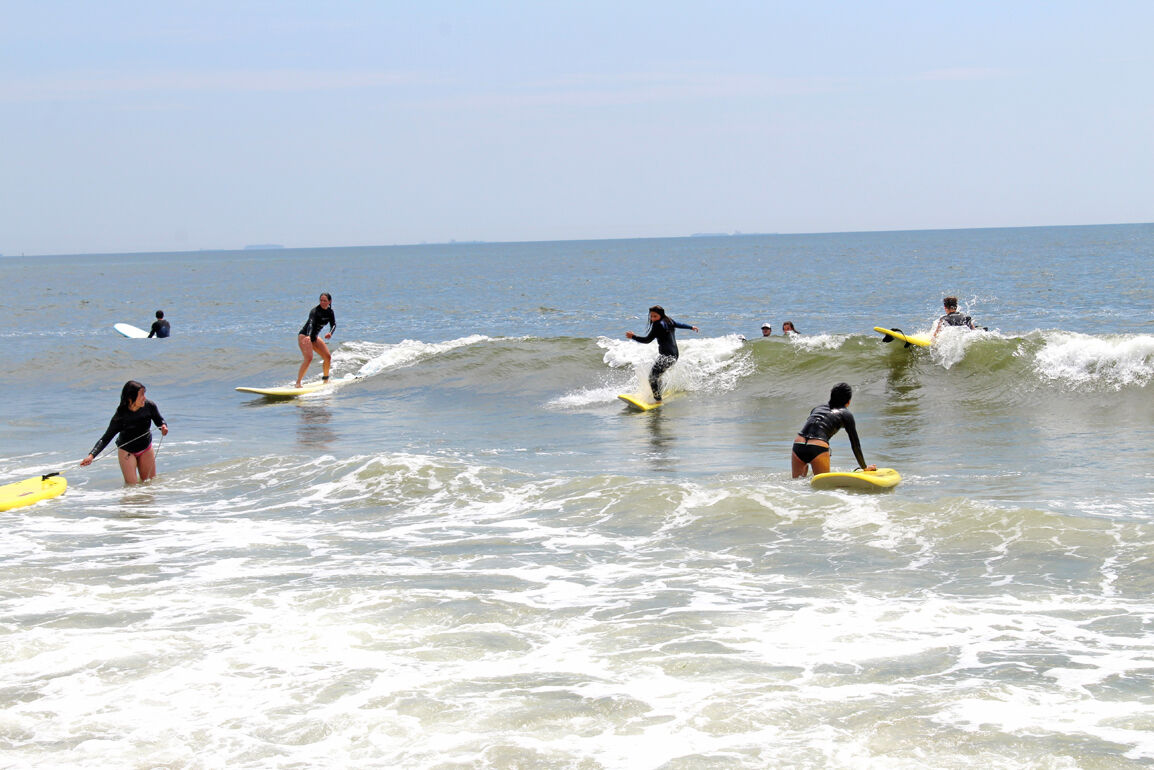 Students of the New York Surf School put their skills to use. 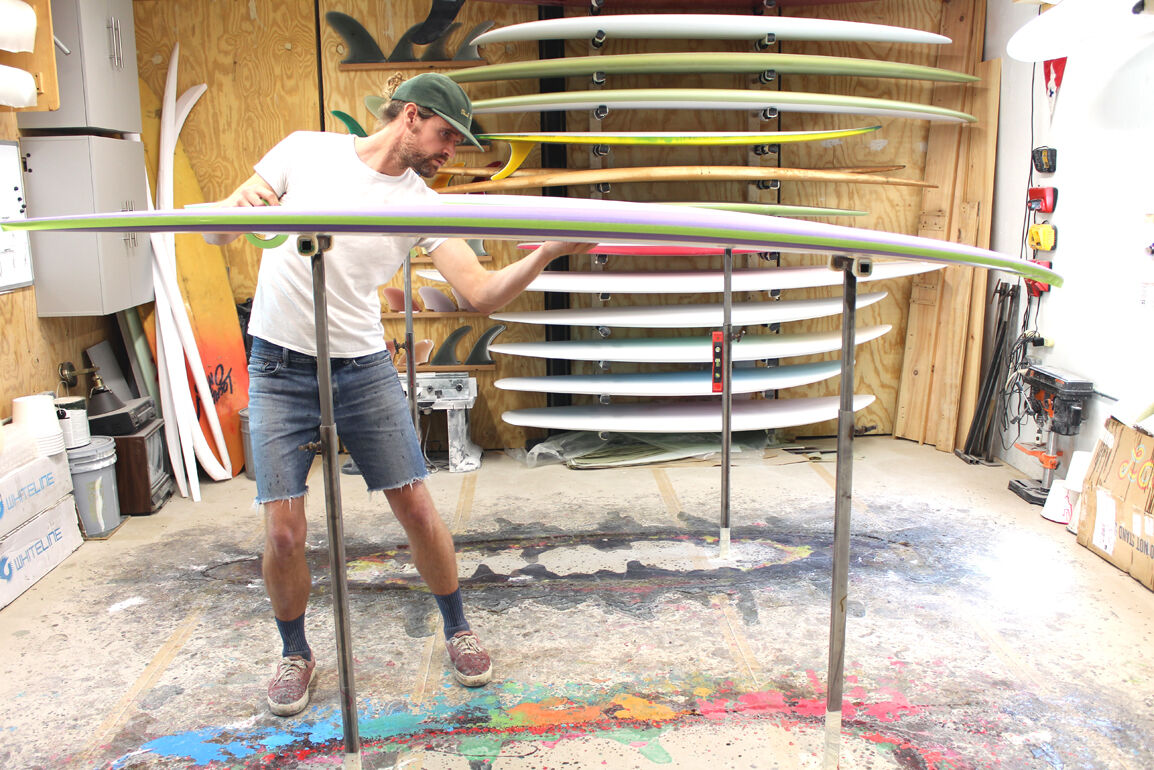 Molly, left, Lily and Cody Nylund join surf instructor Kwame LaBassiere, in hat, for a photo by their mother, Sandra, who grew up in the Rockaways.

Students of the New York Surf School put their skills to use.

An unassuming storage pod at Marina 59 in Arverne is home to Paul Surf, where owner Paul Schmidt spends his days building surfboards from scratch, starting in the shaping bay with hand-cut foam and ending with the glassing process to laminate the boards.

He is one of only a few artists doing this worldwide, creating high-quality boards by hand. “I think that what makes our business unique, especially for Rockaway, is that I do everything in house,” said Schmidt.

Schmidt offers workshops where surfers can learn the process and take part in the creation of their own board. “People aren’t willing to share the knowledge and the trade secrets,” said Schmidt, which is why he carefully documents the process to show the time and care it takes.

Each board takes 30 hours to complete and he does about a hundred a year. He barely has time to surf anymore, he said. “I really love building the boards, so I don’t feel like I’m missing out,” he said.

“We want to be a part of a community in a way that creates some impact,” said Christabel Campbell, who handles business operations at Paul Surf. Last year, they helped raise about $11,000 by auctioning a board for the nonprofit Laru Beya Collective, which empowers underrepresented youth through surfing.

Kwame LaBassiere has been surfing for almost 20 years and teaching for 10 years. He is the lead surfing instructor at Laru Beya. He has noticed the culture around surfing, which only became legal in the city in 2005, change over the years. “The stigma of the surf bum, the beach bum, disappeared and it actually is something for the entire family to enjoy,” he said. LaBassiere also works with Benny’s, a surf club dedicated to people of color and the LQBTQ+ community.

“Groups like Benny’s, Laru Beya and the BSA help families and people who may not be able to work with surf schools or afford surf schools,” he said.

The BSA is the Black Surfing Association of Rockaway, run by Lou Harris, who said he is creating a blueprint for the future of surfing, one that empowers kids and keeps them occupied. The BSA offers free surfing, swimming, skateboarding and cooking classes.

“What I’ve done here has never been done really: free surf lessons, skate lessons, giving out free wetsuits, sneakers, surfboards,” said Harris. He has built a vast network of sponsors including Vans, which supplies the sneakers. This summer, he has given surfing lessons to a diverse group of kids, one of whom comes all the way from the Bronx. “It’s a beautiful thing,” said Harris.

In September, he is hosting a surf contest with the NYPD’s 100th Precinct. “It’s going to be fun and also bring the kids and the cops together, who doesn’t want that?”

LaBassiere says there are great companies and organizations around the Rockaways that people do not know about. “There’s the grittiness of Rockaway but there’s also beauty in that grittiness,” he said.

Greg Angert, a surfing instructor at New York Surf School, said the summers since Covid have been some of the busiest he has seen. “These last couple of years have been extremely busy with parents trying to get kids out of the house. And even lots of adults. I’ve had Wall Street guys coming for lessons,” said Angert. It feels like the Rockaways are “coming back to life,” he said.

Sandra Nylund grew up in the Rockaways but raised her four teenaged kids in England. She brought them to her hometown to visit their grandparents and they surfed for the first time at the New York Surf School, getting a lesson from LaBassiere last weekend.

“This was by far the highlight of the summer,” she said. She said that the town was looking like what she remembered growing up. “My dad always said, ‘Who’s got it better than us, living next to the beach?’”