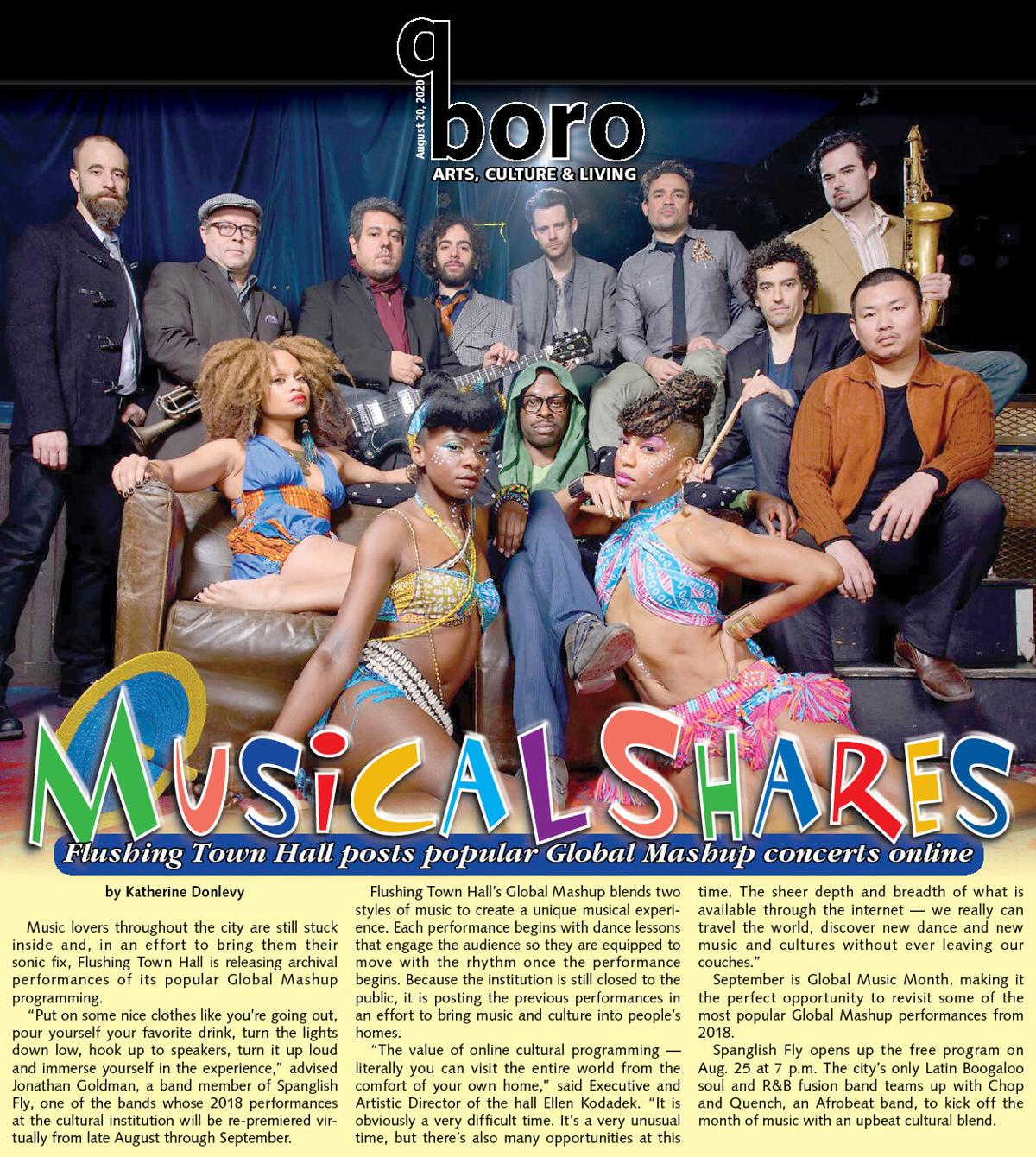 On the cover: Chop and Quench, an Afrobeat band, teams up with Spanglish Fly to kick off the 2018 revival schedule. 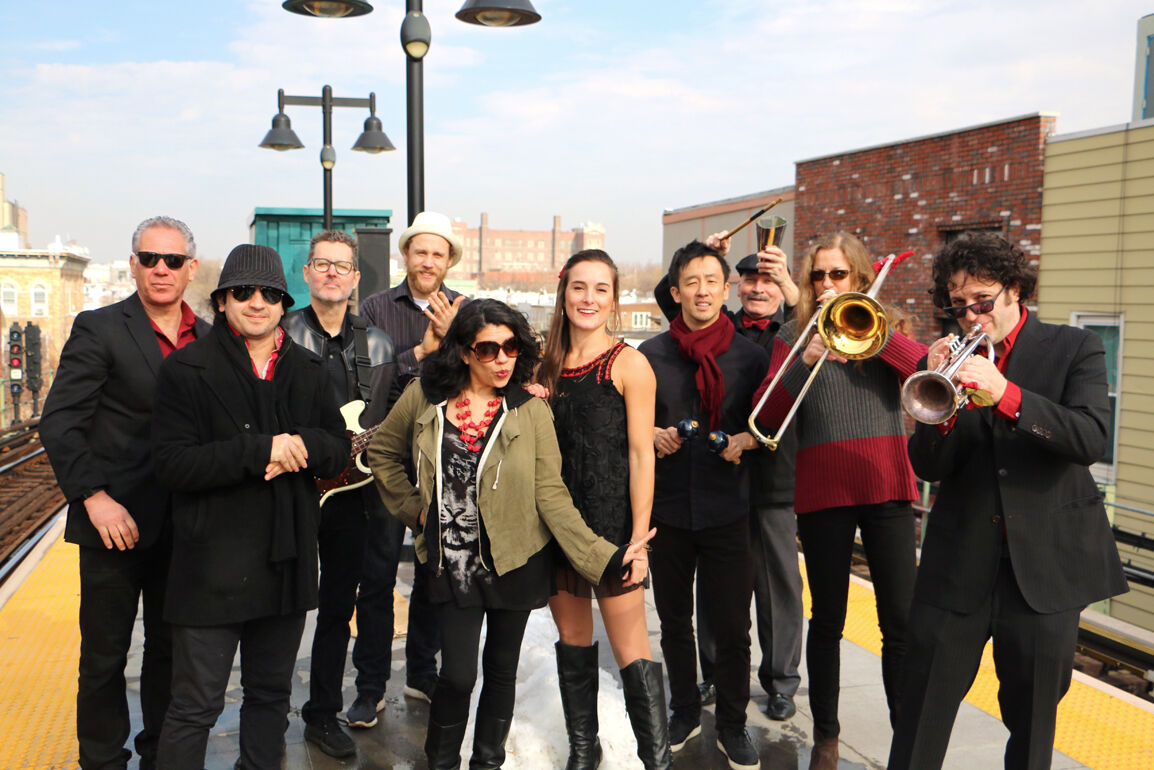 Spanglish Fly is one of the many bands featured in Flushing Town Hall’s virtual Global Mashup programming.

On the cover: Chop and Quench, an Afrobeat band, teams up with Spanglish Fly to kick off the 2018 revival schedule.

Spanglish Fly is one of the many bands featured in Flushing Town Hall’s virtual Global Mashup programming.

Music lovers throughout the city are still stuck inside and, in an effort to bring them their sonic fix, Flushing Town Hall is releasing archival performances of its popular Global Mashup programming.

“Put on some nice clothes like you’re going out, pour yourself your favorite drink, turn the lights down low, hook up to speakers, turn it up loud and immerse yourself in the experience,” advised Jonathan Goldman, a band member of Spanglish Fly, one of the bands whose 2018 performances at the cultural institution will be re-premiered virtually from late August through September.

Flushing Town Hall’s Global Mashup blends two styles of music to create a unique musical experience. Each performance begins with dance lessons that engage the audience so they are equipped to move with the rhythm once the performance begins. Because the institution is still closed to the public, it is posting the previous performances in an effort to bring music and culture into people’s homes.

“The value of online cultural programming — literally you can visit the entire world from the comfort of your own home,” said Executive and Artistic Director of the hall Ellen Kodadek. “It is obviously a very difficult time. It’s a very unusual time, but there’s also many opportunities at this time. The sheer depth and breadth of what is available through the internet — we really can travel the world, discover new dance and new music and cultures without ever leaving our couches.”

September is Global Music Month, making it the perfect opportunity to revisit some of the most popular Global Mashup performances from 2018.

Spanglish Fly opens up the free program on Aug. 25 at 7 p.m. The city’s only Latin Boogaloo soul and R&B fusion band teams up with Chop and Quench, an Afrobeat band, to kick off the month of music with an upbeat cultural blend.

“As with every time when global mashups have both bands on stage, the audience feeds off the joy that the bands share together,” said Goldman reminiscing on the two-year-old performance. “This is one of the successes of the series. It can be so much fun for the musicians, and the audience recognizes that joy. The happiness goes out off the stage and into the audience.”

Spanglish Fly is the only band to appear twice in the lineup, returning on Sept. 15 with Balkan wedding music group Raya Brass Band. Other mashups the audiences look forward to include Egypt Meets Haiti, Mexico Meets Guinea and Texas Meets Peru.

“Two different bands in the same room together — it’s not a surprise to anyone that they get up and have fun together, and it’s fun to see,” Goldman continued. “When you see people from different spheres of life, different backgrounds, different styles of music and dancing to it, it’s natural that there’s a certain education going on and it’s a reminder of how music brings people together.”

Though Goldman admitted there is no substitute for a live performance, he admired the accessibility that the virtual programming offers — because it is streamed each Tuesday via YouTube, anyone in the city, across the country and even throughout the world can tune in to enjoy the performances that had previously been limited to who could grab a ticket.

“We’re all struggling to make connections right now,” he said. “What people are looking for reminders of is what is still out there and when they tune in they’re all instantly forming a connection ... It’s not the same on the screen but the purpose is to let people know this is what human society is all about and what it will be like once again.”

Kodadek shared this sentiment, noting that for some the experience might be preferable. “We’re not going to have 200 people dancing together in the theater, but in the privacy and comfort of their own home,” she said.