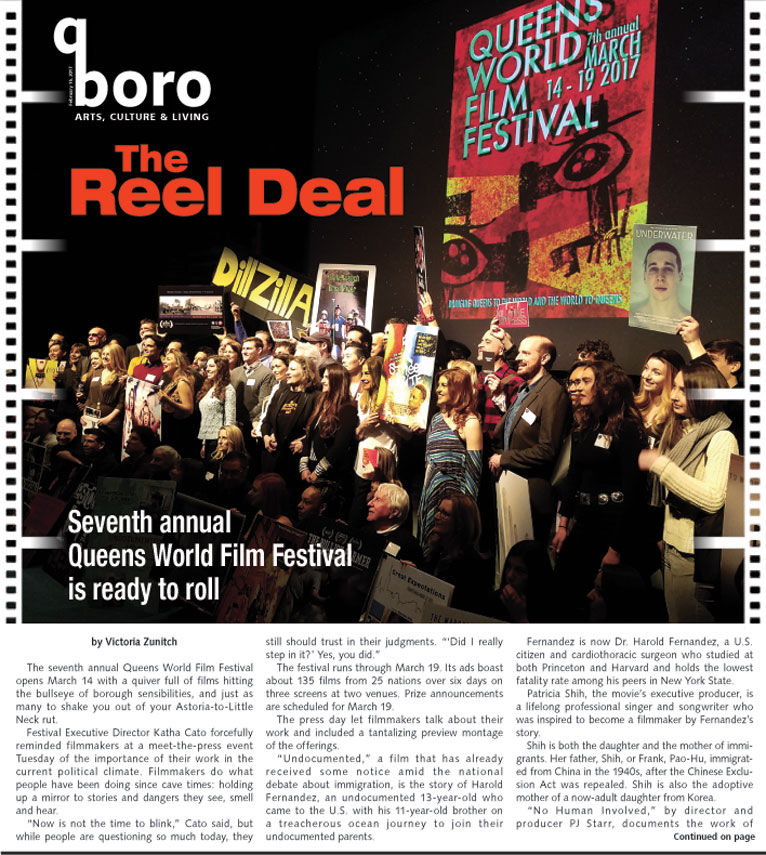 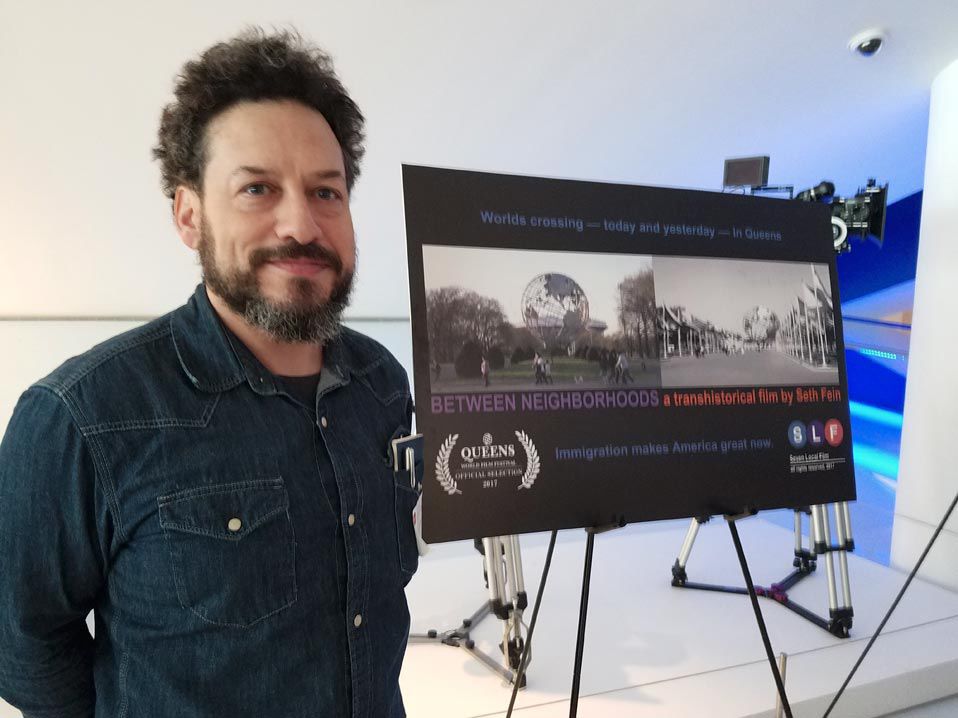 Seth Fein’s film “Between Neighborhoods” is all about Queens, while “Dillzilla: Titan of Terror!” spoofs the 1950s horror genre. On the cover: The filmmakers and festival Executive Director Katha Cato, center left, all in black, promote the festival.

Seth Fein’s film “Between Neighborhoods” is all about Queens, while “Dillzilla: Titan of Terror!” spoofs the 1950s horror genre. On the cover: The filmmakers and festival Executive Director Katha Cato, center left, all in black, promote the festival.

The seventh annual Queens World Film Festival opens March 14 with a quiver full of films hitting the bullseye of borough sensibilities, and just as many to shake you out of your Astoria-to-Little Neck rut.

Festival Executive Director Katha Cato forcefully reminded filmmakers at a meet-the-press event Tuesday of the importance of their work in the current political climate. Filmmakers do what people have been doing since cave times: holding up a mirror to stories and dangers they see, smell and hear.

“Now is not the time to blink,” Cato said, but while people are questioning so much today, they still should trust in their judgments. “‘Did I really step in it?’ Yes, you did.”

The festival runs through March 19. Its ads boast about 135 films from 25 nations over six days on three screens at two venues. Prize announcements are scheduled for March 19.

The press day let filmmakers talk about their work and included a tantalizing preview montage of the offerings.

“Undocumented,” a film that has already received some notice amid the national debate about immigration, is the story of Harold Fernandez, an undocumented 13-year-old who came to the U.S. with his 11-year-old brother on a treacherous ocean journey to join their undocumented parents.

Fernandez is now Dr. Harold Fernandez, a U.S. citizen and cardiothoracic surgeon who studied at both Princeton and Harvard and holds the lowest fatality rate among his peers in New York State.

Patricia Shih, the movie’s executive producer, is a lifelong professional singer and songwriter who was inspired to become a filmmaker by Fernandez’s story.

Shih is both the daughter and the mother of immigrants. Her father, Shih, or Frank, Pao-Hu, immigrated from China in the 1940s, after the Chinese Exclusion Act was repealed. Shih is also the adoptive mother of a now-adult daughter from Korea.

“No Human Involved,” by director and producer PJ Starr, documents the work of people seeking justice in the death of Marcia Powell, who was sentenced to 27 months in an Arizona prison for prostitution and died after being locked in a metal cage in the 107-degree desert sun for four hours. The producer’s description of the movie says that prison guards refused to give her water and subjected her to ridicule when she begged for help.

“Between Neighborhoods” by Seth Fein is exactly what you might look for at a Queens film festival. It’s a diptych, or split-screen, experimental documentary tracing the past and still-developing history of Queens’ Flushing Meadows Corona Park and the Unisphere as the geographic and demographic center of the New York metropolitan empire as envisioned by Robert Moses. It includes the story of developers’ continued desire to build on the park’s land.

Other films will transport you away from politics.

“Man’s Best” by Bayside’s Seth McTigue is about a depressed, lonely man desperately trying to save his dog. “Parallel Dreams” by Aleksandar Kostic presents both live performance and short film in one project, a story involving the work of artist Joseph Cornell.

“Dillzilla: Titan of Terror!” is a spoof of 1950s horror classics by Jackson Heights’ own Elizabeth Pasieczny, an animator by trade who previously produced “Zombie Pickles from Space” and other short films. The star, Pickle Man, mysteriously contracts a biohazard infection and starts to grow uncontrollably every time he gets angry. The marinated main man must heal himself before he destroys the entire town.

If enjoyment or politics inspire you to pick up a camera yourself, submission season for the 2018 Queens World Film Festival opens in May.