Rafael Domenech’s “Model to exhaust this place,” left, and the separate exhibit “In Practice: Total Disbelief,” with works including “ELG Familial Archives 2019” by Emilie Louise Gossiaux are on display at SculptureCenter. 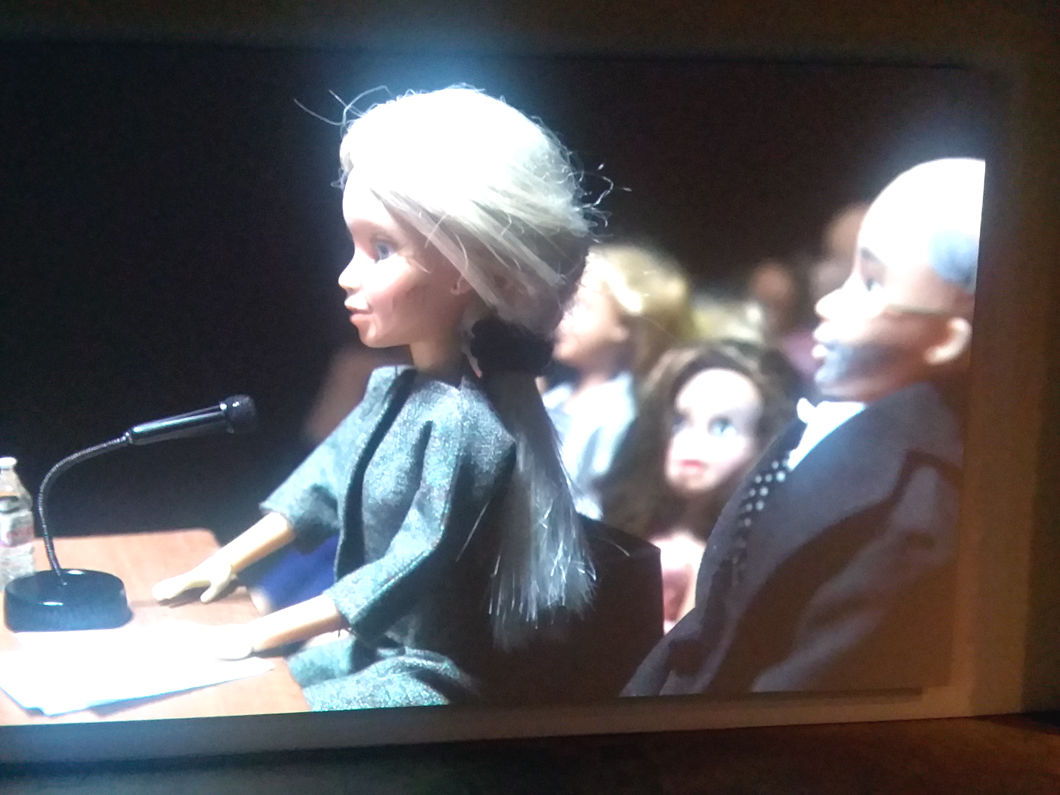 “Process Entanglement Procedure (PEP), 2019” is a video by Jordan Strafer showing at SculptureCenter.

Rafael Domenech’s “Model to exhaust this place,” left, and the separate exhibit “In Practice: Total Disbelief,” with works including “ELG Familial Archives 2019” by Emilie Louise Gossiaux are on display at SculptureCenter.

“Process Entanglement Procedure (PEP), 2019” is a video by Jordan Strafer showing at SculptureCenter.

By proximity, extension and definition, the atmosphere art is created in can’t help but become part of it.

Presented by SculptureCenter in Long Island City, Cuban artist Rafael Domenech’s “Model to exhaust this place” merges his sculpture with the gallery’s ground floor, the site of a former trolley repair shop. With a strong focus on how physical dimensions affect the people living in them, Domenech uses construction site materials to powerful effect, creating a stripped-down, metal-heavy atmosphere that’s somber but also welcoming.

Domenech’s architectural installation is a sculpture, pavilion, meeting venue and decentered architectural model working in concert with an intact though largely unused industrial gantry system. Reflective of LIC itself, the urban setting created delivers a universal message applicable across all geographical areas: The physical specs of what we’re close to become part of who we are.

Meant to showcase a book as a unit, large-scale, the panels display writing by the artist. Quotes from exiled Cuban poet, novelist, essayist and critic Severo Sarduy, printed in bold red font  on narrow pale wooden chairs, underscore just how much the physical presentation of literary material can modify the perception of it.

The theme of “Model to exhaust this place” centers around how widely used measurements and metrics inform and function as the literal building blocks for people’s experiences, and understanding of the world around themm — a sort of metrics matrix. Rattemeyer confirms the observation that all people are unavoidably shaped by structures and standardized precedents.

SculptureCenter’s other new exhibit, “In Practice: Total Disbelief,” featuring works by 13 newly commissioned artists and artist teams, shows how accepted truths and social norms are constructed and questioned as well as how they’re questioned. The exhibit delves deeply into and deconstructs the nature and structure of disbelief itself, whether the disbelief is in response to conflicting information that doesn’t add up, or comes from the experience of how faith can sour into suspicion when the believer is given reasons to stop believing.

Jordan Strafer’s “Process Entanglement Procedure (PEP), 2019” features a video of a woman represented by a doll in a courtroom of dolls responding to a demeaning interrogation by unseen opposing counsel. The contempt in the voice, even as a nonvisual presence, calls attention to how disbelief can become an abusive force as the quest for justice can be carried out abusively and unjustly: how skepticism can protect, but also harm.

An autopsy-esque treatment of memories and loss by Emilie Louise Gossiaux, “ELG Familial Archives 2019,” features literally truncated recollections through body parts — among them the breasts, ribcage, tattooed forearms and ears of family members as well as the artist’s own. Gossiaux, who lost her vision while an art student, created the pieces from memory using foam, stoneware and paint. The forensic quality of limbs laid out on a table — Gossiaux’s arm bearing a butterfly tattoo next to her father’s branded with a crucifix — amplifies the display’s stunning power.

“What artists do best is look at things a different way and through their perspective, make us look anew,” says Rattemeyer.

‘Model to exhaust this place’ and ‘In Practice: Total Disbelief’

This article was corrected to clarify whose words are printed where in Rafael Domenech's work "Model to exhaust this place."