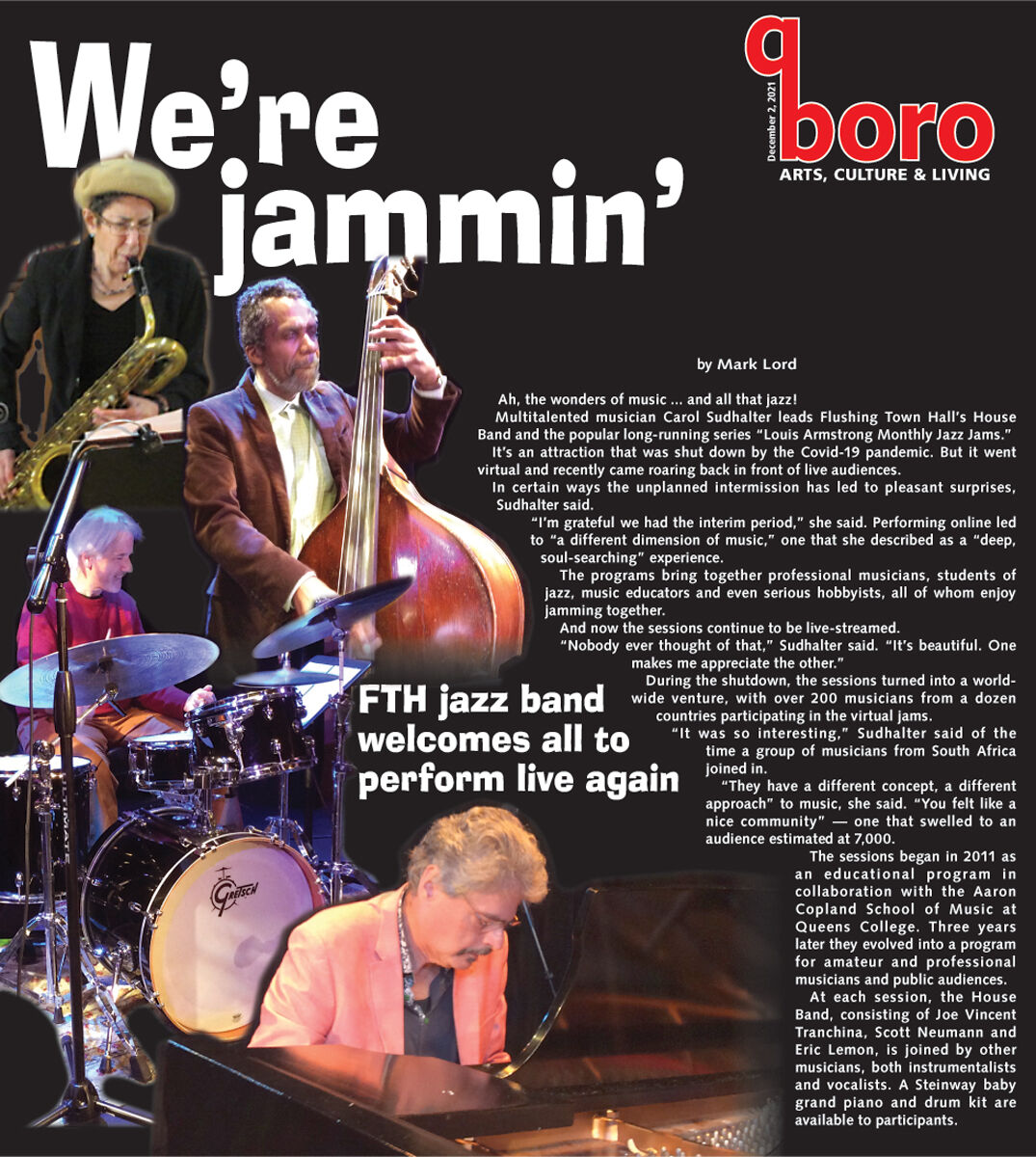 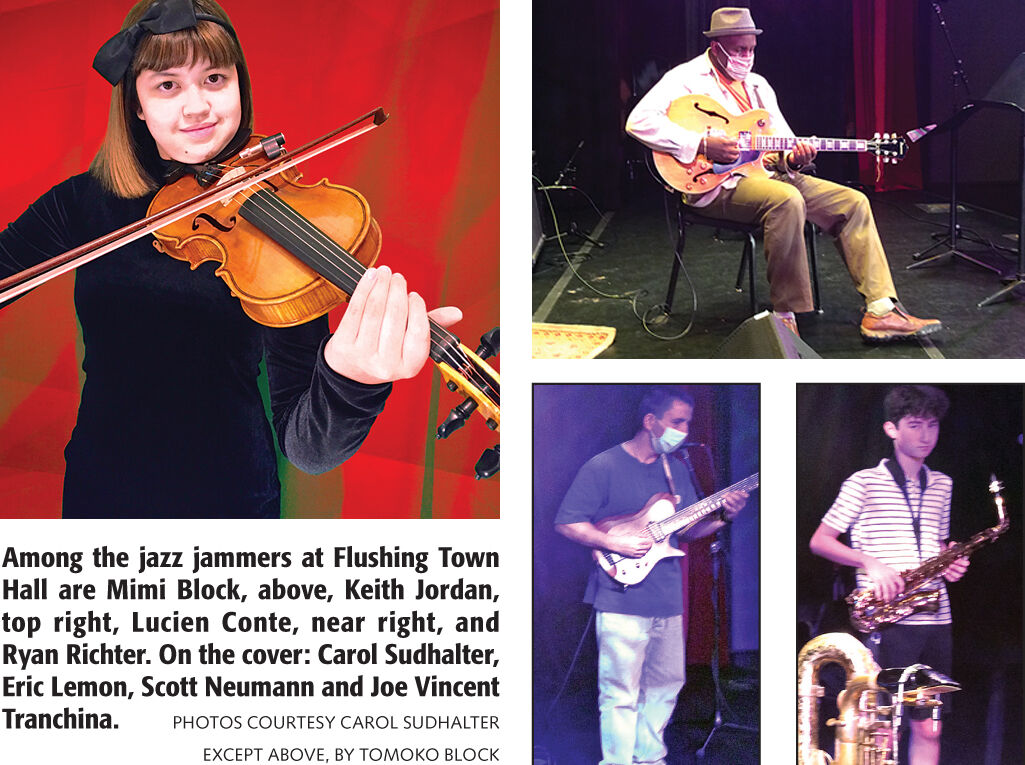 Among the jazz jammers at Flushing Town Hall are Mimi Block, above, Keith Jordan, top right, Lucien Conte, near right, and Ryan Richter.

Among the jazz jammers at Flushing Town Hall are Mimi Block, above, Keith Jordan, top right, Lucien Conte, near right, and Ryan Richter.

Ah, the wonders of music ... and all that jazz!

It’s an attraction that was shut down by the Covid-19 pandemic. But it went virtual and recently came roaring back in front of live audiences.

In certain ways the unplanned intermission has led to pleasant surprises, Sudhalter said.

“I’m grateful we had the interim period,” she said. Performing online led to “a different dimension of music,” one that she described as a “deep, soul-searching” experience.

The programs bring together professional musicians, students of jazz, music educators and even serious hobbyists, all of whom enjoy jamming together.

And now the sessions continue to be live-streamed.

“Nobody ever thought of that,” Sudhalter said. “It’s beautiful. One makes me appreciate the other.”

During the shutdown, the sessions turned into a worldwide venture, with over 200 musicians from a dozen countries participating in the virtual jams.

“It was so interesting,” Sudhalter said of the time a group of musicians from South Africa joined in.

“They have a different concept, a different approach” to music, she said. “You felt like a nice community” — one that swelled to an audience estimated at 7,000.

The sessions began in 2011 as an educational program in collaboration with the Aaron Copland School of Music at Queens College. Three years later they evolved into a program for amateur and professional musicians and public audiences.

At each session, the House Band, consisting of Joe Vincent Tranchina, Scott Neumann and Eric Lemon, is joined by other musicians, both instrumentalists and vocalists. A Steinway baby grand piano and drum kit are available to participants.

Every so often an emerging artist knocks everyone for a loop. Such was the case with a young performer named Mimi Block, who first appeared on the Flushing Town Hall scene — virtually — in August, playing her violin and singing.

Block, who lives in Astoria, was born with autism and severe developmental delay, according to her mother, Tomoko Block.

Doctors said at the time that Mimi would never talk. She was also unable to walk or move her fingers.

By the time she was 4, her parents, both musicians, noticed she had a special affinity for music. Doctors recommended that she start playing the violin as a hand exercise.

Now, at the age of 19, she plays “almost at a professional level,” her mother said.

“I take it very seriously,” Mimi said in a written response to an email from the Chronicle. “I see all music by visuals.”

She only began to sing two years ago, Tomoko said of her daughter. But, Mimi explained, “Singing to me is more connected to my soul, my emotions and my own expressions. I feel singing is natural to me. I often get very emotional while singing.”

To that, she added, “The fingers have limits, but the voice doesn’t.”

She will be displaying her prodigious talents at the next in-person jazz session on Dec. 8, which begins at 7 p.m. Sessions take place the second Wednesday of each month.

In addition to welcoming newcomers, Sudhalter is calling for “some of the old guard” to come back, in preparation for a planned all-star jam next summer.

You can join the jam or just sit back and listen. Virtual live-stream will be available on the hall’s Facebook page. In-person tickets are $10; they’re free to members, students and jamming musicians. Proof of vaccination is required, along with ID and masks. For more, visit flushingtownhall.org or the hall’s Facebook page, or call (718) 463-7700.