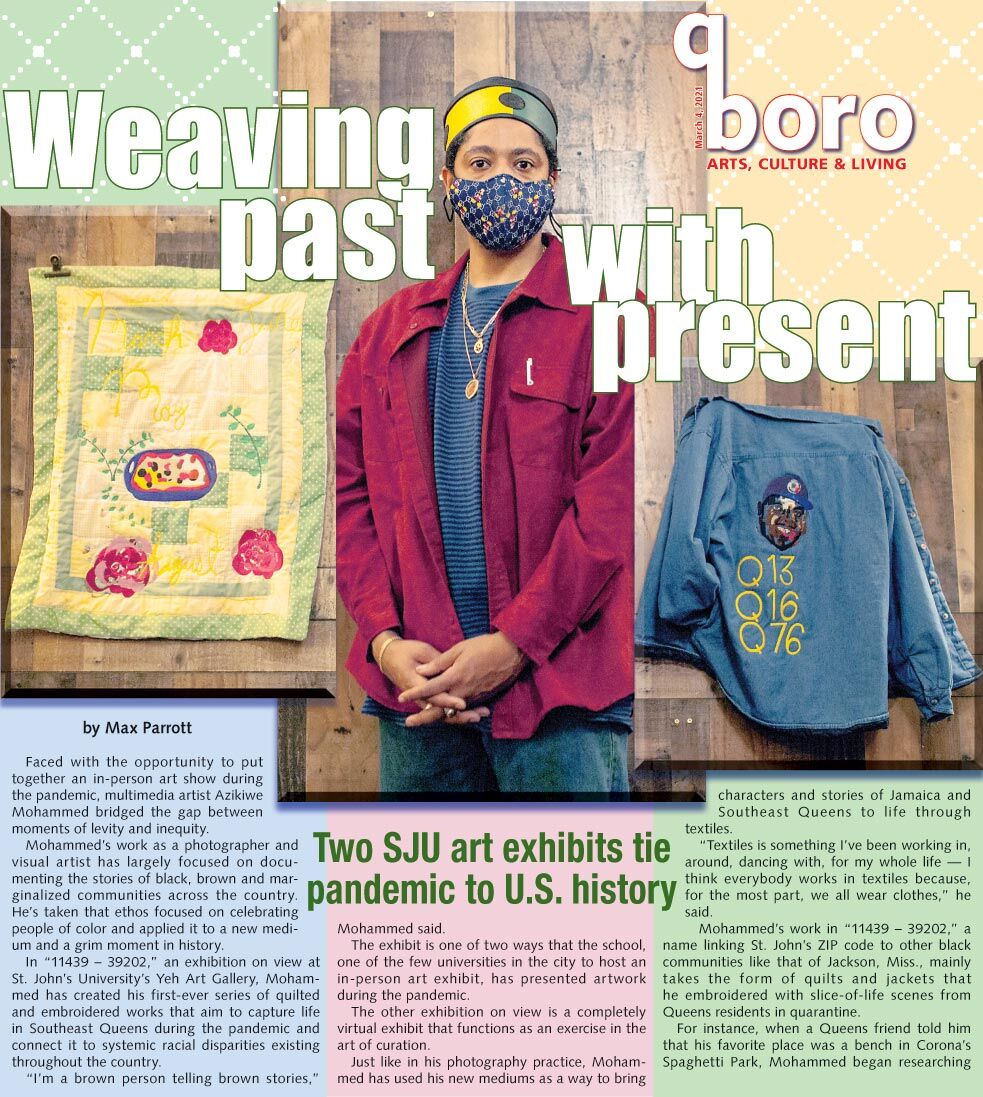 Azikiwe Mohammed and his works. 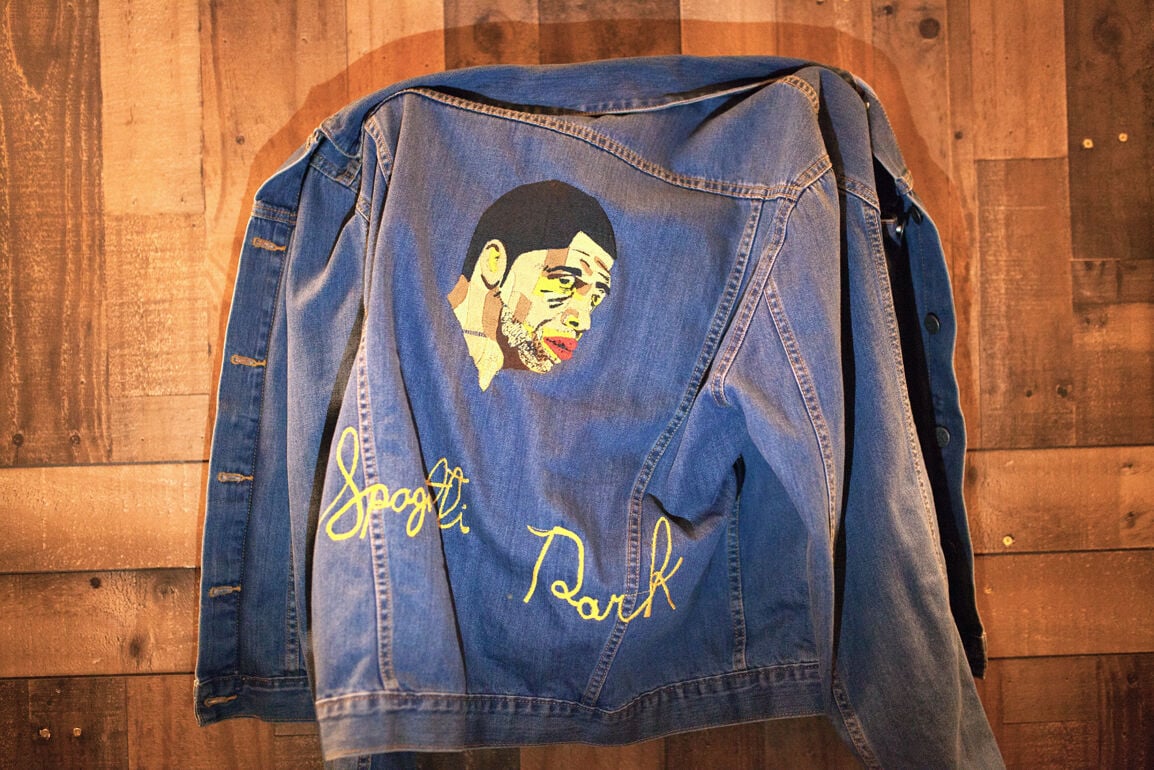 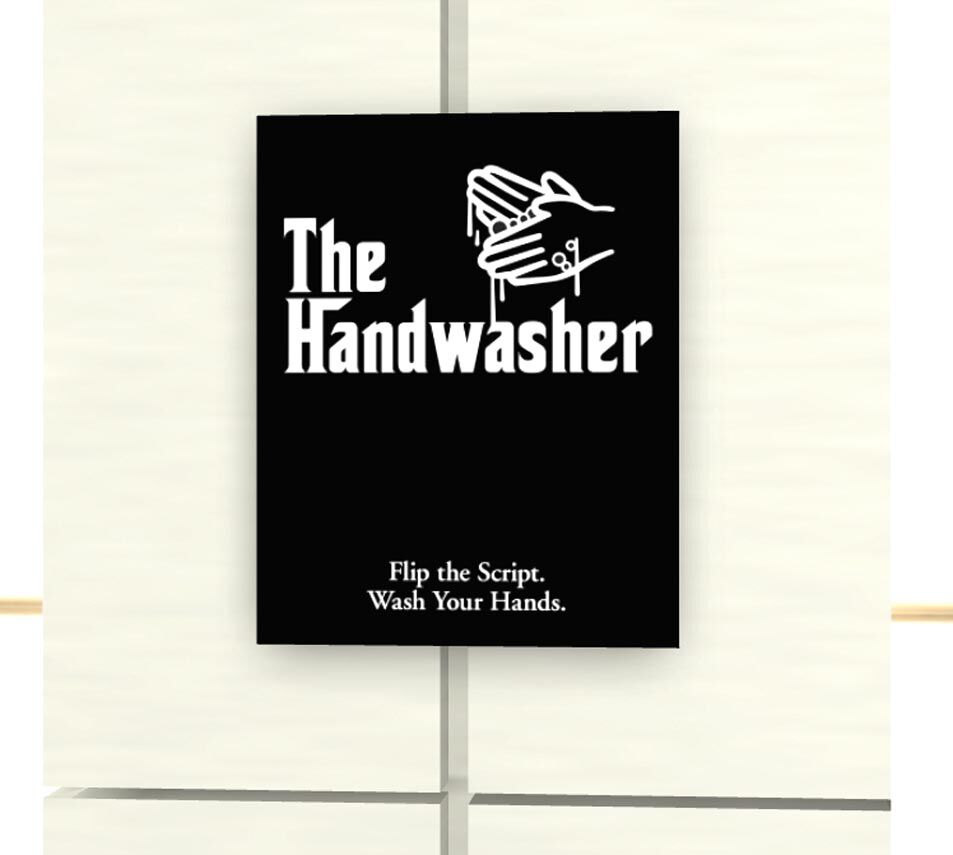 Azikiwe Mohammed and his works.

Faced with the opportunity to put together an in-person art show during the pandemic, multimedia artist Azikiwe Mohammed bridged the gap between moments of levity and inequity.

Mohammed’s work as a photographer and visual artist has largely focused on documenting the stories of black, brown and marginalized communities across the country. He’s taken that ethos focused on celebrating people of color and applied it to a new medium and a grim moment in history.

In “11439 – 39202,” an exhibition on view at St. John’s University’s Yeh Art Gallery, Mohammed has created his first-ever series of quilted and embroidered works that aim to capture life in Southeast Queens during the pandemic and connect it to systemic racial disparities existing throughout the country.

The exhibit is one of two ways that the school, one of the few universities in the city to host an in-person art exhibit, has presented artwork during the pandemic.

The other exhibition on view is a completely virtual exhibit that functions as an exercise in the art of curation.

Just like in his photography practice, Mohammed has used his new mediums as a way to bring characters and stories of Jamaica and Southeast Queens to life through textiles.

“Textiles is something I’ve been working in, around, dancing with, for my whole life — I think everybody works in textiles because, for the most part, we all wear clothes,” he said.

Mohammed’s work in “11439 – 39202,” a name linking St. John’s ZIP code to other black communities like that of Jackson, Miss., mainly takes the form of quilts and jackets that he embroidered with slice-of-life scenes from Queens residents in quarantine.

For instance, when a Queens friend told him that his favorite place was a bench in Corona’s Spaghetti Park, Mohammed began researching and found out about a locally known Dominican bocce ball player from the park nicknamed Obama, so he created a jacket in his honor.

Besides personal anecdotes from Queens residents, he used pictures and stories from the Covid section of the Queens Memory Project, a publicly sourced online archive.

Mohammed didn’t limit himself to Queens either. The Obama jacket hangs next to an embroidery of a church that was burned down during the Civil Rights era that Mohammed said he included to connect the pandemic to past instances of racial inequity.

All the works hang in an immersive log-cabin environment, that Mohammed constructed in the gallery space to evoke domestic spaces where quilts were traditionally produced.

The biggest break from his normal way of creating art, Mohammed said, was that the pandemic disrupted his usual patterns of exploring and finding people in stories, which normally involves taking a man-in-the-street approach of going to parks and bars, and meeting new faces.

Cut off from his normal habits by the pandemic, Mohammed, who lives in Manhattan, said that he leaned on friends who live or grew up in Queens to relate the texture of the borough to him.

As opposed to Mohammed’s focus on physical space, St. John’s other exhibition, “Unprecedented: Posters from a World on Pause,” gave a group of aspiring curators the opportunity to test the limits of art software on the virtual plane.

The student curators looked through thousands of public domain artworks that were created through a collaboration between the activist organization the Amplifier Project and the United Nations as a public poster campaign to the pandemic and picked the most effective.

“There was no federal response to the pandemic like FDR during World War II,” said professor Susan Rosenberg.

She encouraged her students to think about what they would want that to look like and create a public health narrative through their choices.

Appointments to visit the Yeh Gallery to view Mohammed’s exhibit through April 25 can be made by contacting its director at (718) 990-7476. “Unprecedented” can be viewed online through the end of March at sjuartgallery.org.