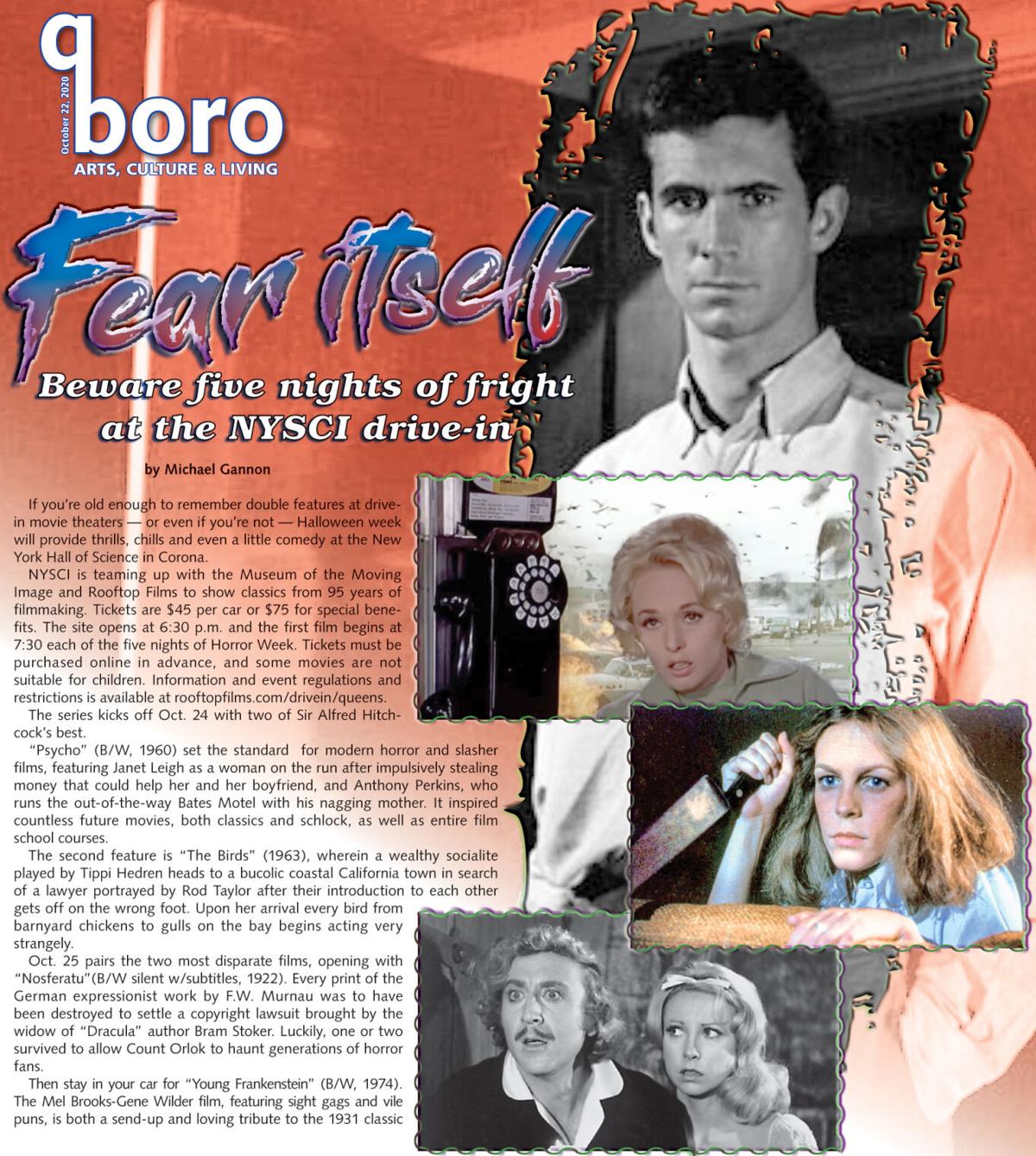 On the cover: Hitchcock classics “Psycho” and “The Birds; comedy “Young Frankenstein”; and a small indie titled “Halloween.” 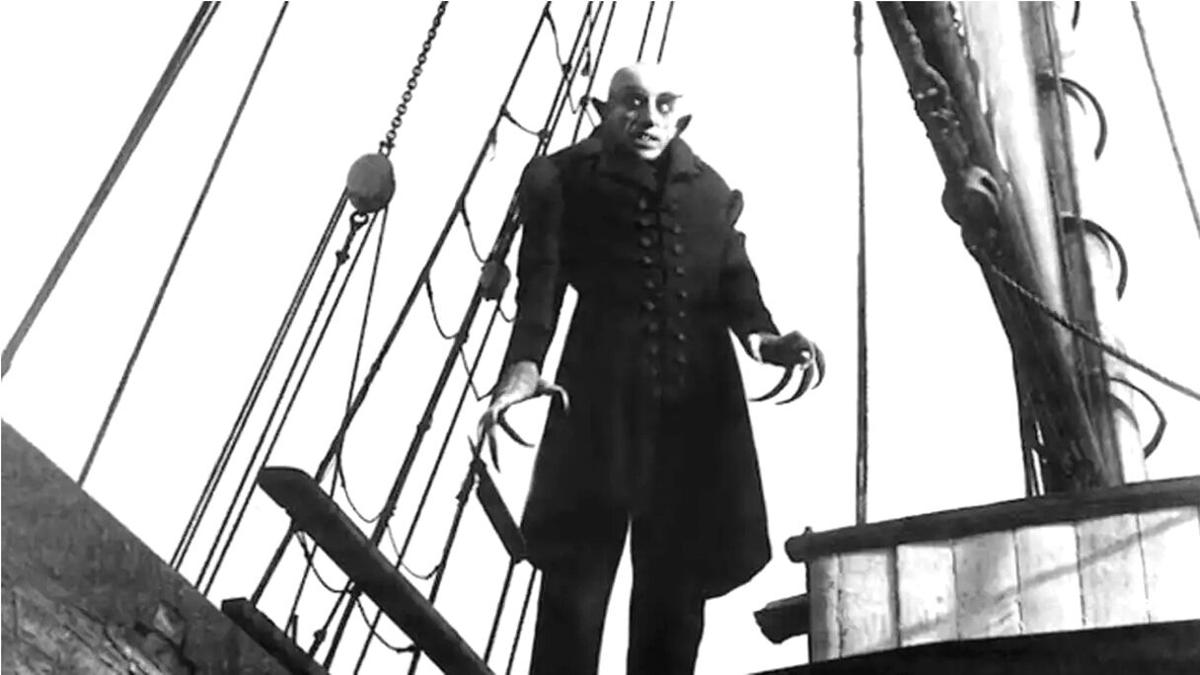 “Nosferatu,” a silent classic, is coming to the New York Science Center on Oct. 25.

On the cover: Hitchcock classics “Psycho” and “The Birds; comedy “Young Frankenstein”; and a small indie titled “Halloween.”

“Nosferatu,” a silent classic, is coming to the New York Science Center on Oct. 25.

If you’re old enough to remember double features at drive-in movie theaters — or even if you’re not — Halloween week will provide thrills, chills and even a little comedy at the New York Hall of Science in Corona.

NYSCI is teaming up with the Museum of the Moving Image and Rooftop Films to show classics from 95 years of filmmaking. Tickets are $45 per car or $75 for special benefits. The site opens at 6:30 p.m. and the first film begins at 7:30 each of the five nights of Horror Week. Tickets must be purchased online in advance, and some movies are not suitable for children. Information and event regulations and restrictions is available at rooftopfilms.com/drivein/queens.

The series kicks off Oct. 24 with two of Sir Alfred Hitchcock’s best.

“Psycho” (B/W, 1960) set the standard for modern horror and slasher films, featuring Janet Leigh as a woman on the run after impulsively stealing money that could help her and her boyfriend, and Anthony Perkins, who runs the out-of-the-way Bates Motel with his nagging mother. It inspired countless future movies, both classics and schlock, as well as entire film school courses.

The second feature is “The Birds” (1963), wherein a wealthy socialite played by Tippi Hedren heads to a bucolic coastal California town in search of a lawyer portrayed by Rod Taylor after their introduction to each other gets off on the wrong foot. Upon her arrival every bird from barnyard chickens to gulls on the bay begins acting very strangely.

Oct. 25 pairs the two most disparate films, opening with “Nosferatu”(B/W silent w/subtitles, 1922). Every print of the German expressionist work by F.W. Murnau was to have been destroyed to settle a copyright lawsuit brought by the widow of “Dracula” author Bram Stoker. Luckily, one or two survived to allow Count Orlok to haunt generations of horror fans.

Then stay in your car for “Young Frankenstein” (B/W, 1974). The Mel Brooks-Gene Wilder film, featuring sight gags and vile puns, is both a send-up and loving tribute to the 1931 classic “Frankenstein” with Boris Karloff. Wilder’s Frederick Frankenstein, an American doctor and medical professor, heads to Transylvania after learning he is in his great-grandfather’s will, inheriting a castle (with lab equipment from the 1931 movie); two lab assistants, the comely Inga and the less-so Igor (pronounced Igor); and a strange housekeeper, Frau Blücher.

Modern films are on the marquee on Oct. 28. In “Get Out” (2017) Chris Washington, a young African-American photographer, and his white girlfriend go to her family’s country place for Chris to meet her parents. They’re pleasant, if a little overbearing, but he senses something is a bit off. He has no idea. Writer-Director Jordan Peele won the Oscar for Best Original Screenplay.

That is followed up by “The Babadook“ (2014), from Australia, in which a newly widowed mother is raising her 6-year-old son alone. The boy has become fascinated with a pop-up book that just appears in their home about Mr. Babadook, a boogey-man who is always up to no good. Then young Sam begins blaming him for strange goings-on; later he tells his mom they need to protect themselves ...

The first show on Oct. 30 is “Halloween” (1978). Director John Carpenter was heavily influenced by “Psycho” when crafting the tale of Michael Myers, the silent boy who killed his sister on Halloween night in 1963, now a man who has escaped from an asylum for the criminally insane. His doctor, Sam Loomis, tells anyone who will listen that Michael is heading back to Haddonfield. Sam Loomis was the name of Leigh’s boyfriend in “Psycho.” And, as providence would have it, Carpenter cast his second choice, Leigh’s daughter, Jamie Leigh Curtis, 19, as reluctant heroine Laurie Strode.

The second flick will be “The Texas Chainsaw Massacre” (1974), which chronicles the homicidal habits and peculiar dietary choices of the Sawyer family, particularly a son nicknamed “Leatherface.”

Horror week closes, suitably, on Oct. 31 with a pair of dark comedies.

“Little Shop of Horrors” (1986) based on the off-Broadway musical and a 1960 film, tells the story of Seymour Krelborn, a down-and-out employee at a down-and-out flower shop on Skid Row. Things change for the better temporarily when Seymour discovers an interesting new plant. The show is stolen by Steve Martin and Bill Murray cameos, and by Levi Stubbs of the Motown group The Four Tops as the voice of the plant who belts out the best-named Oscar-nominated song in history.

The curtain call is “Beetlejuice” (1988) in which Michael Keaton’s title character has spent his centuries-long afterlife haunting and disrupting people, places and things. Now a young Winona Ryder needs him to help the newly departed Geena Davis and Alec Baldwin rest in peace with the new owners of their home.