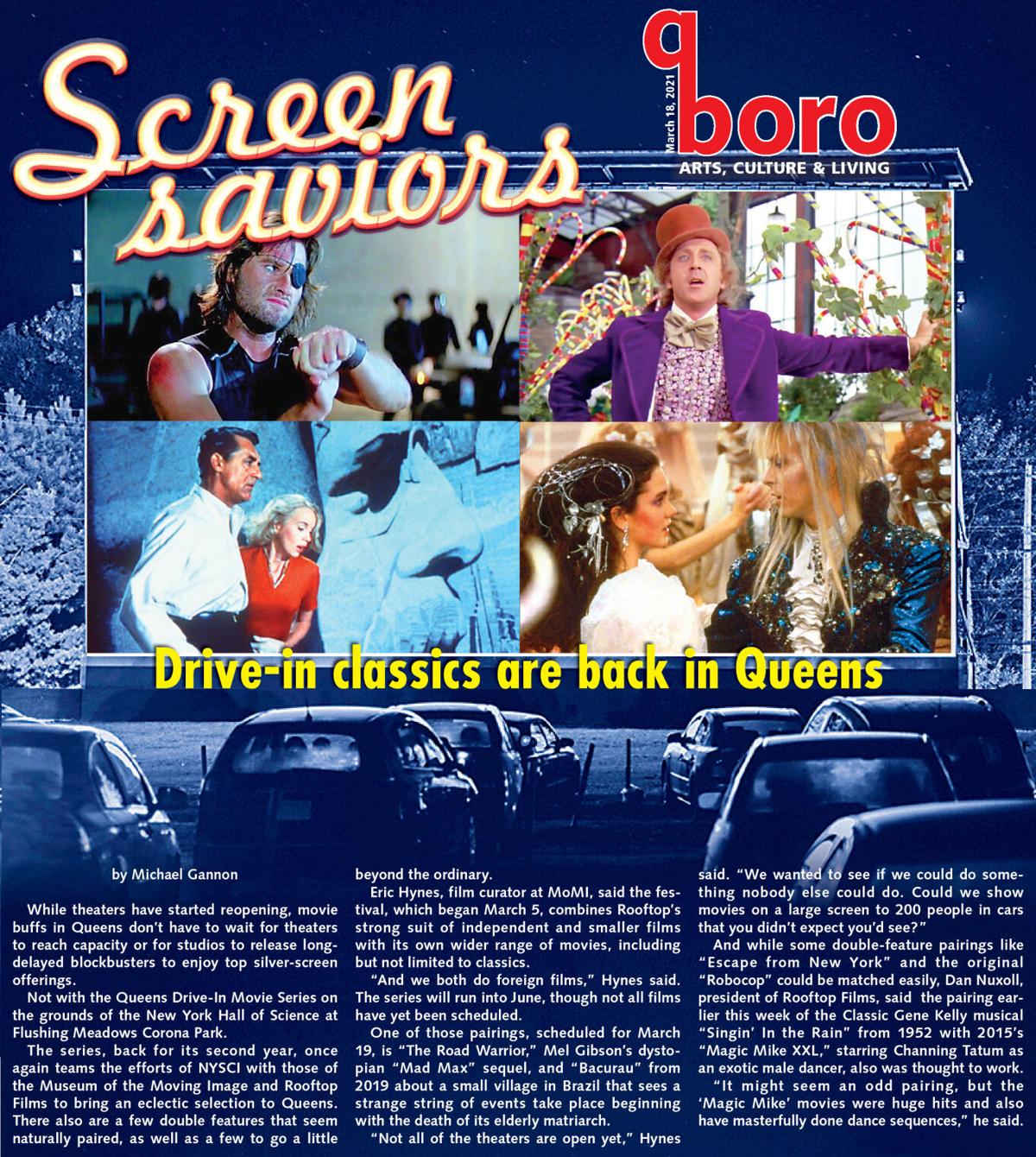 Kurt Russell in “Escape From New York”; Gene Wilder in “Willy Wonka and the Chocolate Factory”; Cary Grant and Eva Marie Saint in “North By Northwest”; and Jennifer Connelly and David Bowie in “Labyrinth.” 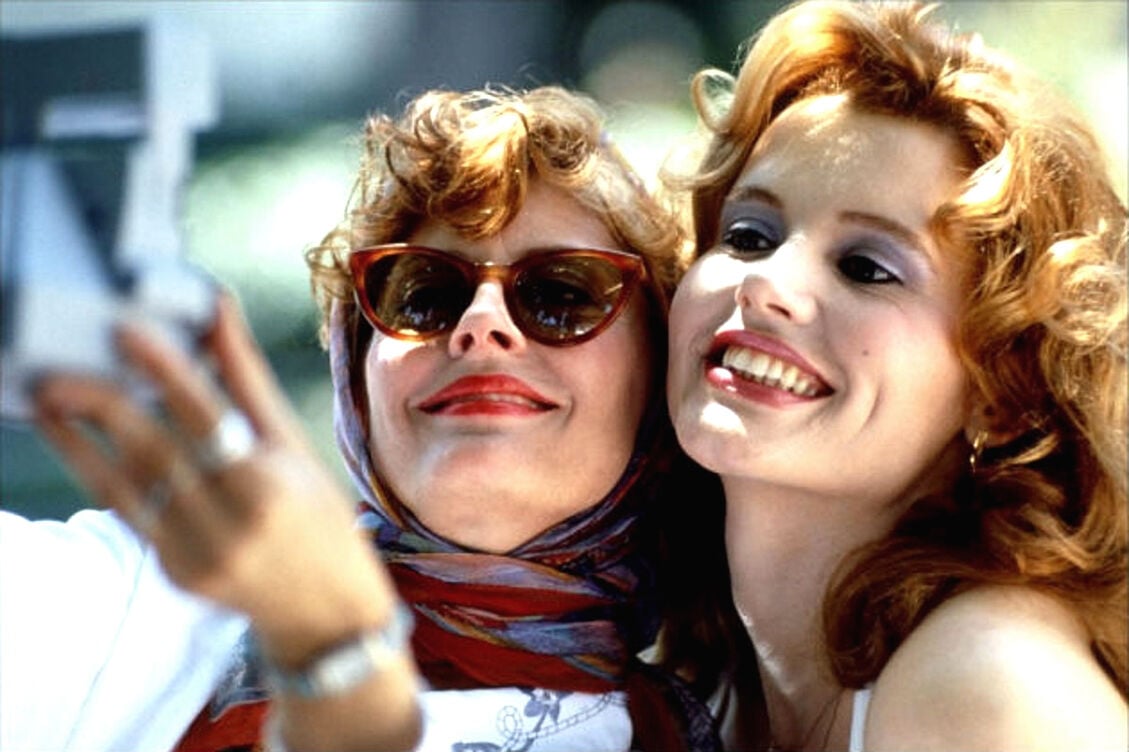 Kurt Russell in “Escape From New York”; Gene Wilder in “Willy Wonka and the Chocolate Factory”; Cary Grant and Eva Marie Saint in “North By Northwest”; and Jennifer Connelly and David Bowie in “Labyrinth.”

While theaters have started reopening, movie buffs in Queens don’t have to wait for theaters to reach capacity or for studios to release long-delayed blockbusters to enjoy top silver-screen offerings.

Not with the Queens Drive-In Movie Series on the grounds of the New York Hall of Science at Flushing Meadows Corona Park.

The series, back for its second year, once again teams the efforts of NYSCI with those of the Museum of the Moving Image and Rooftop Films to bring an eclectic selection to Queens. There also are a few double features that seem naturally paired, as well as a few to go a little beyond the ordinary.

Eric Hynes, film curator at MoMI, said the festival, which began March 5, combines Rooftop’s strong suit of independent and smaller films with its own wider range of movies, including but not limited to classics.

“And we both do foreign films,” Hynes said. The series will run into June, though not all films have yet been scheduled.

One of those pairings, scheduled for March 19, is “The Road Warrior,” Mel Gibson’s dystopian “Mad Max” sequel, and “Bacurau” from 2019 about a small village in Brazil that sees a strange string of events take place beginning with the death of its elderly matriarch.

“Not all of the theaters are open yet,” Hynes said. “We wanted to see if we could do something nobody else could do. Could we show movies on a large screen to 200 people in cars that you didn’t expect you’d see?”

And while some double-feature pairings like “Escape from New York” and the original “Robocop” could be matched easily, Dan Nuxoll, president of Rooftop Films, said the pairing earlier this week of the Classic Gene Kelly musical “Singin’ In the Rain” from 1952 with 2015’s “Magic Mike XXL,” starring Channing Tatum as an exotic male dancer, also was thought to work.

“It might seem an odd pairing, but the ‘Magic Mike’ movies were huge hits and also have masterfully done dance sequences,” he said. “It’s a good way to show that this could be considered reimagining the classic musical and not deviating from it.”

Nuxoll also said it is an opportunity for those too young to have seen “Singin’ in the Rain” or other classics anywhere but on television or on DVD to see them on a large screen as originally intended.

The cost of admission is $35 per car for a single feature and $39 for a double feature, but it can be as low as $20 or as high as $45 plus a small fee. Season passes cost $75 per car plus fee. Admission begins at 6:30 or 7 p.m. Some movies are rated R and might not be appropriate for children. Information on ratings, tickets and vehicle capacity is available online at movingimage.us.

Movies scheduled for this coming weekend include “The Road Warrior” and “Bacurau” on Friday, March 19; “Escape from New York” and “Robocop” on Saturday, March 20; and “Babe” and “Babe: Pig in the City” on Sunday, March 21.

The following weekend features “Thelma and Louise” and “Desperately Seeking Susan” on March 26; “Fast Times at Ridgemont High” and “Dazed and Confused” on March 27; and a single movie, 1971’s “Willy Wonka and the Chocolate Factory” with Gene Wilder, on March 28.

April 2 will see the science fiction favorite “Dune.” That will be followed on April 3 by the heavyweight double feature of “North by Northwest” with Cary Grant and “From Russia with Love” with Sean Connery as superspy James Bond. “Labyrinth,” the Jim Henson-George Lucas collaboration showing on Sunday, April 4, is featured prominently in MoMI’s permanent Jim Henson Exhibition.

The Saturday, April 10 double feature is the original “Shaft” from 1971 with “Boyz in the Hood.” Sunday, April 11 features the Japanese anime movie “Your Name.”

That is followed up on Friday, April 23 by “Friday” and “Straight Outta Compton.”