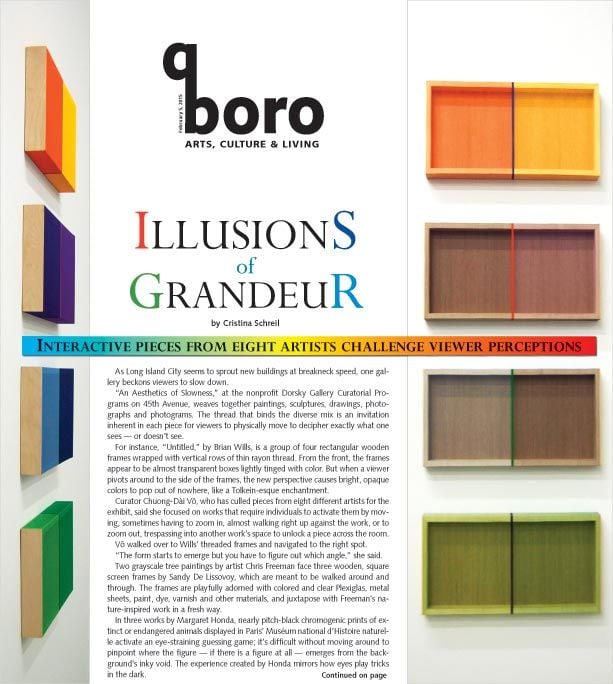 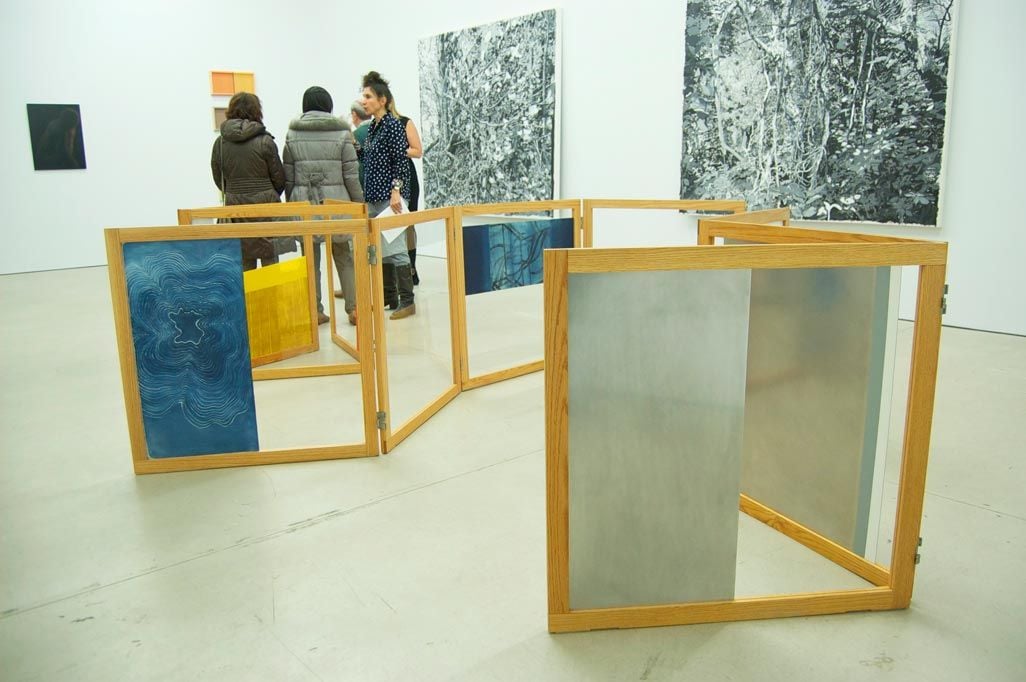 Gallery visitors and artist Jeannie Simms, center, stand behind screens by artist Sandy de Lissovoy and amid other works by Chris Freeman, Margaret Honda and Brian Wills. On the cover: “Untitled,” by Wills, from two angles.

Gallery visitors and artist Jeannie Simms, center, stand behind screens by artist Sandy de Lissovoy and amid other works by Chris Freeman, Margaret Honda and Brian Wills. On the cover: “Untitled,” by Wills, from two angles.

As Long Island City seems to sprout new buildings at breakneck speed, one gallery beckons viewers to slow down.

“An Aesthetics of Slowness,” at the nonprofit Dorsky Gallery Curatorial Programs on 45th Avenue, weaves together paintings, sculptures, drawings, photographs and photograms. The thread that binds the diverse mix is an invitation inherent in each piece for viewers to physically move to decipher exactly what one sees — or doesn’t see.

For instance, “Untitled,” by Brian Wills, is a group of four rectangular wooden frames wrapped with vertical rows of thin rayon thread. From the front, the frames appear to be almost transparent boxes lightly tinged with color. But when a viewer pivots around to the side of the frames, the new perspective causes bright, opaque colors to pop out of nowhere, like a Tolkien-esque enchantment.

Curator Chuong-Dai Vo, who has culled pieces from eight different artists for the exhibit, said she focused on works that require individuals to activate them by moving, sometimes having to zoom in, almost walking right up against the work, or to zoom out, trespassing into another work’s space to unlock a piece across the room.

Vo walked over to Wills’ threaded frames and navigated to the right spot.

“The form starts to emerge but you have to figure out which angle,” she said.

Two grayscale tree paintings by artist Chris Freeman face three wooden, square screen frames by Sandy De Lissovoy, which are meant to be walked around and through. The frames are playfully adorned with colored and clear Plexiglas, metal sheets, paint, dye, varnish and other materials, and juxtapose with Freeman’s nature-inspired work in a fresh way.

In three works by Margaret Honda, nearly pitch-black chromogenic prints of extinct or endangered animals displayed in Paris’ Museum national d’Histoire naturelle activate an eye-straining guessing game; it’s difficult without moving around to pinpoint where the figure — if there is a figure at all — emerges from the background’s inky void. The experience created by Honda mirrors how eyes play tricks in the dark.

To those who aren’t interested in the philosophies or processes behind the art, certain pieces may be too modern or unapproachable. French artist Frederic Sanchez’s stacks of brown canvasses are painted so smoothly they almost resemble UPS packaging and are propped against a wall. They look intriguing or unfinished, depending on the viewer.

In a back room, what look like candy-like blobs of stained glass — but are internet images of casualties in Afghanistan, Iraq and Gaza that were purposefully misprinted and warped by Paul Qaysi — share space with 12 ghostly black-and-white photograms made with expired analog photography paper, which Boston-based artist Jeannie Simms produced by using the gelatin photo sheets to pleasure herself in the dark before ultimately exposing them to light.

The act, Simms said, was a homage to the dying analog art form, but squeamish modern art skeptics may head for the door.

One particularly enchanting series of pencil drawings, titled “Fire in Woods I, II, III and IV,” is by Boston-based artist Ashley Billingsley. The scene depicted in all four drawings was inspired by only 20 seconds of footage in the film classic “Seven Samurai,” in which the warriors light a bonfire before the climactic battle.

The drawings, created upon drafting film for a lustrous and haunting touch, recreate the sensation of having to adjust to the jarring darkness of untamed nature at night. The textures at play in Billingsley’s work are mesmerizing and the moment she spotlights prompts a meditation on the present.

“We’re always bringing our shorthand of interpreting,” she said.