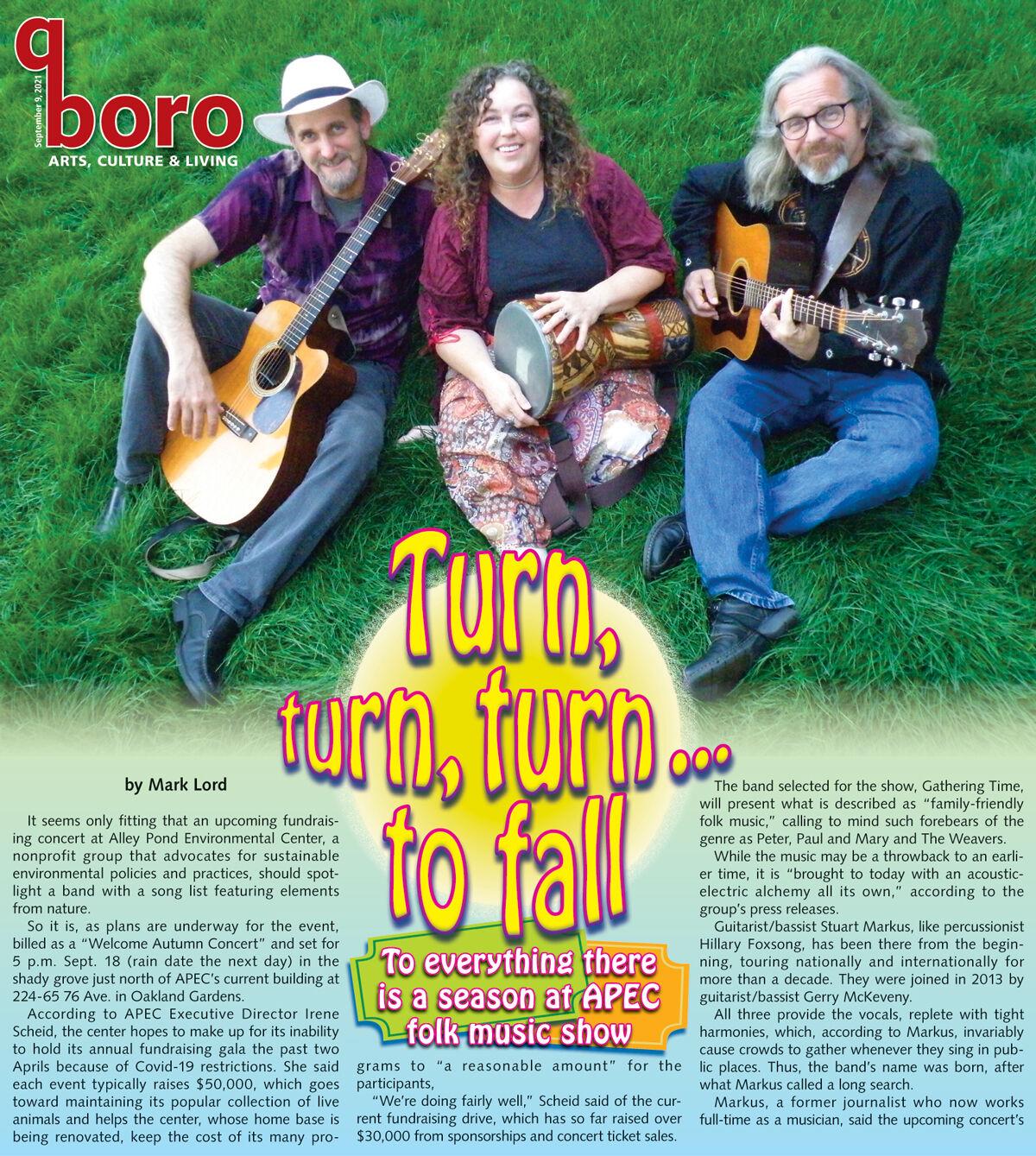 It seems only fitting that an upcoming fundraising concert at Alley Pond Environmental Center, a nonprofit group that advocates for sustainable environmental policies and practices, should spotlight a band with a song list featuring elements from nature.

So it is, as plans are underway for the event, billed as a “Welcome Autumn Concert” and set for 5 p.m. Sept. 18 (rain date the next day) in the shady grove just north of APEC’s current building at 224-65 76 Ave. in Oakland Gardens.

According to APEC Executive Director Irene Scheid, the center hopes to make up for its inability to hold its annual fundraising gala the past two Aprils because of Covid-19 restrictions. She said each event typically raises $50,000, which goes toward maintaining its popular collection of live animals and helps the center, whose home base is being renovated, keep the cost of its many programs to “a reasonable amount” for the participants,

“We’re doing fairly well,” Scheid said of the current fundraising drive, which has so far raised over $30,000 from sponsorships and concert ticket sales.

The band selected for the show, Gathering Time, will present what is described as “family-friendly folk music,” calling to mind such forebears of the genre as Peter, Paul and Mary and The Weavers.

While the music may be a throwback to an earlier time, it is “brought to today with an acoustic-electric alchemy all its own,” according to the group’s press releases.

Guitarist/bassist Stuart Markus, like percussionist Hillary Foxsong, has been there from the beginning, touring nationally and internationally for more than a decade. They were joined in 2013 by guitarist/bassist Gerry McKeveny.

All three provide the vocals, replete with tight harmonies, which, according to Markus, invariably cause crowds to gather whenever they sing in public places. Thus, the band’s name was born, after what Markus called a long search.

Markus, a former journalist who now works full-time as a musician, said the upcoming concert’s program includes titles such as The Beatles’ “Here Comes the Sun,” but he would not reveal any of the other nature-related songs that are planned.

The band’s appearance will be their third at an APEC event.

“We always enjoy playing outside as long as the weather holds out,” Markus said. ”We get a good number of young people who grew up with the music from their parents’ record collection, and young people who like the harmonizing.” Their audiences consist primarily of 50- to 70-year-olds who, he said, simply love the music.

Just as the pandemic had an impact on APEC, so it did on Gathering Time. “There was a huge drop-off for us” in bookings, Markus said, from one or two a week to one a month. And, for about a year, all their performances were canceled.

The upcoming event will honor two long-time supporters of APEC, which, for 45 years, has served as an oasis for environmental studies and is dedicated to the preservation of Alley Pond Park, open spaces and waterbodies: Juan Santiago of National Grid and Michael Serao of First Central Savings Bank.

In addition to the live music, the event will feature boxed lunches from Panera Bread, with a choice of roast turkey or vegetarian sandwiches. Tickets for the concert alone are $25 for adults and $20 for children 12 and under. Add $10 for lunch. Free parking is available. Bring lawn chairs or blankets and practice social distancing.

“We’re hoping for a lovely evening in the park to help support our organization,” Scheid said.

For tickets and further information, visit alleypond.org/welcome-autumn-concert.html or call (718) 229-4000.