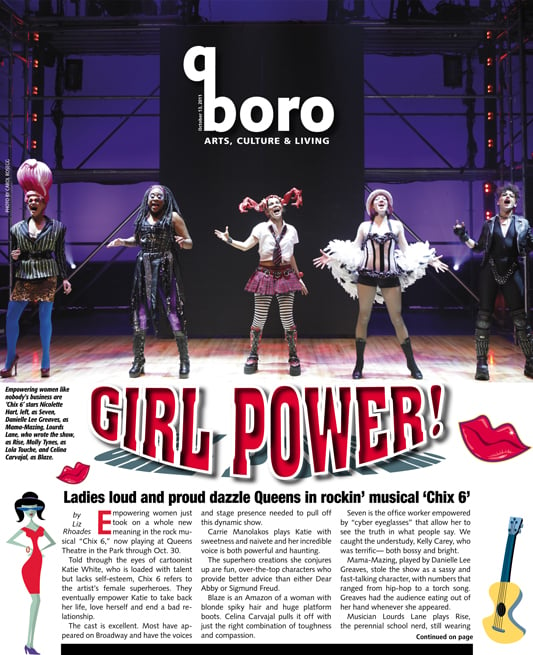 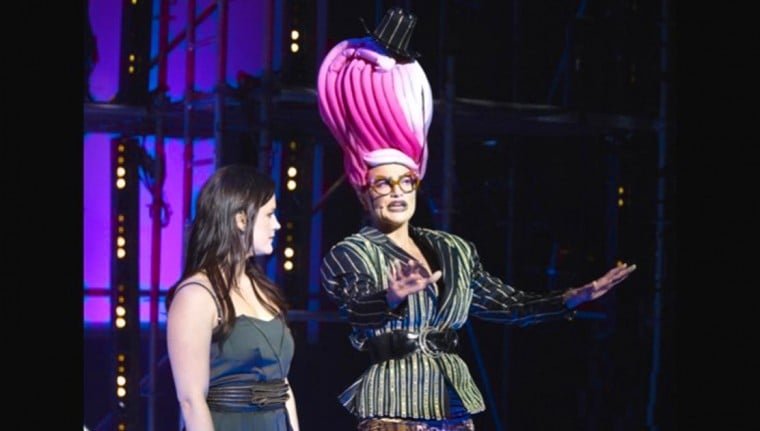 Carrie Manolakos, left, as cartoonist Katie White, gets advice from her superhero character Seven, played by Nicolette Hart in “Chix 6.”

Carrie Manolakos, left, as cartoonist Katie White, gets advice from her superhero character Seven, played by Nicolette Hart in “Chix 6.”

Empowering women just took on a whole new meaning in the rock musical “Chix 6,” now playing at Queens Theatre in the Park through Oct. 30.

Told through the eyes of cartoonist Katie White, who is loaded with talent but lacks self-esteem, Chix 6 refers to the artist’s female superheroes. They eventually empower Katie to take back her life, love herself and end a bad relationship.

The cast is excellent. Most of the performeres have appeared on Broadway and have the voices and stage presence needed to pull off this dynamic show.

Carrie Manolakos plays Katie with sweetness and naivete and her incredible voice is both powerful and haunting.

The superhero creations she conjures up are fun, over-the-top characters who provide better advice than either Dear Abby or Sigmund Freud.

Blaze is an Amazon of a woman with blonde spiky hair and huge platform boots. Celina Carvajal pulls it off with just the right combination of toughness and compassion.

Seven is the office worker empowered by “cyber eyeglasses” that allow her to see the truth in what people say. We caught the understudy, Kelly Carey, who was terrific— both bossy and bright.

Mama-Mazing, played by Danielle Lee Greaves, stole the show as a sassy and fast-talking character, with numbers that ranged from hip-hop to a torch song. Greaves had the audience eating out of her hand whenever she appeared.

Musician Lourds Lane plays Rise, the perennial school nerd, still wearing a short, pleated, plaid skirt and pigtails, who gets her revenge on a childhood bully. Lane is the creative genius who wrote the book, words and music for “Chix 6” and says she hopes to bring it to Broadway in six months. Her hot electric violin literally lights up the stage.

Lola Touche is performed by Molly Tynes, who alternately speaks with an English and French accent, because Katie can’t make up her mind which to go with. Not only can she sing and dance, but she also shows her talents as an aerialist, performing on a silk sheet high in the air.

Ellenore Scott, a beautiful dancer, portrays Lightning Girl, who does not speak but battles throughout the show with Mi Roar (CJ Tyson), the dark enemy. The two are lyrical together.

The costumes are flamboyant and loud, as are the wigs and makeup — just what you’d expect of comic book heroines.

Lane’s music runs the gamut from a circus number to a thrilling “My Life,” performed by Manolakos.

The production is never dull, filled with eye-popping visual effects. The scenery is sparse but adequate. The first act, however, was a bit long, with the entire show running two hours and 45 minutes.

Where: Queens Theatre in the Park Flushing Meadows Park

Who uses more hackneyed clichés, Lourds or Liz Rhoades? Both this fawning review and the show are exercises in tedium and triteness.