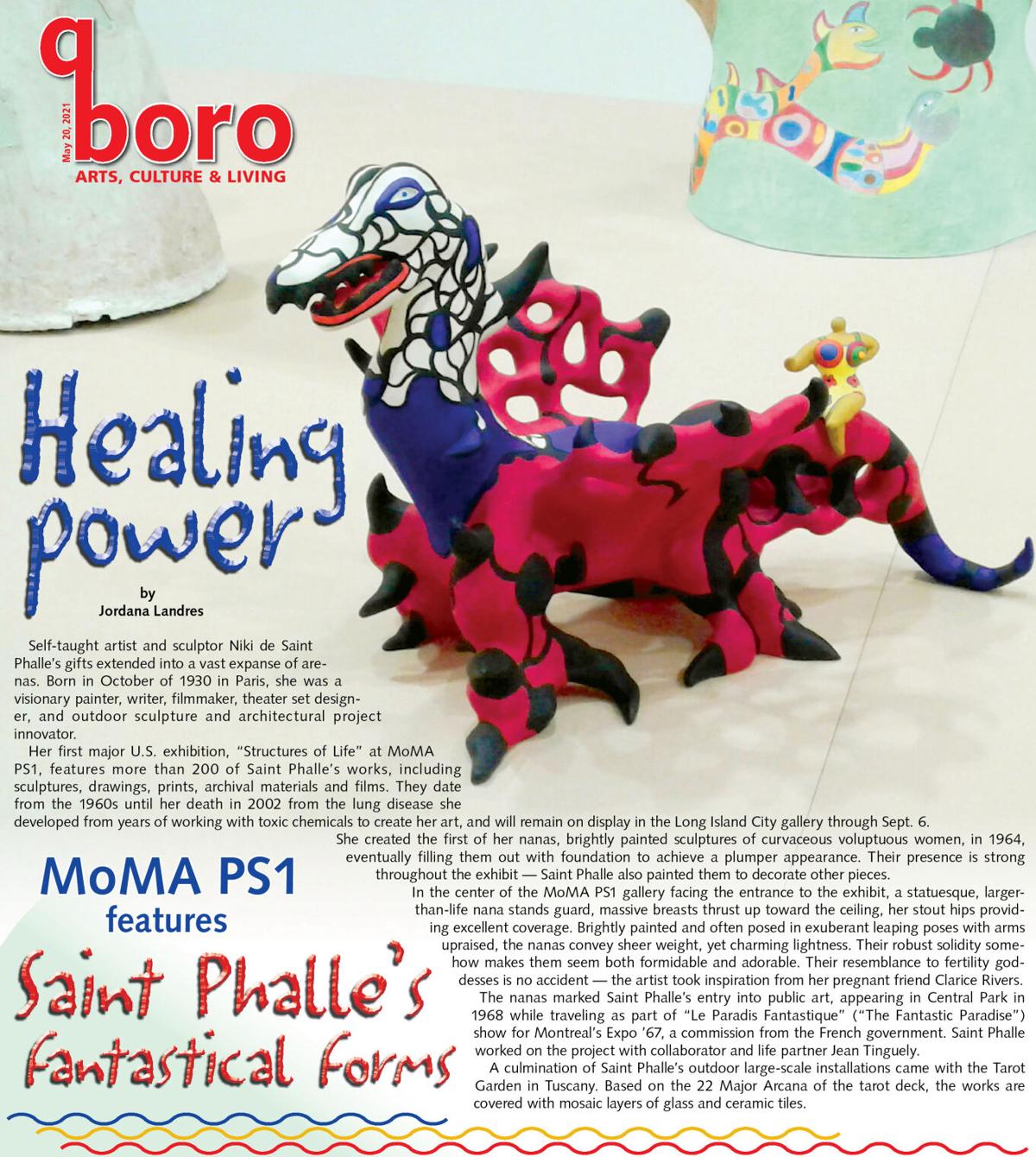 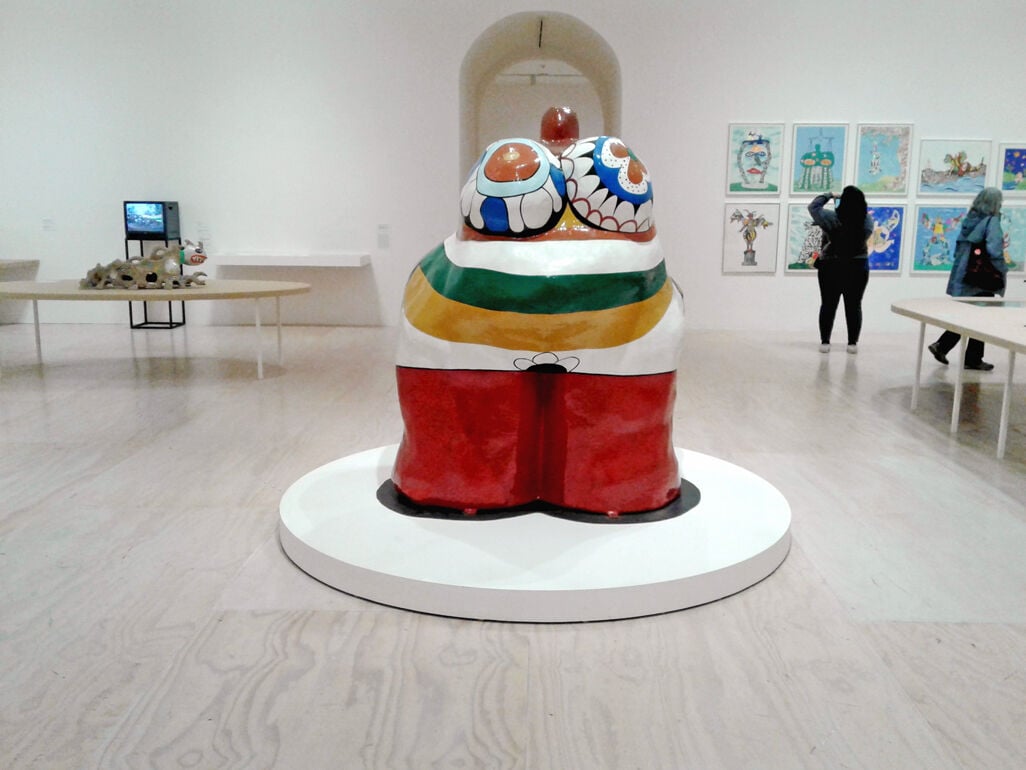 One of Niki de Saint Phalle’s nana sculptures, recalling ancient fertility goddesses, stands front and center at the exhibit of her works at MoMA PS1.

One of Niki de Saint Phalle’s nana sculptures, recalling ancient fertility goddesses, stands front and center at the exhibit of her works at MoMA PS1.

Self-taught artist and sculptor Niki de Saint Phalle’s gifts extended into a vast expanse of arenas. Born in October of 1930 in Paris, she was a visionary painter, writer, filmmaker, theater set designer, and outdoor sculpture and architectural project innovator.

Her first major U.S. exhibition, “Structures of Life” at MoMA PS1, features more than 200 of Saint Phalle’s works, including sculptures, drawings, prints, archival materials and films. They date from the 1960s until her death in 2002 from the lung disease she developed from years of working with toxic chemicals to create her art, and will remain on display in the Long Island City gallery through Sept. 6.

She created the first of her nanas, brightly painted sculptures of curvaceous voluptuous women, in 1964, eventually filling them out with foundation to achieve a plumper appearance. Their presence is strong throughout the exhibit — Saint Phalle also painted them to decorate other pieces.

In the center of the MoMA PS1 gallery facing the entrance to the exhibit, a statuesque, larger-than-life nana stands guard, massive breasts thrust up toward the ceiling, her stout hips providing excellent coverage. Brightly painted and often posed in exuberant leaping poses with arms upraised, the nanas convey sheer weight, yet charming lightness. Their robust solidity somehow makes them seem both formidable and adorable. Their resemblance to fertility goddesses is no accident — the artist took inspiration from her pregnant friend Clarice Rivers.

The nanas marked Saint Phalle’s entry into public art, appearing in Central Park in 1968 while traveling as part of “Le Paradis Fantastique” (“The Fantastic Paradise”) show for Montreal’s Expo ’67, a commission from the French government. Saint Phalle worked on the project with collaborator and life partner Jean Tinguely.

A culmination of Saint Phalle’s outdoor large-scale installations came with the Tarot Garden in Tuscany. Based on the 22 Major Arcana of the tarot deck, the works are covered with mosaic layers of glass and ceramic tiles. She lived inside one of the sculptures, a huge and huge-breasted nana named “The Empress,” until the garden opened in 1998.

Saint Phalle became drawn to art partially to process the trauma of the sexual abuse she suffered as a child by her father and from other life stresses. She believes immersing herself in art healed her.

Her originality, humor and rebelliousness asserted itself in memorable ways. Her “Tir neuf trous-Edition MAT” of 1964, one of her “shooting paintings,” contained instructions for creating a painting by firing a rifle at color pouches embedded in wood and plaster until they “bled” onto the canvas.

Yet she also was a champion of women’s rights and devoted to social justice causes, striving to destigmatize AIDS in the 1980s.

One of the multiple architectural projects Saint Phalle created with Tinguely was “Le Dragon de Knokke” (1973), for collectors Roger and Fabienne Nellens in their house garden in Knokke-le-Zoute, Belgium. The dragon’s interior contained a playroom, kitchen, bathroom and sleeping area. Made of painted polyester over sprayed cement and iron armature, the dragon stood 21 feet tall and sprawled over 110 feet long with a winding long tail resting on a curved claw. A long red forked tongue constructed as a playground slide spilled from its mouth.

The project is especially poignant considering Saint Phalle’s past. Denied safety in her own home growing up, she merged art and shelter to symbolically protect children from monsters on the outside, giving them fun and refuge inside the belly of a benevolent dragon beast.

“I wanted to create a space where you could have a new kind of life, to just be free,” she said. Art was to be not only emotionally but also physically enjoyed — and lived in, literally.

The prolific, multifaceted and stunning body of work Saint Phalle leaves behind reveals a thinker, nurturer and doer far ahead of her time. Her immense talent, compassion and drive to improve social conditions and quality of life for the sick, the vulnerable and the shunned laid a foundation for an empathic and distinctive contribution from an artist to the world.