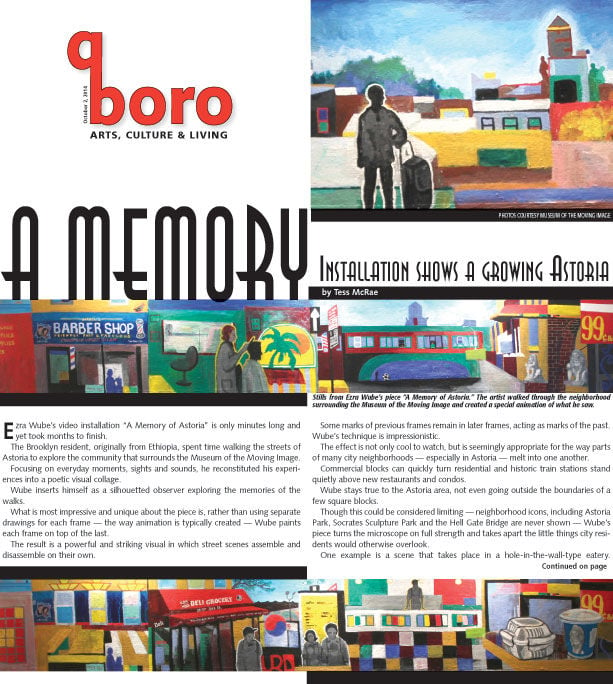 Stills from Ezra Wube’s piece “A Memory of Astoria.” The artist walked through the neighborhood surrounding the Museum of the Moving Image and created a special animation of wat he saw. 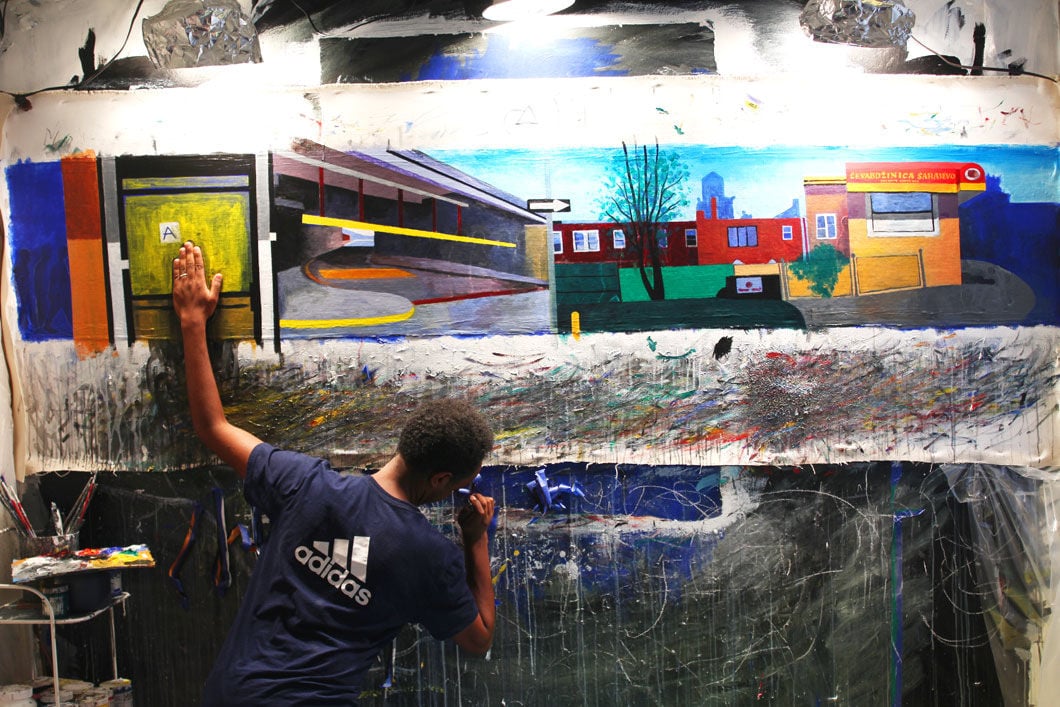 Ezra Wube works on a scene for his animated piece “A Memory of Astoria.” The artist painted one scene over another to create a rapidly changing area.

Stills from Ezra Wube’s piece “A Memory of Astoria.” The artist walked through the neighborhood surrounding the Museum of the Moving Image and created a special animation of wat he saw.

Ezra Wube works on a scene for his animated piece “A Memory of Astoria.” The artist painted one scene over another to create a rapidly changing area.

Ezra Wube’s video installation “A Memory of Astoria” is only minutes long and yet took months to finish.

The Brooklyn resident, originally from Ethiopia, spent time walking the streets of Astoria to explore the community that surrounds the Museum of the Moving Image.

Focusing on everyday moments, sights and sounds, he reconstituted his experiences into a poetic visual collage.

Wube inserts himself as a silhouetted observer exploring the memories of the walks.

What is most impressive and unique about the piece is, rather than using separate drawings for each frame — the way animation is typically created — Wube paints each frame on top of the last.

The result is a powerful and striking visual in which street scenes assemble and disassemble on their own.

Some marks of previous frames remain in later frames, acting as marks of the past. Wube’s technique is impressionistic.

The effect is not only cool to watch, but is seemingly appropriate for the way parts of many city neighborhoods — especially in Astoria — melt into one another.

Wube stays true to the Astoria area, not even going outside the boundaries of a few square blocks.

Though this could be considered limiting — neighborhood icons, including Astoria Park, Socrates Sculpture Park and the Hell Gate Bridge are never shown — Wube’s piece turns the microscope on full strength and takes apart the little things city residents would otherwise overlook.

One example is a scene that takes place in a hole-in-the-wall-type eatery. A typical Styrofoam clam container holds yellow rice and next to it sits the almost iconic blue, white and gold disposable coffee cup that takes its inspiration from Greek art.

As the image becomes more prominent, found sound of an exchange between the cashier and someone the viewer must assume is Wube is threaded in.

It’s an interaction residents of Astoria experience on an almost daily basis, and yet, projected on the museum’s walls, it becomes art.

It is interesting to see Wube’s take on the neighborhood as he is not from Queens.

The artist seems heavily influenced not only by his Brooklyn home, but also his Ethiopian culture.

The colors used include bright yellows and greens with earthy browns and reds.

His impressions reveal a diverse, rapidly changing neighborhood that the Museum of the Moving Image has lived in for more than 25 years.

The video installation greets museumgoers as soon as they walk into the lobby and though the piece may not be the reason someone would go to the museum, the four-minute video is worth watching.

Upstairs in the museum’s amphitheater, another animator’s work is analyzed.

Bill Plympton, one of the most iconic independent filmmakers and animators, has his work — including an hour-long presentation of his cartoon shorts — lining the walls.

Plympton drew all of his own cartoons and often directed and wrote the scripts as well.

The shorts are sick but really, really funny and while the younger generation may not understand the underpinnings of “Santa: The Facist” they still got a kick out of the visuals — especially a scene where Santa is arrested and tried in court for forcing Christmas to be a year-long celebration all over the world.

Together Wube’s short yet striking “A Memory of Astoria” and Plympton’s classic and satirical retrospective — of sorts — make for quite a decent afternoon spent indoors.

“A Memory of Astoria”
When: Through Jan. 8
Where: MoMI, 36-01 35 Ave., Astoria
Tickets: Free with admissionmovingimage.us