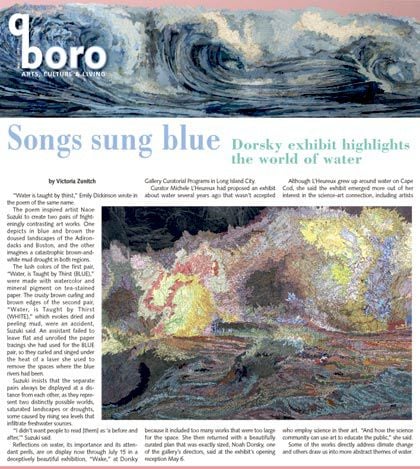 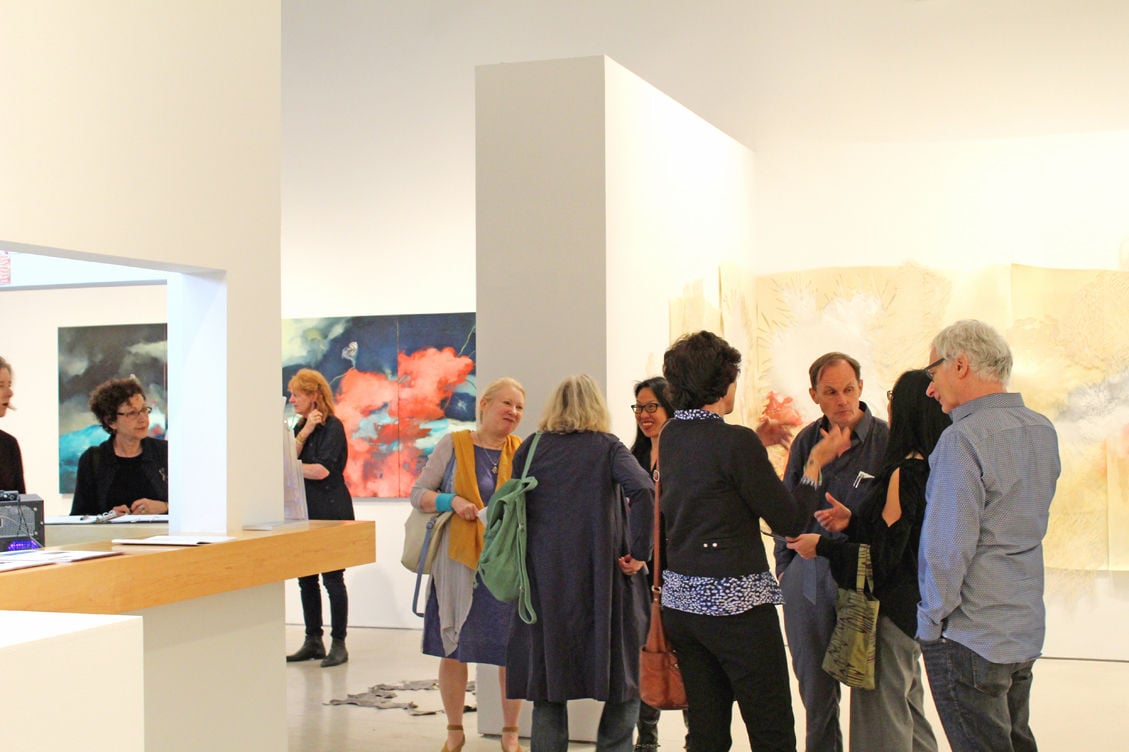 Attendees at the opening of “Wake,” standing before Resa Blatman’s large works “The Breaking,” left, and “Shrouded Reef.” On the cover: Matthew Cusick’s “Three Horses #4/20, top, and “Procella Crisium,” works made with an unusual technique.

Attendees at the opening of “Wake,” standing before Resa Blatman’s large works “The Breaking,” left, and “Shrouded Reef.” On the cover: Matthew Cusick’s “Three Horses #4/20, top, and “Procella Crisium,” works made with an unusual technique.

“Water is taught by thirst,” Emily Dickinson wrote in the poem of the same name.

The poem inspired artist Naoe Suzuki to create two pairs of frighteningly contrasting art works. One depicts in blue and brown the doused landscapes of the Adirondacks and Boston, and the other imagines a catastrophic brown-and-white mud drought in both regions.

The lush colors of the first pair, “Water, is Taught by Thirst (BLUE),” were made with watercolor and mineral pigment on tea-stained paper. The crusty brown curling and brown edges of the second pair, “Water, is Taught by Thirst (WHITE),” which evokes dried and peeling mud, were an accident, Suzuki said. An assistant failed to leave flat and unrolled the paper tracings she had used for the BLUE pair, so they curled and singed under the heat of a laser she used to remove the spaces where the blue rivers had been.

Suzuki insists that the separate pairs always be displayed at a distance from each other, as they represent two distinctly possible worlds, saturated landscapes or droughts, some caused by rising sea levels that infiltrate freshwater sources.

“I didn’t want people to read [them] as ‘a before and after,’” Suzuki said.

Reflections on water, its importance and its attendant perils, are on display now through July 15 in a deceptively beautiful exhibition, “Wake,” at Dorsky Gallery Curatorial Programs in Long Island City.

Curator Michele L’Heureux had proposed an exhibit about water several years ago that wasn’t accepted because it included too many works that were too large for the space. She then returned with a beautifully curated plan that was exactly sized, Noah Dorsky, one of the gallery’s directors, said at the exhibit’s opening May 6.

Although L’Heureux grew up around water on Cape Cod, she said the exhibit emerged more out of her interest in the science-art connection, including artists who employ science in their art. “And how the science community can use art to educate the public,” she said.

Some of the works directly address climate change and others draw us into more abstract themes of water.

“My work deals with climate change and nature,” said Resa Blatman. She has incorporated more activism into her life as an artist since learning about fracking, plastic pollution and other threats to the water supply.

“The Breaking,” in oil on wood panels, depicts birds swaying in small wheel-shaped near-nests on precariously thin sticks in an angry sea, one an owl with a nearly panicked uncertainty not usually associated with the customarily serene and self-confident bird. The wheel shapes were inspired by turning wheels, instruments of torture that appeared in the work of the 16th-century painter Pieter Bruegel.

Artist Nancy Cohen had a more intuitive experience in creating sculptures with metal, glass and other “materials that transform.” Cohen makes her own paper, which starts as a liquid, and glass, usually encountered as a solid, can be manipulated in a liquid state or as a solid powder.

Matthew Cusick also crafts his own media, carefully cutting up pieces of maps and using them as brushstrokes in his works “Three Horses #4/20” and “Procella Crisium,” which evoke water’s beauty — and its power.

When Ellen Driscoll created “Untitled, 2015,” she was in mind of the devastation wrought by Superstorm Sandy on Red Hook. Viewers see the piece while standing inside a gallery, and what they see is a room with a view of a tree. She said she added ambiguity with “windows” in the room placed here and there, looking not exactly down or up but just outward, to somewhere, into nature.

Driscoll was inspired by the ancient city of Pompeii, which had become densely urbanized before a volcano buried it, with virtually all of the trees in the city cut down. Indoors, however, it was a fashion to paint windows overlooking gardens on the walls, to replace that which was no longer there. Her “Untitled artist’s book (Water Tower)” shows a landscape where everything is flooded, but it includes high ground, “where you can pitch your tent.”

Driscoll is one artist who doesn’t mind doing what she happily labels “artsplaining,” and telling you what her pieces mean, at least to her.

“We’re going to adapt, survive, and might even look beautiful while we’re doing it,” Driscoll said.